A Transparent Pact- A Performance for Our Future 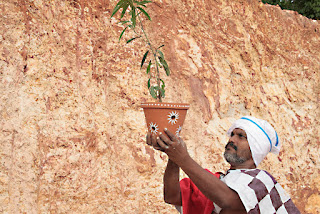 In the times of spectacles, during the days when human beings communicate between each other through understanding the symbolic values created out of the relationship between the circulated images, a project like ‘A Transparent Pact’ by a Kochi based artist, Mathai KT becomes all the more important. As the title shows the project is a transparent pact between human beings and nature. Mathai, in his concept note says, ‘Go local to go global. Protect our village, protect our earth. Submit to the earth like a plant does.’ 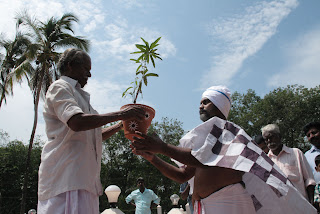 ‘A Transparent Pact’ held on 21st April 2012 at the Arakunnam Village in Kerala was a performance art project initiated by Mathai and done in collaboration with the people of the village. Inspiration for this project comes from one of the Church rituals called, ‘Adima Veykkal’, which literally means ‘to become a slave of God’. Mathai takes a relook at the ritual and he himself transforms into a slave of nature/God by picking up a plant from the premises of the Church and taking it along the village streets and finally planting it in a barren land created by the constant land digging by the building material contractors. 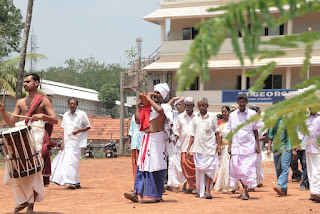 Mathai is not a performance ‘performance’ artist. As a painter he has been creating works that depict the fading glory of his village thanks to the constant exploitation of land, water and other resources by the land and building mafia. There has been a two pronged approach by this mafia. On the one hand they dig out the laterite soil for building purpose by mauling the village with the sleepless earth moving machines called JCBs. They pilfer earth out of the village and later this land is reserved for future urban developments. This is not an isolated phenomenon in Kerala. Houses, churches, temples, agricultural lands and water bodies are now seen precariously perched on land blokes, which are left untouched by the JCB machines. 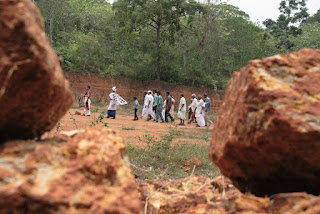 (Through the village paths)

In one of his paintings, Mathai shows a man carrying a bucket of water with a few water lilies strewn around as a last ditch effort to save a pond from ultimate and untimely decimation. In another work, he shows a suburb creeping into the precincts of a village by slowly building large Bisleri bottle like structures all around. The performance, ‘A Transparent Pact’ is a result of Mathai’s insuperable concern for nature and earth. 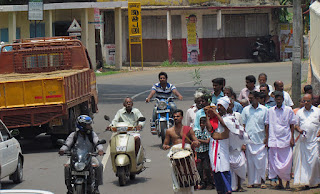 At ten in the morning on 21st April 2012, Mathai receives a mango plantain from an elder and starts his procession from the St.George Jacobite Church premises. A drummer leads the way. Friends and family members walk with the artist. Mathai wears a robe specially designed for the purpose. The half open cassock has chess board patterns on it, symbolically suggesting the ways how human beings are made pawn by the vested interests who exploit the natural resources. Like a village farmer, Mathai wears a blue dhoti and covers his head with ‘thorthu’, a locally woven light cotton towel generally used in Kerala. He bears the weight on the plant on his right shoulder. People are excited and enthused by this unexpected procession. Some of them follow Mathai. 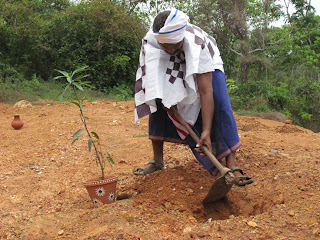 (Planting on the top of a small hill)

The procession ends on a hill top where Mathai plants the mango plantain. The whole procession reminds Jesus Christ’s painful travel to the Calvary hills where he was supposed to be crucified. In a metaphorical way Mathai tells his viewers that the plant/nature is his cross now, which he would bear happily for the common good. When he walks up to the hill, he symbolically enacts the death in cross; death of a fighter who stood for the social causes. But through the plant, Mathai suggests the possibilities of resurrection. Mathai asserts that if everyone is ready to bear his or her cross to redeem the world/earth, there could be resurrection; resurrection of earth. 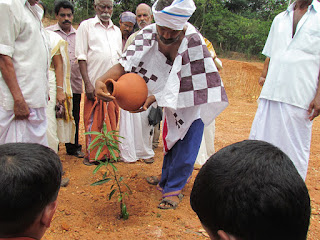 After the planting ceremony- in an Elliot-ian sense it is death and birth at once, a few artists who have come down to Arakunnam to show solidarity and support to Mathai’s performance, along with a few village based artists who do not look for fame or fortune elsewhere, travel to a vast earthen wall created by the JCB machines by their constant gnawing. The artists namely Mathai, Devadas, Roy Thampuran, Sivadas, Gopinath, Sasi, Unni, Abhilash Unny, Hochimin PH, Salim AK, Vibin George and so on work at the wall using lime and house painting brushes to produce some vital images of basic human thinking. 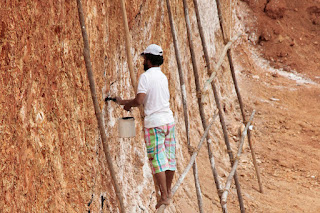 (Hochimin PH working on the wall)

Their effort is not to create stunning frescos on the wounded earth. They want to tell the world that slowly we are turning ourselves into primitive people, though innocent but condemned to draw the pictures of their basic necessities. The paintings created by the artists on this huge wall look like intentional fossils; a sort of reminders of our imminent destruction. They create a tree of life keeping laterite stones on the vast barren land from where the rich earth has been pilfered off. 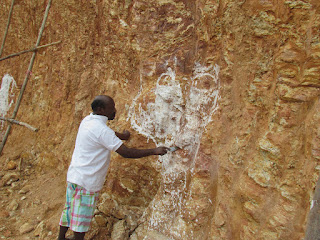 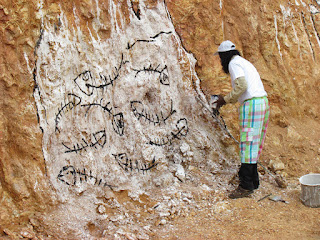 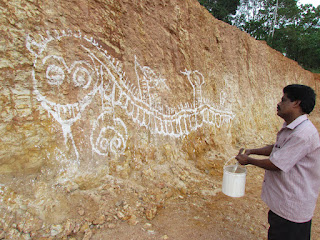 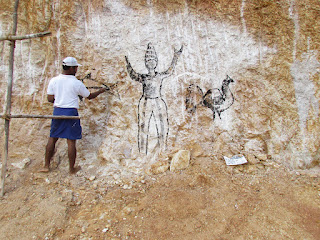 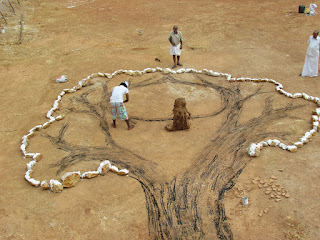 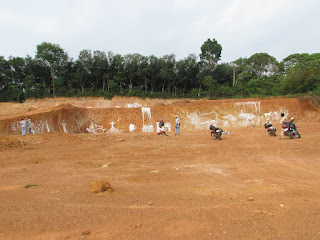 (artists at work and the outcome)

‘A Transparent Pact’ is a pact with the earth and nature. Mathai assures, through his humble effort that he is going to be there to voice against the earth mafia. He wants to tell his own people that if they are not cautious they are going to be doomed forever. “We should protect our local cultures, agriculture, economy and ways of living in order to go global. Being global does not mean mindless intake of anything foreign and celebration of the same. Being local is being global. Our future lies in environmental protection,” says Mathai.

this is one interesting ..let give water to some tree today..

It was an unforgettable experience..