Right to Use Public Road and Hauz Khas Village 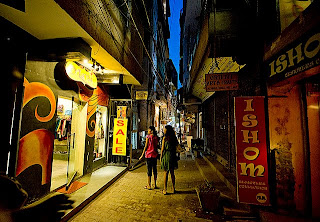 Within Hauz Khas village there is another village; the village of the villagers. They do not wear designer wears. Nor do they impose their presence on the visitors. But they are the people who really decide who to come inside their territory and who to go out. They are like leaves of lotus. They are not affected by the foreign presence there. They live a hugely rich life in an unseen inner layer of the village.

Vehicular access is restricted here. There is a cross bar at the entrance, operated by a private security man. When people try to drive in, he lowers the bar by pulling a long piece of rope. This is a private arrangement. The village owners do not want too many vehicles to come in and choke the roads. More importantly, they don’t want to lose parking space for their own vehicles.

At times the man who pulls the thread refuses to raise the bar even for the pedestrians. He asks them to move towards left or right and squeeze themselves through a narrow passage between an electric pole and a dirty wall. He is there to control the entry of motor vehicles. He does not have any right to stop people’s movement. But he is armed with muscle power of his employers; the village elders and the pradhaan (a sort of president of the residents’ welfare association).

Private security people doing such odd jobs like sitting on a pavement and lower or raise a cross bar generally come from the most economically weak section of the society. They lack self-confidence and this job as a security personal is something that boosts their confidence. They earn their respect by stopping people.


Problem is, as a person I don’t like to be stopped in the places where I know more than hundred per cent that the entry is free and one has all the right to walk in free. Also I don’t like to take side entries when the main road is open for all. In short I don’t like short cuts in my life. Above all, I don’t like to be called from behind once I have entered a place. May be most of the people are like me.

The other day I walked into Hauz Khas village where I have an office. The man who pulls the cross bar was holding it low and was showing his authority to some hapless driver whose ‘mem sahib’ was ringing him up to fetch her from inside the village. I asked him to raise the bar so that I could walk in. He refused to do so. I forcibly raised it and walked in.

He was screaming at me from behind. He said, ‘Bada aaya hai angrez ban ke’ (He has come here as if he were a foreigner).

I turned back, walked up to him and asked him to repeat what he just said. He kept quite. Then he told me that I should have used the narrow entry on the side. And his voice was full of arrogance; I knew that the arrogance was the reflection of his masters’ power. I told him that I was not supposed to use the side way and it was my right to walk in through the main road.

Even after many days that particular expression of that security man was ringing in my mind. Like an irremovable stain those words were stuck in my memory.

He was telling me I had gone their like a foreigner. It meant a few things: one, he knew that the patrons of Hauz Khas village were basically foreigners and an Indian was just an intruder there. Two, he did not like the foreigners at all, their haughty postures and skimpy clothes, so anybody who threw an attitude was an ‘angrez’ for him. Three, he had observed that those Indians who visited the village were either the people who belonged to the creamy layer or the hopeless lovers in Delhi who did not get a cosy place elsewhere to neck and peck.

And he must be hating both the creamy layer people and the lovers; both the parties challenged him with their extravagant approach. That’s why Aravind Adiga in his novel, White Tiger spoke about the spitting habit of the working class people in Delhi. They spit a lot because they hate their masters like anything, says Adiga. I have seen drivers after politely closing the door, showing the mid finger in air just to show their frustration.

In fact I was not showing him any arrogance. I was exercising my right to walk in a public road. Nobody has the right to stop me.

But I can see the danger. Several places in Delhi are becoming fortified and classified areas. It is not done by the government. It is by the so called ‘owners’ of properties there. In some places they make huge gates and cordon off the properties and even negate access to peddlers and vegetable vendors. There will be a day that you need to show your reason to enter in a place, which in fact belongs to anybody in India.

I remember those days when we walked through somebody’s land, played in somebody’s plot and ate from anybody’s kitchen.

We have become a sick society, a frightened society.
Posted by JohnyML at 12:53 PM

The writers comments are biased and one sided.there are 2 parking lots outside hauz khas village being run by 2 contractors , one on behalf of DDA & another on behalf of MCD.there is no space for parking of vehicles belonging to visitors inside the village , that is way visitors are asked to park their vehicles in the authorised parking provided by govt. agencies , this is also being done to avoid trafic jams & to avoid harresment to the visitors.the parking attendents are doing their duty for which they are paid.although they are poor , as humans they do deserve proper respect & the writer should not feel offended to park his car in the parking & pay parking charges.we should cooperate as the trafic management system in hauz khas village is doing fine considering the popularity of the place. Hauz khas village is a fantastic place to visit & shop.