My Political Activism Makes Me Happy, Why? 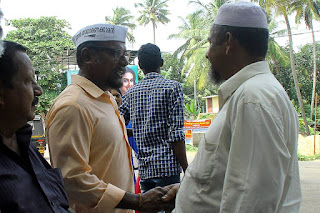 
‘April is the cruelest month, breeding/ Lilacs out of the dead land, mixing/Memory and desire, stirring/Dull roots with spring rain’, said T.S. Eliot at the outset of his path breaking poem, in fact mixing despair and hope in equal measures, making the reader experience the heat of the month while walking on the rope of desire, balancing completely on the open umbrella of memories. I too was walking on a tight rope precariously, shaking profusely with bouts of indecision, but at the same time regaining balance by holding on to the singular belief that redemption of a human being is possible. To be redeemed, one has to fall into the depths. But in my case I had not fallen into any depths. On the contrary I was to redeem myself from a shallow career choice that had taken me from one shallow spot to a series of others incessantly. I could have walked off but there were pressures of other months. March is not like April and February, obviously is not like March or April. So like an Okri child I was wading through the shallow waters of illusory gains, heavily day dreaming and getting entangled in the invisible threads of lethargy. I was acting activity and I was living lethargy. Dulling effect of lethargy on body was so disastrous that I saw the strong ramparts of my body caving in like dough mounds kneaded by a merciless machine of nothingness. Hence, after a period of dullness, I cannibalized the machine of nothingness into an auto-proteinating regime of rejuvenation, through which I found the rhythm of a regular being who does not ask himself to choose a rope rather than a road.

I have been into politics since childhood. Being the son of a political activist who had moved from one party to another (a couple of times only moving from red to tricolor), eagerly and desperately looking for a spotless platform for ideation activity, my fate too had been sealed very early as far as political activism was concerned. For a long time political reading for me was a supplement to my readings into culture and I had not taken any interest in data or enormity of corruption that had been taking a better share of our political lives. I was happy to be a closet radical while developing all those traits which would have erased the radical habits slowly but steadily. My re-entry into active political arena was as a political journalist in mid 1990s in Delhi. Interestingly, I was so naïve in those days that I could not even discern from one politician to another one. Every name rang the same tune in my mind and every face brought the same ugly reflections of a quintessential corrupt politician. But I have always been a quick learner but a slow employer of the lessons thus learnt. I remained a political journalist for almost ten years and I could say for sure that I was more existential amongst the political journalists and a politician amongst the existential artists. I was looking for a right combination and upon finding it an illusion which was entertained only in books, I decided to quit. 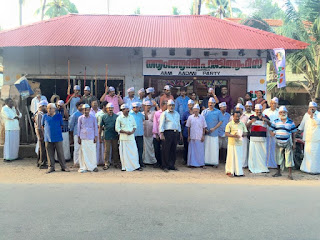 (with the AAP workers at Vakkom)

Quitting political journalism for a full time art career helped me in more than one way. First of all, amongst the politically naïve artists, I was a politically aware art critic. Secondly, the moment I shunned the career of being a political journalist, I became more curious about politics and became a keen learner of India’s political history. I should say, I read more political history than art history in the decade that followed though I never showed my political views in public and always kept a low profile when political issues came up. In the scene where I operated, which is the art scene, politics has always been a thing of gossip and self righteous opinion making, which did not go beyond a couple of phone calls. I also noticed that most of the artists, especially the ones who lived in big cities always curbed their political opinion in order to be on the right side of things. They apolitically handled everything that needed urgent political addressing. I should not say that there were no really politically aware artists. They were there but soon I found out that they too were standing on the crutches of party politics and were enjoying all those privileges that the party insiders on the top echelons would enjoy. It was disgusting. But my decision was to keep quiet on that front and look more at the aesthetical problems in art vis-à-vis sociology and economics.

Things changed for me when I witnessed the Jan Lok Pal bill protests in Delhi. Then came the infamous Nirbhaya case. I saw the political acumen of Arvind Kejriwal in launching a political party named Aam Aadmi Party. In December 2013, Kejriwal’s AAP came to power with the outside support of Congress in Delhi. The government did not last even two months. Kejriwal ejected himself out of the trap he was in. I was cynical in the beginning and it was when I started using my social networking site (facebook) for expressing my political ideas. Perhaps, I was the first one to ask Mr.Kejriwal to do away with the hallmark cap of an AAP worker once he became the Chief Minister of Delhi for the first time. My argument was that if he was an ordinary man and the CM of the ordinary man, he need not have distinguished himself from the millions of ordinary people who do not wear those caps. I do not know whether he saw it or not. But then, till he resigned, he was not seen with the cap. He wore it again when he contested again in Varanasi, this time against a mighty opponent, Narendra Modi. Kejriwal lost and Modi won. I was sympathetic to Kejriwal and was not so critical about Modi. I was of the opinion that Mr.Modi also needed his time to settle down and do things. But for many like me, the hope was misplaced. Modi started showing his true colors sooner than later. 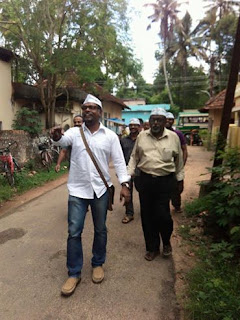 (With the AAP workers at Vakkom)

I intensified my campaign against Modi and his autocratic and theological regime through my facebook. In the meanwhile I saw how Mr.Kejriwal came to power in Delhi for the second time with an absolute majority by wresting 67 out of the 70 seats. I was happy to be the first writer who had written a book on Kejriwal (DC Books 2014). I thought, after Kejriwal’s resignation and his total obfuscation from the public space by the antagonistic dominant media, my book would not sell well. But today it seems to be out of print. Like any other ordinary citizen in this country who uses facebook, I also started posting my political views on both Kejriwal’s AAP and Modi’s BJP. For the last one year I have been more vocal on politics than the matters of art. It was a natural transition. I could not have done otherwise. The art scene was behaving like an individual castrated; due to the lack of political will, with no constituency of its own, the artists’ community was behaving like a defeated lot. Interestingly, many of the artists started going weak in the knees before power and political arrogance. Today, art is a lost cause in India. Our country does not need the so called political art; it needs art done by politically conscious artists. We need more artists who can vocalize the critical political positions within the larger communities. I could not see any coming up. It was then that I decided to move out of this lost scene and join a more focused and energetic scene; politics.

I could not have chosen any other party. In India, there is no other party which has taken me by force; which has attracted me and compelled me. I have been keeping my talks on for over a year with my village people and a few leading lights who were already working towards making the AAP unit in our village. I could have joined the Delhi AAP. I knew that I might have been forced to behave like a pushy politician in Delhi to grab the attention of the leaders and I would have become a political survivor than a political activist. Hence, I chose to join the party in a small village, where I could start my work from the Panchayat level, which in fact is a true reflection of the AAP’s manifesto. Today, I am an active party worker. I make public speeches, I visit people, I talk to people and keep no grudge against any individual from other parties. As an AAP worker I am not addressing the individuals; they are my village people. But I address the systems of corruption and nepotism. I question the dominant ideologies and the ways in which the political parties implement them into the lives of hapless followers. Our fight is double edged- We have to create awareness about the system amongst the people and at the same time fight corruption politically. 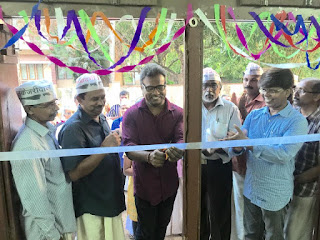 People mock us. People mock me. Both right on the ground and in the facebook, people come forward to mock my efforts. They think that it is a fancy; a passing phase. They think that nothing will happen to this party. They believe that we will lose interest and go. They think so because this party is a party with no power, economic or otherwise. This party does not have massive following in Kerala. But I have a dream, I have a dream to build the party from the grassroots. I have a dream to be an activist at the ground level. I address power and I address power with responsibility and free of corruption. It may be a distant dream but to me it looks very near. I believe that government and governance means ruling force and the opposition. Together they make a government. In our country, often opposition is neglected. Democracy has become a majoritarian autocracy. My political vision is an ant’s eye view of things. I see from the ground and strive to reach perfection of politics. This is what every AAP worker in Kerala aspires for, I believe. And we will turn the political scenario of Kerala around. My political work justifies my conscience and vice versa. It makes me happy.

Congratulations Sir!!The very first time i met you i could see the honesty in you, you are a very honest & straight forward person & that is what i liked a lot about you.I am confident that one day you will attain success in what you are striving for.All the very best & can i join your party?