When Nirbhaya and the Moga Girl Came to Vakkom 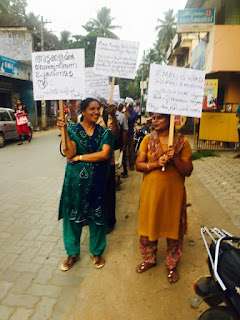 (AAP Workers protesting against the Moga incident at Vakkom)


On 29th April at Moga in Punjab, a girl was molested in a running bus in the presence of her mother and younger brother, by a group of hooligans belonging to a political outfit or having affiliations with the ruling party in Punjab. Both the girl and mother were thrown out of the running bus and the girl died instantly. This incident generated huge protests in Punjab. Finally, a truce was called between the father of the girl and the ruling party of Punjab. We are sure the case will be slowly pushed out of the public memory as the culprits were traveling in a bus owned by the Deputy Chief Minister of Punjab and his wife, a central minister. Above all the Deputy CM of Punjab is none other than the son of the Chief Minister of Punjab. It takes a Rohit Shetty or Shankar to cook up a story and put Ajay Devgan or Vikram or Vijay in the lead so that some kind of justice is delivered in such a case. Otherwise, in the real life, with this much power packed at on one side of the issue, the molested girl’s family is not going to get any justice. To top it up all, one of the ministers in the Punjab Assembly declared that it was the ‘fate’ of that girl. I think, those who carry an iota of dignity with them must have hung up their heads in shame on that day. I did. I could not even look at my own face in the mirror.

There is a stark and startling difference between the Moga incident in Punjab and the Nirbhaya incident in Delhi, almost three years back. On 16th December 2012, in a moving bus in Delhi, a girl, posthumously known to the world as Nirbhaya and today known as Jyoti Singh Pandey, was brutally assaulted by a group of revelers who actually worked in that bus. Nirbhaya died the death of a martyr. She brought in a great change in our society. While she was fighting for her life in Delhi and later in Singapore where she was sent for treatment by the Government of Delhi under the then Congress Chief Minister, Shiela Dixit, the Indian middle class woke up and came out into the streets and staged a moment of revolution, which shook the seats of power. The moment, its momentum and the resultant movement was so contagious that not a single incident in India since Independence had consolidated the Indian mass the way the Nirbhaya incident had done. It was not her religion, it was not her identity and it was not her social status that helped her in becoming the fulcrum of a social movement. It was something else. That something else was denied to the Moga girl. So the protests were confined within Punjab only. Initially, it showed some symptoms of becoming a national movement. But something failed the masses from within. What was that? 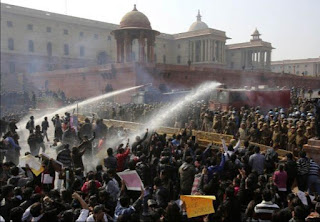 (People protesting at the Rajpath in Delhi against the Nirbhaya incident)

When Nirbhaya incident took place, India had already been doing a soul searching through the India Against Corruption movement, which later manifested in various demonstrations by Anna Hazare, Arvind Kejriwal, Kiran Bedi, Baba Ramdev, Swami Agnivesh, Medha Patkar, Sri Sri Ravi Shankar and so on. People were already fed up with the corrupt ruling classes. Nirbhaya was the last point where the patience of the masses snapped. They just wanted to tell the rulers of India that they did not want to tolerate the anti-human activities caused by the failing law and order system. People reacted, strongly, heavily and extraordinarily. Nirbhaya incident was one of the tipping points that helped the newly formed Aam Aadmi Party in getting 27 seats in the Delhi Assembly by the end of 2013. But there is something curious about the national proliferation of the Nirbhaya Sentiments and the lack of it in the case of the Moga girl.

Perhaps, the Aam Aadmi Party unit in Vakkom, a small village in Trivandrum District, is the only political outfit outside of Punjab that did a protest march against the infamous Moga incident. It was a humble but powerful way of registering our protest against the ruling class in Punjab as well as generally in India. We at the AAP unit here did a brainstorming regarding the possible action plans to protest and it was my idea to take out a protest march that highlighted the Freedom of Women and Equal Rights and Justice. I took up this issue for a couple of reasons. First of all I was the first curator in India who responded to the Nirbhaya incident through a well thought out art project. Titled R.A.P.E (Rare Acts of Political Engagement), this show featured twenty two young Indian women artists who very strongly responded to the Nirbhaya incident. The second thing was much more telling than aesthetically oriented. I found that while the whole of India erupted against the Nirbhaya Incident, very few people even bothered to speak about the Moga incident (I tried to speak to a few village folks but they responded to the incident as if it were a folk story of sort). I soon nailed the reason for this lack of interest even immediately after a huge discussion around the controversial documentary titled ‘India’s Daughter’ by Leslie Udwin. 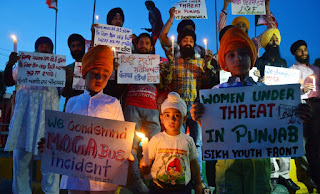 (Children in Punjab protesting against the Moga incident)

My finding was simple but shocking. People reacted sharply because the culprits came from economically, socially, culturally and politically deprived backgrounds. The molesters were underdogs who were looking for some fun. They belonged to some urban shanty in Delhi where people lived in subhuman conditions. The culprits were migrant poor therefore they were immediately seen as pests or malevolent creatures waiting to disturb the social harmony and peace. They were beasts from the urban jungle therefore they needed to be hunted down. The middle class felt exactly the same about these migrant poor men who were looking for some fun which ended up in the merciless raping and killing of an unsuspecting girl who had gone out for a movie with her friend. I am not pitching my argument on behalf of the urban poor who assaulted Nirbhaya and killed her; in fact I demand capital punishment for them, ironically exactly like the other members in the dominant middle class. But in the case of Moga incident, the culprits had a huge political cover. The culprits belonged to the ruling class/family and also they were working for the transport company owned by the Deputy Chief Minister and his wife, who is a central minister. Suddenly, the Indian middle class became absolutely silent on this. Are they afraid of the rich and powerful? Or do they think that when committed by the rich and powerful, a crime is a notch less than the actual crime? Do class affiliations and aspirations alter the perspective on crimes and social injustice? 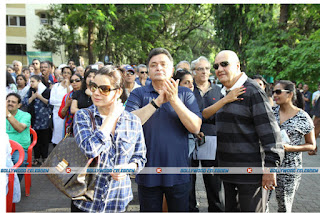 (Celebrities coming out to protest against poor hawkers in Mumbai)

In the case of the verdict that the actor Salman Khan recently received for the homicide caused by his callous driving almost twelve years back, and the kind of support that he gets today from his kith, kin, politicians, colleagues and the huge fan base, clearly shows that the middle class feels that the crime if committed by the rich and powerful is partly permissible. Or rather they would accept it for sometime till it festers within them and causes some kind of depression which they would express through their negative voting. Middle class and upper class are like that. Let us take a couple of incidents that took place in Mumbai recently. The BMC (Is it Brihan Mumbai Corporation or Bombay Municipal Corporation?) brought out an order letting the hawkers to use the pavements of the rich locations like Pali Hill and Malabar Hill. These are the places where a square feet of space costs around Rs.1,50,000/- (one to two lakhs rupees for a square feet of space). When the vendors were allowed to set their stalls there the film stars, musicians, celebrities and so on came out in the streets to protest against the corporation’s move. They said that the vendors will litter and congest the roads and pavements, which will collapse the peaceful ‘ecosystem’ of their lives. The rich people see it as an encroachment. They hate the poor vendors setting up their makeshift stalls there. They just do not want the poor in their vicinity. In Mumbai you can hear people doing breast beating to protect the Parsi colonies and Hindu colonies. But nobody talks about protecting the colonies of the common people. The MHDA colonies are crumbling. But nobody cares. The protest of the rich is against the migrant poor; not really for the environment. But these people, these celebrities themselves do not ask whether they really belong to Mumbai or not. How many of them are from Mumbai? They have all come from Punjab, UP, Bengal, Tamil Nadu, Bihar and so on. 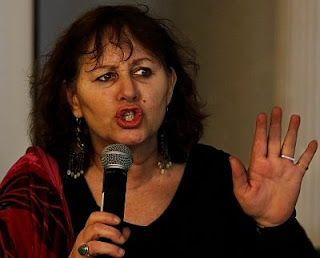 When we decided to take out a procession against the Moga incident and also for sensitizing the people of Vakkom about women’s rights, equal rights and justice, we knew that we would not get many women to participate in the procession. In such villages women are politically illiterate even if they are educated academically. They may have some political understanding but their opinion is always swayed either by their husbands or fathers or by those of the dominant groups that come to help them. When we came out in the streets with placards, only two women were there with us and both of them were the wives of two AAP workers. When we were walking along the streets, most of the people were curiously looking at us and some of them were at least jeering and mocking us. But when I thought of it, the lack of women in our company itself shows that the sensitization is not needed to them, but it should be directed at the men folk in the village. I expressed my views in the party gathering at the office and they accepted it. I believe that women need to know about their rights. They need to identify their power embedded in them. They need to unlearn the lessons of patriarchy which is the guiding for them. They need to ask questions. And to make a conducive atmosphere for them to do all these, the men folk should change their attitude. They should get their women out of the kitchens. They should feel the need for them to have opinion in the public life. I could see the fear in the eyes of the men here. I am sure that they would change one day. I am sure one day the women would come out express themselves. Then this village, along with many other villages will change their course and complexion.
Posted by JohnyML at 4:27 PM