Denuded Self of Radhika Vaz: Unladylike 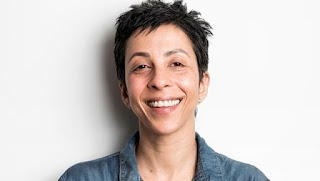 
Irreverence is the word that comes to my mind when I think of Radhika Vaz, the internationally acclaimed feminist stand-up comedian. Her autobiography, ‘Unladylike’ underlines the word, again and again. A girl who fears her turning to a man one day by dropping those ‘balls’ hidden between her legs, slowly grows into a woman, that too very assertive about her own personality, rules no bar. Being Radhika Vaz is being ‘freedom’ itself. A feminist could be fiercely outspoken, challenge the male norms and yet she could be loving, caring and deeply emotional. ‘Unladylike’ has it all; here is a young woman in pursuit of love, crossing continents to win her boyfriend who ironically has not given her any assurance of marriage. She wins not only as a woman in love but also as a woman in complete freedom. In her words, she could convince her Jat Mother-in-law of her wifely credentials or she could convince her MIL to pretend so.

My life being a stand-up comedy of sort, I have not taken much interest in stand-up comedians though I have keenly followed several of them and their performances. Eddy Murphy has been my all-time favorite followed by Chris Tucker and Martin Lawrence. Back home Raju Srivastava had done enough to tickle me by turning the rural innocence into sharpened socio-political and cultural criticism. Johnny Lever and Sunil Pal have done their bit to attract me. Reality Television has brought several of such Stand-Up comedians though Kapil Sharma, Cyrus Brocha, Vir Das and people of their ilk have hogged all the lime light. Back home I was grown up looking at Stand-Up comedians, who later became prominent film actors, paving way for many to follow their suit. Kerala is still a breeding ground for comedians (not strictly in the ‘stand-up’ sense) for the simple reason that the butts of their comedies and lampooning  just do not get offended by it, while rest of India reels under the pressure of hurting sentiments via comedy. Sedition could land you in jail so is comedy. India has become a land of holy cows. 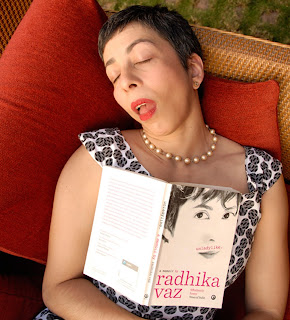 (Radhika Vaz with her book Unladylike)

Radhika Vaz does not mind calling herself a cow quite unholy. She could strip herself into nothing and assume the status of early nuns who had accepted sky as their clad. Vaz, in her popular solo performance, ‘What the F**k I should Wear?’ questions the dominant version of the world, which is scripted by the male chauvinists and speaks of her sagging body and the tension that each woman in the world takes on her shoulders in the morning in order to choose the right dress to look ‘sexy’. If one goes in that rate, according to Vaz, sky is the best wrap around for a woman, which would liberate her from all the demands. In the Youtube versions one could see the body of Vaz blurred in the key areas to keep the ‘modesty’ of the audience and make it ‘good’ for public viewing. Vaz makes a counter script to the male world and demolishes it like a one woman army. In her irreverent best, Vaz turns her acerbic witticism against the consenting women folk in India who celebrate Karva Chaut and does not mind calling them ‘Karva Choots’.

May be the Vaz Speak is not loud enough or rather the blasphemous utterances are done in the elite clubs and ticketed programs where the cultural police do not take a peek. Or rather Vaz speak is in English that makes the expletives that she profusely uses in her performances neutralized. Culture is affected adversely when it is uttered in the language of the roots. Vaz is a dare devil and her never say die and also her ability to show the mid fingers to both the male and female audience makes her exceptional in her critique. Vaz stands up in comedy, an art form which has gone down in the gutters using unimaginative double meanings to eke out laughter from the dominant male audience and reclaims it using the abuse directly at the face with no frills added. While the male comedians always have to resort to double meanings, Vaz takes up the liberty and responsibility to use ‘you-know-what-I-mean’ directly; in other words, while she calls a spade a spade she calls a dick a dick and a cunt a cunt. 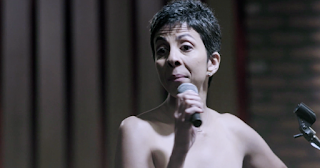 ‘Unladylike’ is a piece of autobiographical writing which positions the author in the mainstream and in the fringes alike. As Vaz is a successful Stand-Up comedian and performance artist who works internationally and speaks in English language, she automatically belongs to the mainstream, but when we understand that she writes from the position of a woman who seeks her liberation not only from the social systems but also from the linguistic system, she becomes a voice from the fringes. Interestingly, Vaz does not suffer from either position. She with her nose and mid-finger up at the reader/audience drills into them like an augur sharp with her sharp wit. When she speaks about her formative years in different countries and identifies her non-belongingness due to the uprooted-ness of her parents, we understand the throes of a young girl looking for an anchor. When she narrates how she heard her vagina farting for the first time in a silent library, when she opens her heart how she had craved to see an ‘X rated’ film with a real penis in action and so on we are pushed into an arena which we know exist but do not wish to acknowledge.

Vaz gives us an acid wash with her words. Each chapter shocks us to a new revelation; the inner recesses of a young girl who seeks approval amongst the peer groups. She wants to show off but her bounties are not so rich. She envies the booty of her classmates and wishes to have it like them. She pops socks inside her shirt so that she could pretend she has breasts, which she calls ‘chesticles’. Vaz desperately wants to let the other girls know that she too has got chums (menstruation). She displays a borrowed (begged and stolen as well) packet of sanitary napkins so that others could get the message, but only to be admonished by the matrons in the hostel. The second part of the book tells us how she reached the US of A and how she grew there as a professional in the advertising agency then into a Stand Up comedian. This book is a wonderful read. And the best sentence in this book is about Vaz getting a US visa from the US Consulate in Chennai. It runs like this: “Pick up your passport at 3 pm. This, as we all know, was code for ‘you can enter America’. I thanked her three times before backing away from the counter like a supplicant in a royal court whose execution had been stayed.” Go grab your copy.
Posted by JohnyML at 12:53 PM