The Danger in Unsigned Art Reviews in Newspapers 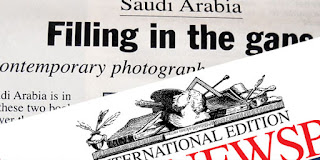 (Review- For illustrative purpose only)


This article does not intent to hurt anybody; any journalist or any artist. Today morning, in the newspaper, Hindustan Times I happened to read a small report on an exhibition that is currently on in Delhi. It speaks of an artist working from Dharamsala, a spiritual retreat in North India where the Tibetan government in exile is headquartered. This unsigned article had a curious title which in fact attracted me to it. It read, ‘Artworks Explore Link between Creativity and Meditation’. As an art critic, I am a bit uncomfortable with the word ‘spiritual’ when it is loosely applied on the kind of works of art, which either has a Buddha head or purely abstract. But this title sounded a bit scientific and the assertion that the said works of art ‘explore the link between creativity and meditation’ made me think that reading it would help me to understand the ‘link’ (which I have been missing for so long) between creativity and meditation. Let me tell you, the reading left me disappointed for it was the usual stuff; artist is spiritually inclined and he paints spiritual subjects. Period.

I could have left the article there but two things struck me while reading it; the writer/reporter’s blind faith in the artist who speaks as the ‘author’ of these ‘spiritual’ works and the deliberation that the writer/reporter has taken to keep his/her name obscure. It goes by ‘HT Correspondent’. As I used to be an insider I know that this kind of a byline means either the writer is a cub reporter or the report itself does not have any fresh or authentic views which make the reader curious about the identity of the reporter/reviewer. Hence, this report/review appeared more or less as a PR exercise or maximum a result of the page editor who looks for a filler in the page stipulated for (here in this case) South Delhi. The gallery where the show is on is located in South Delhi and perhaps that is the only justification that I find the relevance of this story. But the danger is whether the reporter’s name is known or not people have a tendency to believe in what the newspapers generally say. So layman would definitely think that this artist has found out the ‘link’ between creativity and meditation. False. 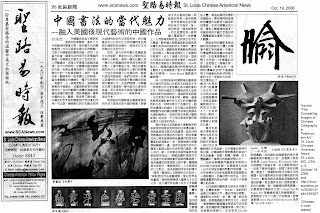 (Review 2 - For illustration purpose only)

Personally speaking, I do not have any problem with any artists who claim that their works of art come from deep meditation or an intense sense of spirituality. I know for sure that reading a few self-help books would not make you a professional trainer or reading a few spiritual discourses (whether it is of Osho or Dalailama or Jiddu Krishnamurthy or Sadguru or anyone like that) would not make one a spiritual guru. A person who has understood the link between creativity and meditation would never be able to say so because once that link is established the very life would become a deep meditation where painting or sculpting or anything of those so called creative activity ceases to exist. If you look from a different perspective, if you are creative and provided you are making a thing or conjuring up something with your mind and execute it through your hands then without this preamble of spiritualism and meditation, it is a deep meditative state. There is no link; because it is. If you are creative, in the very act of creation, you are meditative. But you could be meditative and be less creative where you would remain meditative but not creative. So the choice is left with you; Do you want to become creative therefore meditative or meditative and believe that you are creative too. I prefer the earlier one.

Those people say that they are very meditative and their art is linked to their meditation, are actually doing some self-deception. The state of mind in which the artist says that he/she is meditative and spiritual therefore the creativity that they have springs from that particular state of mind is a way of defining their creativity and seeking legitimacy for that. The fact is this that when you are creative, you could be nothing but meditative. You may be making a lot of noise; still you are meditative. You may be jumping around; still you are meditative. You may be sitting in the middle of the market; still you are meditative. You could be all in chaos and create something which could look quasi-spiritual or quasi-mythological and could call it meditative; still it would remain as a result of your confusion. So if someone claims that he/she has found out the link between creativity and meditation, it is all humbug. You cannot find out creativity in meditation. If you are creative, that is mediation. There could be a meditative state which is utterly inert and static, which blocks the nerve endings of creativity and make the whole being stand still or throb with the music of the universe. But it is not creativity. It is just finding rhythm with the universe. Great sages have done that. Once they have achieved that state of mind, they could hear what others could not (sruti) and they could remember what others could not (smruti). This is not creativity. It is just becoming a medium of the collective knowledge.

(Review- for illustration purpose only)

Therefore, the article that tells me about an artist who has read some spiritual literature, done fairly good yoga practice and has lived far away from the maddening crowd, and if the article claims that he has found the ‘link between creativity and meditation’ it is a false claim. It is as good as saying a quack had found out the complicated scientific truths about neuroscience. The jargon which is used without responsibility like in this press report, even barring the name of the writer, the fourth estate does a great disservice to the culture in general. The people who read and believe in it would perhaps tomorrow paint some Buddha head and some abstract stuff and say that they too have found the fresh springs of spirituality, meditation and creativity. It can never happen. The page fillers in this sense could kill the beautiful concepts of Indian art. When a famous newspaper like Hindustan Times publishes something like this, they could adopt a policy to say that ‘it is a promotional article’ or ‘the newspaper does not believe in the claims the artist has made. It is purely his personal views.’ Such disclaimers would help the reader to discern the good from the bad. The original from the fake. Otherwise, tomorrow the same jargon would be used for Subodh Gupta and Nikhil Chopra for they too explore their kind of spiritualism in their works. But in my view if they are doing something good, then definitely they are in a meditative mood. If any artist produces junk and it repels people both the initiated and the uninitiated, then be sure that the artist was just managing his/her art or just faking a spiritual orgasm.
Posted by JohnyML at 7:00 PM