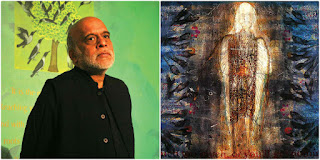 
The road leading to the address C-221 Sarvodaya Enclave, New Delhi is tree lined and spacious except for the infamous smog of Delhi and the address houses the Threshold Gallery where V.Ramesh, the Vizag based artist is currently having a solo show. For a moment one wonders whether he is inside the gallery or a drawing room of sorts, minimal yet furnished with certain vintage furniture. On a chair that gives the impression that the artist was just around here a while ago one sees a book half read and the title reads ‘Bento’s Notebook’ by John Berger. The lower table on the one side has a portrait of Ramana Maharshi, the artist’s soul guru and a few brushes and a small drawing of Annamalai (Arunachala), the hill by a student whose gift it is to the artist at some point and a light carnatic music wafts in the air from an invisible source. Close to the pillar there is a cupboard full with a mirror and a framed poem and a few books. You just glance at the mirror and you see yourself; did you ask ‘who am I?’ completing the third tip of the triangle there is an easy chair with a pillow which the artist uses in his studio, a meditative couch with an invisible shrink on the side, yes Ramana, the healer. The large wall that constitutes the base of the triangle has a huge painting with a portrait of the artist relaxing in the same chair while the world goes on with its hurried activities. The artist is in no hurry; he is like the self that watches the ‘I’, the world of senses and what remains in the painting is a vast area of drips and dashes, the marks that time has created taking the hands of the artist once in a while. 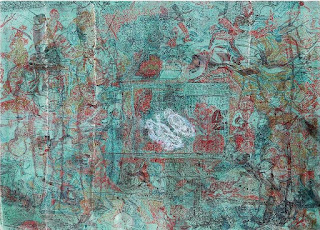 The solo of V.Ramesh does not have a title; perhaps a title for something so subtle cannot be so contemporary or too traditional. It should be ‘athukkum mele’, beyond that and what is there all that beyond- the nameless, the ‘it’ with no qualities, no form, no beginning and no end. The advaita philosophers say that the pursuit of art in itself is a distraction from the realization of god/self. Art is an obstacle; but at the same time the advaita philosophy adds that one could follow bhakti (devotion), karma (action), raja (enquiry and mediation) and njana (knowledge) yogas to achieve the godhead. Art is a mixture of bhakti yoga and njana yoga expressed through raja and karma yogas. Hence, art is permissible in the pursuit of self provided the artist does not become mundane like a sufferer of worldly worries and vices. V.Ramesh has been doing his art as a way of self realization and his thematic repertoire is often limited to the characters from Bhakti literature as well as epics, scenes around Thiruvannamali and Ramana Maharshi and some animals and fruits. It is pertinent to speak about the animal imagery and the fruit (banana/plantain) imagery in his works. 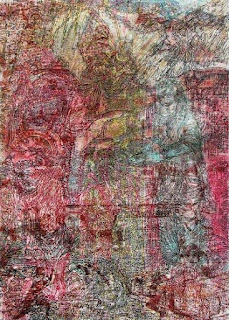 As an art critic, when Ramesh presented the fruit series for the first time I was very sceptical about the work. I could not locate the clinical precision of its execution and the digital imaging that could have been the base of it. However, when I see the watercolours in the present body of works, I could deduce a new meaning by reworking on my previous position. The banana bunch in its original stem appears here as a body, a rib cage or a torso and the artist calls it ‘offering’. The body is an offering; the fruit is the inside and the body just a peel. Pazham, the fruit in Tamil literature stands for the essence of wisdom and knowledge and Ramesh knowing this, uses banana as his metaphor to emphasis the body-soul relationship. Also he conceives one of his paintings, ‘Fall of a Warrior’ as a fallen plantain tree; there is the stillness of a dead body in the stem, there is the layering of the sheaths, the broken and tattered leaves become the devastated body of the warrior, who here is none other than Dronacharya, who was felled by lies in the battle field of Kurukshetra. Ashwathama hata kunjara, the elephant named Ashwathama is killed. But the Pandavas did not say the word elephant loudly and even if they said, Lord Krishna, the master of all yoga had blown his conch submerging the distinct words. Drona kept his bow down and alighted from the chariot as he heard his son, Ashwathama was killed. Arjuna does the final act. And Ramesh details this narrative in a fallen banana tree, which I think is quite poignant and telling. 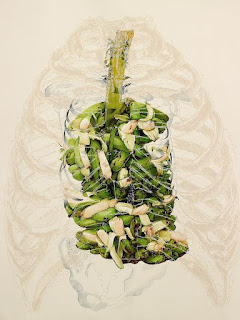 In Thiruvannamalai if you go right next to the old prayer hall you would see two small tombs one for Lakshmi, the cow and one for a crow that used to come and eat with Ramana Maharshi. Those who come to the Ashram soon shift themselves from the homocentric world to the creature centric world. Ramana’s teachings are not for human beings’ welfare alone; it is for all. Ramesh has learnt his lessons correctly. There is a dog that comes repeatedly in his watercolours and he is seen against the backdrop of the Arunachala hills (Annamalai) and the Annamalai temple. He is an insignificant dog but so significant in the Indian philosophy. He is the one who walked all the way to heaven when Yuthishtira crossed the threshold of heaven. He is the one who came with the Chandala, Lord Shiva in disguise who had come to subdue the ego of Sankaracharya. If Ramana could see a cow and a crow alike and see no difference between them and the human beings, what is the difference between a highly placed human being and a dog? In his poetic watercolours Ramesh brings this aspect like a chant, but never trying to teach anyone anything because the wise ones see no point in teaching because the ones who want to learn, learn it from silence and silent gestures; or maximum from the stories. 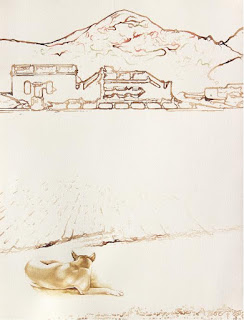 That’s how Ramesh takes the Ramayana paintings, three major works that hold the show together. Somewhere he happened to see an old Ramayana book with wood cut illustrations. Suddenly he remembered the Ramayana narrations done by his grandmother when he was a child. That seemed to a Proustian moment for the artist. Though he had treated Ramayana situations earlier, he attempted once again the Ramayana paintings. There are three distinct paintings; one titled ‘Epiphany’, the deliverance of Ahalya, two, Savdhan, the moment before the abduction of Sita from the hermitage and three ‘the Genesis’, the episode that leads to the making of Ramayana. The source of all these three works are the existing illustrations but Ramesh takes them as a starting point to make layers of his own stylized pixels and over layers it with multiple narratives that precede and succeed the intended and given episode. The choice of Ahalya scene seems to be accidental but Ahalya is the most debated woman character in Ramayana after Sita and many a feminist writer has reworked the stories of both the female protagonists in their own perspectives. However, Ramesh does not seem to attempt any such alternative readings as his attention is given more in the juxtaposition of narratives and the near submerging of decipherable stories in the primordial chaos of the visual universe. One need to go back further into the space to see the works properly and suddenly one sees himself right in the middle of the triangle that I have mentioned earlier; the artist’s own space. That means, one could read the works primarily and eventually from the artist’s space; it is the artist’s narrative almost doing away with all the possibilities of extracting subtexts. Self has only one text; no subtexts and if at all they are there, they are all illusions. 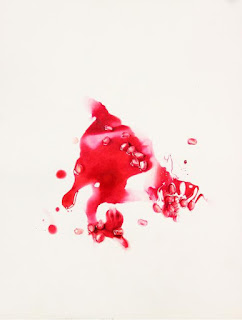 In Savdhan (attention, caution, alertness etc) we see Ravana coming as a mendicant and asking for alms from a lonely Sita and she is about to cross the line, therefore the warning, Savdhan. However, Ramesh over layers it with the succeeding narratives of Jatayu fighting Ravana and later informing the news of abduction to the distressed Ram and Laxman in order to make the work an old volume that only the devoted could open with reverence and read. Same is the case with the work, Genesis, the origin of Ramayana where sage Valmiki sees a hunter shooting down one of the love birds. ‘Ma Nishada’, ‘Oh Forest dweller, don’t’ is the opening of Ramayana; it is against all kinds of killing; perhaps a message for the contemporary world where not only living beings are killed for establishing some other beings’ supremacy but also the very environment where everything survives is annihilated for commercial gains. The works are to be seen in silence and in reverence. It is not just about Ramesh’ works but all the works of art in the world should be seen with reverence. If a work of art is not for meditating further about it or about the maker or the seer himself, what is the use of art? For social change? You must be making up things. A society can change by means of art only when the people who see a work of art and remain in that sublime state of being for a prolonged time and perpetuate that state of awareness into all what they do further in life. Are we ready yet for such art and such contemplation?
Posted by JohnyML at 9:02 PM