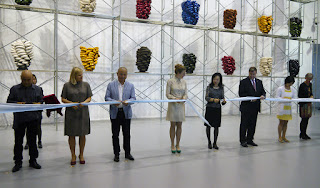 (This picture is for representational purpose only. Image source net)


Art shows, especially the ones organized either by the artists themselves or by the big institutions are very important events for them and all the well wishers around them. I am not discounting the gallery exhibitions that too are formally inaugurated. These days, galleries in the metro cities like Mumbai and Delhi do the common openings so that the people could travel from suburbs and other places one time and catch up with most of the shows. Such shows are ‘opened’ at a particular time, mostly without any ceremonies that would mark the occasion. Perhaps, the ‘inauguration’ done in such spaces is often by people who enters the gallery first or pick up the beer or wine glass first. But for an individual artist who books/reserves a gallery space with his hard earned money and puts in all efforts to mount the show, print a brochure, run around to invite friends and fellow as well as senior artists and the press, it is a very important occasion. For individual artists or artists’ groups such inaugural moments are very important and they preserve those moments very clearly not only in their social media pages but also in their memories forever.

As a senior person in the art scene I too get invitations to attend the inauguration of exhibitions and at times I am asked to inaugurate the show as well. I agree to inaugurate certain shows because the artists consider me as an ‘important’ person (though I do not consider myself so important and let me assure you that it is not false modesty for I am okay with people neglecting me completely when I walk into a gallery on an inaugural day or any other lean day following the inauguration) and definitely not a ‘celebrity’. If somebody mentions the word celebrity in their over enthusiasm to impress me by making me feel about my own celebrity status in their eyes, I politely dissuade them from using that term for I have clear notions about what makes a celebrity and what makes someone important in a given field of profession. So many people in the art scene consider themselves as celebrities for the simple reason that their photographs quite regularly in the newspapers, which are further proliferated via social media pages. But I cannot blame them for having that feeling because for the general public, the aam janta, someone who appears in the media regularly should be a celebrity backed up either by culture or habitual criminality (political and business people have their own reasons to appear in the media regularly). 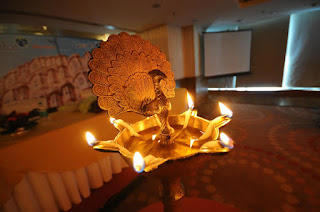 I learnt the distinction between a celebrity and an important person when I was studying in London. One day I saw my lady professor walking into the tube carrying her cycle and standing near the space marked for the bicycles in the train compartment. She looked extraordinarily ordinary and had it been somebody else I wouldn’t have even noticed her. This incident woke me up to the fact that each time I travelled in the public transport, the person standing or sitting next to me could be a scientist, a poet, an artist, a professor or a singer. They were all important in their own fields but they were not celebrities. Had they been celebrities they would not have been travelling in the public transport was my simple logic. Many years later I saw a picture of the former British Prime Minister, David Cameron while in that position travelling by tube, leaning against a bar and reading newspaper. I did not know whether it was a photoshopped picture or an actual one but that image had impressed me. But in India, our celebrities do not dare to be out in the public for the unruly behaviour of the public. Celebrities too are human beings and they do not like to be pinched and punched.

That means important people could be normal people and are recognized as important ones in a common group. There is a tribal identification there. But celebrities are famous therefore easily recognized but hardly seen out in the public. That’s why most of the celebrities, even if they are so familiar to the people, remain aloof and mysterious, making people read even the trivial-est of gossips about them. I always think of celebrities as locomotives, the steam engines of the yester years. Train spotting was a favourite pastime for many people during the early part of the last century and it continues to be so in certain parts of the world. Steam engines with their grandeur and power had been visible to people and yet unapproachable. Hence looking at those round-faced ‘rogues’ with distinct names, was a thing of amusement and pleasure. Celebrities are also like that. Unfortunately, our art has a limited constitution and the celebrities from this field are not easily recognized once out in the streets. May be artists know this fact and that’s why most of the ‘inaugurations’ feature some celebrity as a chief guest, apart from a couple of senior artists. 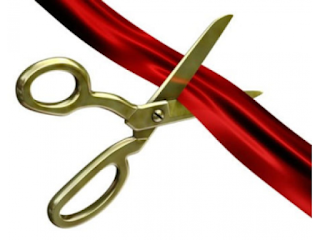 Inviting celebrities, especially budding film stars who need more eyeballs on them even if they are from the impoverished artists, film stars who are currently jobless who also need attention from the public, film stars who obliges some big shot who has some distant connection with this artist whose exhibition is to be inaugurated, is a great passion for the artists who want their inaugurations to be remembered forever. By doing this they do not know what injustice they are doing unto themselves. In my opinion, no celebrity should be invited or allowed to do any kind of art inaugurations.  I am not against celebrities as such but the fact is that their presence in an opening of a show would mar not only that evening but also the artist, his/her grace, the dignity of the works displayed as well as the people who have been invited to attend the function. Our society is generally dumb and it thinks that whatever the celebrities say are ultimate statements about art or culture. The dumb statements made by the celebrities often put them into trouble though.

An exhibition is an artist’s right and a privilege and he/she should not pawn that opportunity for some small time titillation of getting photographed with some dumb actor or actress or politician. Most of the well meaning people because of the human frailties soon swoon the moment they see some celebrities at a hand’s length. I had once seen two good old ladies in a bus that ferried people from the waiting lobby to the aircraft bay. Actor Anil Kapoor was in the same bus and these two ladies who looked like tight lipped Victorians changed into two she-monkeys jumping for his attention mentioning the actor’s name loudly in their conversation, sending him covert glances and all this while the dignified actor stood straight hiding his gaze behind the stylish shades and even twitching any of his facial muscles positively fearing that the old ladies would get encouraged. So that’s what happens when a celebrity comes to inaugurate an exhibition. He/she would make polite statements and pose for photographs (and the pathetic thing is that most of the actors physically tall and the artist with his vertically challenged physique literally get dwarfed in all the photographs making that glorious day in his life a shame forever) and just go. With him/her goes the public leaving the artist and his unattended works there in the gallery, with only a few die hard friends for winding up the day before they go for some cheap dinner at the back lanes. 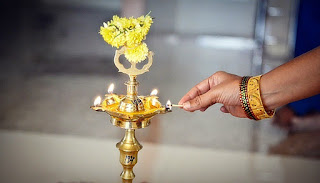 Now, it is the time for me to tell you who should you invite if at all if you want to have a formal inauguration of your exhibition. The best way is to inaugurate yourself and let other friends of yours to light the rest of the wicks. If you are married you could make your wife to inaugurate for she is the first casualty of your aesthetics and she should be acknowledged publicly. The best person who could inaugurate your show is your parents who willed you to this earth. If your father is dead, let your widowed mother inaugurate the show. If not, invite that artist who when you were in your village still confused about your future in art, goaded and guided you to a big city college and supported you in thick and thin. He may not be English speaking and glamorous but you owe your art to him. Do not go for these unworthy celebrities. Art should be venerated by those people who worship in the temple of arts, not the casual tourist who visits those temples only he/she is invited. Art opening should be attended by people from your villages and do not care whether your fellow artists appreciate your works or not. Take the canteen boy who brings you tea in the gallery and show him each painting and gift him a drawing when you wind up your show. Do such acts of simplicity, your art will grow. But do not invite a celebrity to your art opening.
Posted by JohnyML at 8:05 PM

Best advice to any Artist, whether junior or senior Artist. Mother, wife, and even your own daughter or son.who are also the ' casuality of...'