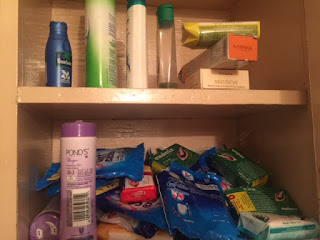 In many an article, I have expressed my displeasure for accumulating things with the complete belief that I am devoid of that sin of hoarding. I see hoarding as a middleclass thing, the remnant of its lower middle class status, the inability to shed the last trace of its deprivations and parsimony. Right from banking and co-operative movements to lottery, piggy bank to art collections, accumulating has many dimensions. The Rich amass wealth and it becomes an obsession, a time pass. The poor want to do the same and it becomes an occupation. In between, both the groups accumulate things. The rich ones collect souvenirs, artefacts, works of art, perfumes, liquors, silks, stones, precious metals, cruise boats, private jets, cars, pets and so on. The poor ones collect bus tickets, used refills, old clothes, milk covers, polythene bags, egg shells and what not. While the former collects things for enjoyment, the latter collects it for a possible future use (which perhaps never comes). Children collect matchbox stickers, superhero cards, toys, candy foils and so on (I am talking from a very old experience). Lovers collect lovers, broken bangles, kerchiefs, dreams, tears, sighs and at times hair. Brooding ones collect stamps, coins and curious information. Smart ones just collect information so that they could keep their neck up in any situation.

Freud calls it anal retention. Any collector has this habit of holding the shit back up in the posterior. They just do not want to leave it. Freud was perhaps utterly unromantic. Walter Benjamin did not think so. For him collecting was a sort of memorialisation of life. It has a lot to do with history. Benjamin is acceptable because he does not reek with the smell of shit. Freud is down to earth and calls a shit, a shit. People hoard things because there are a lot of memories attached to each of the collected items. I am talking about a conscious collector; not the ones who invest in a work of art or the mothers religiously collecting milk covers. Both of them never use it. The art collector who invests in art never enjoys what he has just picked up from the galleries or studios. The mothers would never put the milk covers back into use. At times they wonder why they do it. You can show off a Husain on your wall even if it is a bad print. But you cannot flaunt your milk covers or egg shells. The best policy is to throw what you do not need after use. Do not collect. 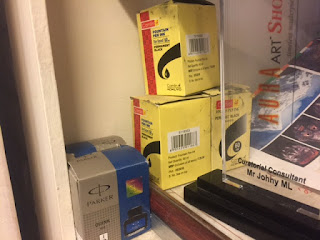 But people do not do it because they attach a lot of memory to the things that they collect. When they look at something, they just remember from where they have got it and who was with them and what had prompted the collecting of it. It is beautiful to remember things past; some memories are painful but far removed from the time of happening, even the painful memories lose their pain part in retrospection. That’s called philosophical distance/distancing. The mad man on the road who collects rubbish and ties them to his body must be carrying a lot of memory with him. The memory of scavenging. But who said it is scavenging? For him, he must be digging for gold or exploring in to the annals of history which we fail to see in the rubbish and rubble. What else do historians do in the research centres and in their private studies. They look like these mad men but in good clothes with a lot of invisible burden. I like both the parties. They generate a lot of interest. 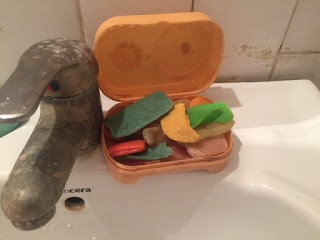 Except books I do not hoard anything. I collect books not for the sake of collecting but for reading. People have offered me books which I have politely declined at times as those many not be of my interest. Those people who do the spring cleaning at times think of giving me some books upon hearing that I collect books. But when they come and see the collection I have they shy away without talking about their charity offering again. I am not a dump yard of books. However, I salivate when I hear about books. Even if you have had enough food to quench your hunger when you are given some delicious dessert you would think of stuffing your mouth again. That’s the case with me as far as books are concerned. But in the case of other things, be it clothes or anything else, I have been thinking of myself as a person devoid of that hoarding vice. Recently I was cursorily going through the stuff and I found out the following. 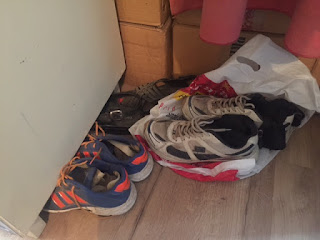 In a corner of my bed room I found three pairs of foot wears. Nothing great about it because I have heard of people having quite a good number of shoes, not just Imelda Marcos of Philippines and Jayalalita of Tamil Nadu; my friends, artists, who have shelves full of foot wear. I saw these three pairs and was shocked. One pair I had never worn which is now filled with dust. One pair of walking shoes is in a dilapidated state. Another pair of walking shoes lies there waiting for me to push my feet into it next time. That pair of shoes has not informed of my techniques of doing my morning walks or evening walks without foot wear. Then I came across these small little pouches and covers of washing powder and bathing soaps inside the bathroom cupboard, reminding me the number of times I have washed my clothes. I do not have a washing machine. I dance on wet clothes for fifteen minutes and I get my exercise and the clothes get their adequate thrashing. Then I look at a small soap box which is full of soap pieces. I am person who uses soap till they become transparent or invisible or even thinner than the paper. I wonder why I did not throw them out. Then I look at these empty ink bottles which are slowly growing in a silent corner. Why am I not throwing them out? Is it because I am middle class or I simply forget to throw them. What is holding me back from throwing them? I need to really throw them out.