Note Book of Ordinary Things 2: Children and Light in the Alleys 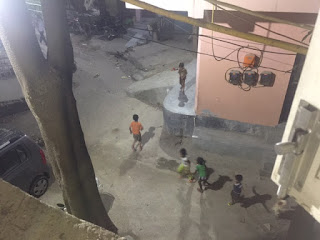 The photograph that you see here is taken at night though it does not look so. In the city that I live, especially in the alleys similar to this one has such lights installed by the Government of Delhi. These lights almost turn the night into day, giving each alleyway the look of a floodlit stadium where a nightly game is on. Under these lights only children come out to play. Men and women no longer come out to share their woes and gossips for these lights expose them too much and the ones who have sorrows need some cover and shadows to hide themselves. Men and women goaded by primitive memories of moon light and the recent memories of power cuts prefer to gather under dim lights than such flood lights.

I asked somebody who knows everything about such alleys about the sudden arrival of such strong lights. He told me that it is to prevent youngsters from making the dead end of such alleys into dens of drugs, sex, mischief and theft. Each house, even if they look dilapidated and desolate in their newness (the old ones have been broken down for redeveloping) has a surveillance camera fitted to their balconies and looking at the computer screen divided into a few frames of grey visuals is becoming a much cherished pastime especially for the bored girls who have been either forced out of schools and colleges or whose marriages have been fixed and are heavily into day dreaming or who are simply bored of looking at their smart phone screens. Only the men folks of such houses look at the monitor once in a while with seriousness. Before they go to sleep they definitely watch the monitor as if they were the old emperors looking for invaders from the hinterlands. 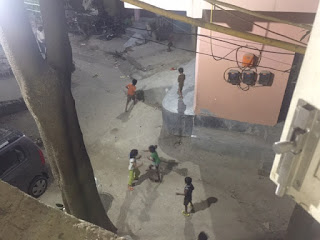 These were the same alleys that once remained the narrow corridors of varied activities. But now everyone with a redeveloped house feels much better about themselves as they are having western commodes to shit and gas stoves to cook. Modernity has an absolutely different meaning in these quarters, it seems. For them modernity seems to be withdrawing into the innards of homes and watch the world through the CCTV grabs. The world has turned against them. The dirty grey world out there is constantly on a look out for a chance to thievery. These CCTVs give a chance to counter voyeurism. You don’t like a voyeur peep into your bedroom or bathroom. But you like to peep out into the whole world through your grainy little monitors.

This is the dead end of the alley where children gather to play. From any first floor window in any part of the city you would get a sort of bird’s eye view of the place. You could just stand at the window and watch the world in killing day light and blinding flood lights with the arrival of night. Counting children who come out to play is an interesting pastime for me. Each summer I count them and surprisingly their numbers are increasing. In this summer I counted twenty two of them; two full cricket or football teams from a single alley. But they do not play football and cricket alone. Like a drop of ink fallen into a glass of water, they take different shapes and device different kinds of games. While a group of comparatively elder children watch them over. Girls teach girls their girly games. Boys teach boys their boyish games. Boys huddle up share some terribly secret things and disperse as if they were statesmen of a few warring countries while the girls cuddle up each other and giggle and take leave with a smile on their lips, mischief in their eyes and a spring in their heels. 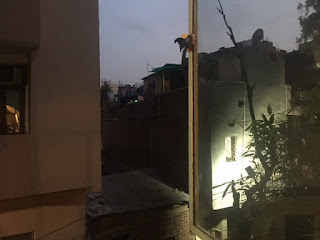 I ask myself whether these lights are good or not. I had seen children playing under the good old yellow light which are called ‘street lights’. When they played under street lights each of them had a shadow to run around with them. Those shadows used to have some kind of life of their own. Sometimes I used to think that the shadows would separate themselves from the children and go to play on their own. But these shadows cast by the white lights are not impressive as they used to be with the yellow lights. These shadows remain with the children always; walk as they walk and run as they run. They look afraid of losing these children in the other end of the alleyway. So they keep a watch, remain closer to the ground and try to be happy. Brittle as they are, children show a lot of resilience to survive the light. They look like forms made up of white biscuits and dark chocolates. They could break and melt at any time. But they know how to preserve themselves even in the direst of the conditions.

From the other window I see the sky. I could see a lot of sky from all the windows a couple of years back. But now the sky has hidden itself behind the buildings. The forms of the sky that I see always stand above the huge synthetic water tanks on the tall building, as if it was looking into the tank to check the water level. The eagle that had hit at my head a few weeks back tells me that somewhere there is a sky. I train my eyes to see it and I see strangely shaped sky here and there. But the eagle does not show sky alone. It indicates there is garbage dumb somewhere near. Eagles survey the land and land where they find garbage or butcher shops. These days they do not go to the butcher shop to have some meat because butchers have become now ordinary people and new butchers have taken to the streets. They would butcher anybody who could be a potential butcher. So the eagles look for dead animals and they are sure they too are dumped somewhere in these garbage bins. Luckily the Government has carefully avoided flooding that area with white lights therefore you just need to smell the way out, not necessarily see the trash that perhaps you yourself have dumped in the morning and escaped the vigilant eyes of the cows, dogs, crows, eagles and rag pickers who don’t look different from these animals and birds.

You may not find such places exciting. But I do not think that the places that have been regimented including the fun parks and malls have anything to offer in terms of excitement. I silently walk through the streets and I find only fear lurking there. Death whizzes past me at any given moment so I keep very close to the broken boundary walls that smell with ammonia emanating from the urine of men and women. I come back to the lonely room which is quite comfortable with my computer, books, desk, chair and everything in place. What a soothing feeling it is to get back to where you belong! I open the window and look out. Yes, the children have come to play.
Posted by JohnyML at 2:33 PM