Chameli Ramachandran’s Home and Beyond 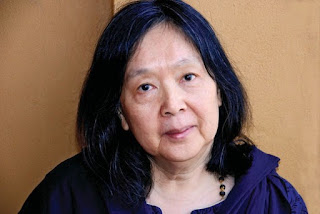 ‘Home and Beyond’ is the latest solo exhibition of Chameli Ramachandran at Vadehra Art Gallery, New Delhi. Chameli has always been a mono-chromatic artist who loves to work with Chinese ink and to add a little turbulence to it a dash of watercolor. Turbulence cannot be and shouldn’t be a word to qualify any aspect of the artist for her presence itself is a defined absence; so subtle is the presence of this artist that it could create the turbulence that the petals of a flower could create on its own. So, the turbulence that I am talking about is one that has been created by the flower petals, the pigeons’ wings, winds that passing through the lean trees and the snow flakes. Chameli is a worshipper of natural elements, a pagan with a lot of refinement with an Oriental serenity pervading all aspects of her life. In this show, she has done ninety works on paper and it is a tour de force. Considering Chameli’s age and physical frailty due to it, it is a rare achievement. 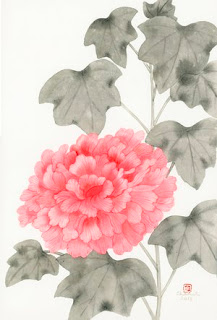 When I see the works for the first time (though I have been following her works for the last two and half decades each time I see a new body of works it gives me the feeling of seeing them for the first time) what I think is nothing but the expression ‘what an indomitable spirit’! Despite age, Chameli has done something that only a very healthy mind could do. The mind that is the channelizing force behind her works, exactly the way nature goads her to let it flow through her with all its subtleties, is alert and receptive which always say that whatever she sees could be turned into an isolated piece of visual. The excising process involved in looking and seeing by this artist is very important because even if she has been living in the city of Delhi for quite some time (and in Kerala and North America during the winters), what she sees are the trees, the birds, the clouds, the sky, the flowers and the winds. This is a selective viewing, which is made possible by age and wisdom; perhaps she has been gifted with this ever since she was born. 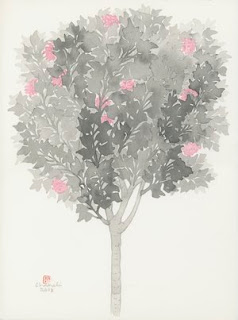 Born to a Chinese scholarly couple who came to Viswabharati University to teach, Chameli was named so by none other than Rabindranath Tagore. In one of the utterances by the artist herself, currently available in the public domain, she says that the name ‘Chameli’ was given by Tagore himself as it was vogue in those days that the parents took their infants to Tagore so that he could give them the right name. Chameli was given that name because Tagore said that the Chinese names had three syllables, so was the name Cha-Me-Li. Chameli grew up to love Tagore’s poems and philosophy perhaps never wearing it in her sleeves like many others do. After a short break due to familial responsibilities Chameli took up painting again only to do several solo exhibitions and group participations. ‘Home and Beyond’ has the works done in the present year. 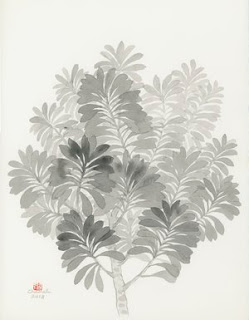 The works present could be categorized into four sections; flowers, leaves, trees and landscapes. As I have mentioned before, Chameli deliberately excises the scenes that are not palatable to her. One perhaps wouldn’t come across an architectural form or even a human form in the works of Chameli. I do not know whether her sketchbooks contain such figures and forms. But in the public expositions of her works, she chooses to present only the works created out of the ‘natural’ images. Is it because that the artist wants to avoid the other scenes and figures from her works? Or is it because the artist prefers to live in a romantic world where she always finds in the company of flowers and trees? What could be the driving philosophy behind it? According to me, when Chameli paints/draws these images from the nature, she does not avoid any instead in these trees, flowers and landscapes she find the whole that includes all other animate and inanimate beings and objects. 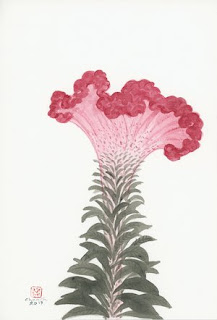 This is a kind of nature worship that does not have a prayer book or a holy text, nor is it constituted by a cult or a group of worshippers doing the same and moving towards the same goal. In this highly personalized genre of art, Chameli even hides the scientific precision so that a botanist also could be thrown off balance. She does not leave any surety about anything. She presents a slice of nature the way she perceives it and takes all the pleasure in doing so because she finds the whole in it. Each painting done in a somber mood embodies a world and the specificities of locations are also erased from them. In her earlier paintings the pigeons could be from anywhere in the world; in the present body of works, the trees, flowers, leaves and landscapes could be from anywhere. The landscapes, however are seen a bit exotic as such landscapes cannot be visualized by one and all unless and until he/she privileged to see such landscapes. 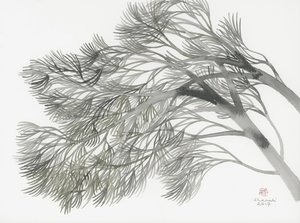 Chameli has used a lot of sepia tone in her earlier works. But in the present body of works, she uses predominantly the black ink wash that makes the bodies of the works so transparent exactly the way old age makes one body transparent and luminous, showing the veins running like tired rivers beneath the undulating landscape of skin. The flowers are agile and fresh and they show the vigor and happiness of being alive. However, the leaves are tired and wilting. There is a silent storm passing through the trees and they are ready to bend. One may be surprised to see that there is not a single tree in Chameli’s present body of works that stands straight. Every tree is caught by strong winds and is ready to bend. Chameli’s body feels the pressure of time and she transports them to her images. The invisible wind therefore becomes symbolic and the bending woods and branches become quite emblematic of human condition. 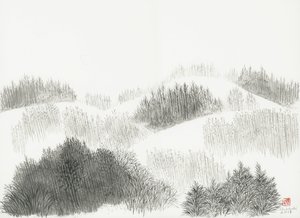 The landscapes are snow clad and there is no green to be seen. It is quite Chekhovian. One could see invisible pathways lined by turbulent trees. One could also see dormant grass and tolerant shrubs standing subdued under the pressure of the snow. Interestingly, Chameli does not give any clue of snow and its softy barrenness. But the silence that is pervading her whitish landscapes with dark patches for grass, the undulating expanse and the glass like sky give us the feeling of stillness; a stillness that one feels when one accidently steps into a precarious scenario. There is no danger apparent but there is no security either. And the only way to overcome that feeling is to absorb and make the scene a part of your own existence. That’s what exactly Chameli does in her new body of works. 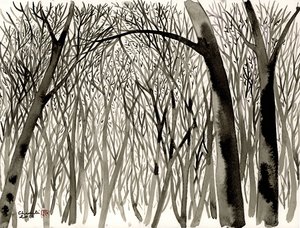 If I write any word like ‘meditative’ it will suddenly fall into the rut of religious spiritualism. In Chameli the spiritual feeling that one gets is not of a religious kind; it is of a focus and depth. If you are excited for anything, witnessing Chameli’s works would put you into a sense of tranquility. The stillness is infectious. It is said that Chinese painters painted landscapes for meditative purposes. They were like spiritual martial artists perfecting the strokes with ink and brush on paper. Chameli has that ‘sanskar’ in her; the element of focus and depth towards perfection. That’s also one reason why she sticks to the Chinese ink and brush. During the last half a century or so, she could have used any other medium or material to diversify her creativity. She stuck to one and became very proficient in that. Only when you are in love with what you do, you could continue it for long even when it is not liquidating itself for riches. Only when you see the whole world reflected in a drop of dew you could conserve it for you feel that you live in that dew. There is a good thing about living inside the dew; you become as small as that, as precious, as tender, as subtle, constantly reflecting the universe in you. Chameli is that dew drop; very precious in Indian art.