Crash: 9/11 and its Aftermath by Akshay Kumar Seebaluck in Khairagarh 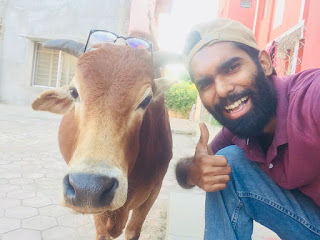 Akshay Kumar Seebaluck, a final year MFA Painting student from Mauritius at the Indira Kala Sangeet Viswa Vidyalaya aka Khairagarh University uses his art to respond to the contemporary as well as historical events. In his studio at the Painting Department there is a painting in a corner, which he proudly shows to everyone saying that he has done that work keeping the deluge that had devastated Kerala in the month of August 2018. Unlike his other paintings, this one dedicated to Kerala is predominantly black interspersed with dark olive green with white strips of paint oozing down, indicating the cascading of water from the high dam shutters. He hardly uses black and dark green in his other paintings; Khairagarh being a place full of lush greenery, any artist should be carried away by the force of such emerald green. But Akshay mixes a lot of greys and whites to his green in order to tone it down to reflect a serene state of everything including the daily routine of the people in Khairagarh, their attitude towards education (which is seen in the number of schools here) and the calm flow of life in general. His human figures are not the rotund kind but the stick ones that get stuck in the viewers’ mind. There are a lot of verbal graffiti that in a closer reader reveal the queries that the artist himself carries around in his mind. He remains silent while his paintings speak for him through the visuals and the textual interpolations. 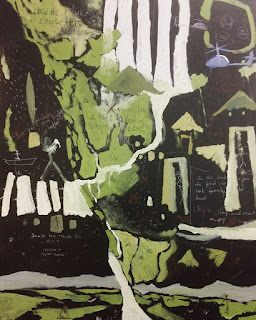 The work dedicated to Kerala by Akshay is not shown to many. Nor does he intend to do so. Upon asking why he does so he says that he likes to respond rather than react but it is not necessary that his responses are dealt with immediate. He is not led by any collective guilt but he is always goaded by the ideal that an artist has a social responsibility and he is supposed to act upon it or deliver it in the most feasible and possible ways. Hence, Akshay, coming from Mauritius, a place far away from Kerala, feels the responsibility of being one with the people who have been suffering. He suffers silently along with them and his suffering is seen in the painting. Typical to his style, a closer look reveals that in this painting too he has employed verbal graffiti of which the one strikes at my mind is the question on the top right of the painting: Has the Dam waters caused the deluge? This has been a question raised by many an environmentalist in Kerala and they dubbed the flood as a man made one rather than a natural calamity. While debates are on and the artists in Kerala are still responding to the situation quite emotionally and often sentimentally, Akshay’s work stands out elsewhere, far away from the public glare and attention, in the corner of a sweltering studio but still evoking the questions being asked currently not only in Kerala but also anywhere in the world where dams have been posing critical danger to the hapless human masses. 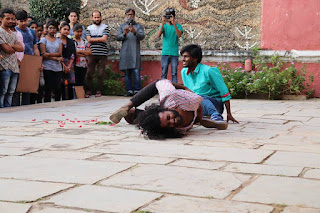 (Beginning of the installation -performance, 'Crash'

‘Crash’ is one such response by Akshay, which is at once an installation and a performance combined together in order to commemorate and also to raise a few disturbing questions on the seventeenth anniversary day of the notorious 9/11 that had not only collapsed the iconic world trade center’s twin towers in New York but also conveniently created a global ‘other’ in the persona of a Muslim terrorist. With the incident which actually changed the course of history into pre-9/11 and post 9/11 has raised so many disturbing questions regarding the fight against terrorism by the United States of America. Akshay is not a direct victim of this event. In fact except for those people who got inadvertently entangled with the event and the US citizens in general the general population of the world was more or less unaffected by the incident. But it took for them to realize that a little bit of post 9/11 would come to their lives in terms of so many global sanctions and restrictions, price hikes, stringent economic orders, political dominations and the growth of right wing politics, disaster capitalism and the proliferation of the weapon industry through maintaining small scale wars all over the world; and also by setting up the democratic governments against its own people. In this sense, the 9/11 incident is in our lives even today. 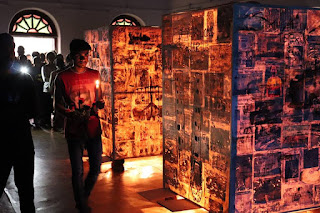 Perhaps, after the first Gulf war in 1990-91, the 9/11 was an accidentally televised global spectacle which came to have far reaching visual and psychological consequences among the world populations as they partook in the event as shell shocked spectators. It was one incident that consolidated the human psyche against a global other and the scale of the attack on the twin towers was so massive that saving the attacker even by playing the Devil’s Advocate could have been a self-alienating attempt. But over a period of time people start probing into the veracity of the claims of the successive US Governments, the posing of their military-industry installations and also the aftermath of the chain of events that had created an unprecedented narrative in the global scenario. Akshay perhaps stand at the other end of this spectrum as a young artist who relives the 9/11 event as a part of history as well as a memory and contemporary folklore. However, he, detached from the event and distanced by times asks certain uncomfortable questions through the whole performance cum installation that was held in the Darbar Hall of Khairagarh University on the 9th September 2018 to which I played a curatorial consultant’s role. 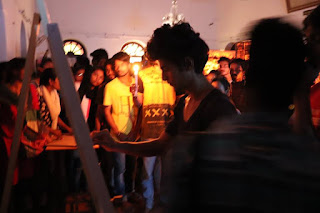 (the Interactive part of 'Crash')

The project ‘Crash’ is developed out of two surrogate towers, symbolizing the twin towers that had come under the attack, made of canvas stretched over rectangular cuboids. The canvases are etched with the press cuttings culled carefully from the reporting of the event all over the world and Akshay cleverly and artistically create a submerged narrative of questions regarding the 9/11. The reports thus transferred on the canvases start as mere reportage and slowly they take the form of raising questions, probing into the details, victims’ narratives, experts’ observations, global economic and cultural fall out etc. The ‘twin towers’ are then interpolated by the stick figures as well as the textual graffiti created by Akshay himself, which are lit from inside so that in the darkness of the hall they appear like two large pieces of embers that refuse to die out. According to Akshay, this emblematic representation of the event is way of raising the question that never say die once again; has the War against Terror achieved anything? Where are we in terms of terror? Even if the artist does not ask the following questions directly, as witnesses we could ask ourselves; what happened to the relatives of the human beings who got involved accidently in the incident? Who are responsible for the wastage of a large number of human lives? What has the US Government achieved after creating the global other? Has the growth of the right wing all over the world ever since in any sense helped the positive human evolution. Questions are many and answer could be always in the negative or in a sort of vagueness. 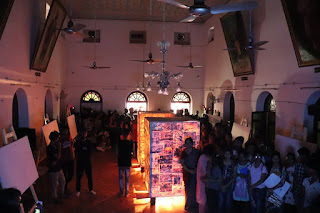 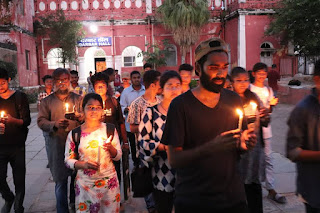 (the Culmination of 'Crash')

As some onlookers did not know what exactly was going on, one of them exclaimed, ‘has Diwali, the festival of lights, come so early this year?’ It could be jest partially and serious too. But the 9/11 was a spectacle that has meant to go wrong; but still it was a spectacle, a lesson for the Ravanas of the world, calling some Ravanas and some assuming the role of Rama. The performance was persuasive and the installation in the darkness was quite poignant enough to evoke the terror of the crash and also capable enough to evoke piety towards humanity in the minds of the onlookers.