Why the Jakarta Mermaids Should Make Us Think about India’s Public Sculptures? 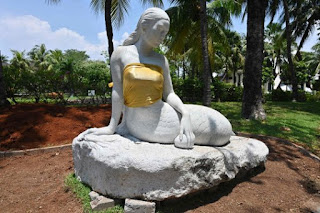 (mermaid with blouse in Jakarta)

It did make to international news though this part of the world neglected it completely. Had it been in the West perhaps the news would have rocked the art world exactly the way the shredding painting by Banksy had done it in the Sotheby’s auction hall. But it happened in a small eastern capital called Jakarta in Indonesia, a relatively Muslim majority country. In an entertainment park called Ancon Dreamland a woman artist whose name has not yet been featured in the news was commissioned to do two mermaid sculptures as a part of beautification. Today the sculptures sport two golden blouses around their breasts, a move carefully done by the park authorities in order to keep the ‘eastern family values’ and they insist that they have not been pressurized by any religious moral policing groups. It has been reported that initially the cover up of the breasts was done with a coat of paint and later with a pair of golden tube tops. Now, to the dismay of many the sculptures are moved to some unspecified location for further sprucing up. 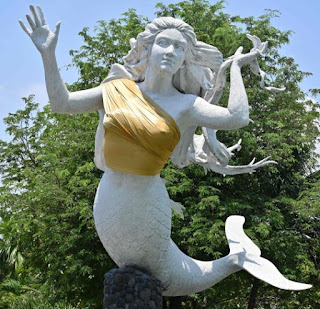 (another mermaid bloused in Jakarta)

One does not need special mental abilities to understand it as a part of self/internal censorship by the park authorities. The very denial by the authorities of the external involvement proves that there is one if not many. It should be nothing but an ‘eastern’ sign of how Indonesia too going the ‘right’ way. World over the right wing forces have been prowling the streets to identify the morally incorrect art but only thanks to the predominant museum cultures of the West prevent them from making unwarranted entries into the premises. Besides, the museums are patronized by huge corporates whose lobbying powers with the existing governments are more than an ordinary citizen could imagine. Hence, even if the right wingers try their best to make dent on the museum culture in the west they will be disappointed. With a strong museum culture adding a lot to the tourism economy of many states no political outfit that seeks public approval would venture into moral policing. But that is not the case with the South Eastern countries. 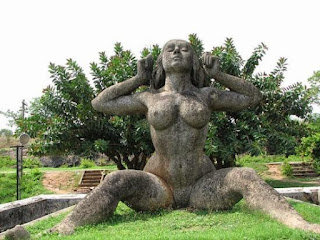 Sitting on the powder keg of the right wing politics or right wing inclination of the influential political parties the south east Asian countries could soon turn into self-censorship as a part of their appeasing policy towards the conservative political climate. The fear factor that the right wing could destabilize the political equations and the growing anxiety among the public regarding their conflicting moral norms with the ongoing debates on socio-sexual mores could in a way make the public silent over such moves. Despite such silence and lack of interventions, there are people from odd corners of the world commenting and lampooning the authorities over such moves. Talibanization of Afghanistan was one such move in the recent history that we saw spilling over to the post war Iraq when they were destroying the museums and artefacts. Religious fundamentalism, when mixed with Nazi and Fascist tendencies could prove the most dangerous Molotov in a socio-political and cultural climate.

India has been showing such tendencies for quite some time. Though it was not driven by organized right wing parties half a century back, the right wing feelings and tendencies were instrumental in making such ridiculous moves towards art and culture. Similar cladding of the breasts was attempted on the illustrious ‘Yakshi’ sculpture by Kanai Kunchiraman at the Malampuzha Dam site in 1969.  The right wing youngsters from the area demanded an appropriate dress for the otherwise fully naked Yakshi whose body is provocatively opened to the audience/public. A very clever official who headed the contract of the site pacified the right wing youths saying that a mill at Coimbatore had been approached for a specially made sari for this thirty feet sculpture and it was awaited anytime. Whether they believed it or they were amused by the poetics of such a clever move, they called off their agitation. Today, Yakshi still sits naked exposing her ‘sex’ to the visiting public. So far no concerted efforts have been made to clad this sculpture by the strong right wing parties in Kerala. But the brittle acceptance could break at any time if political moves in India take a ‘real’ right turn. 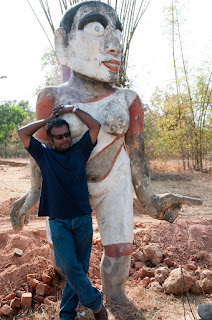 (Navjot Altaf's sculpture given a sari by the Bastar Panchayat. Also you could see JohnyML)

M.F.Husain and the nudity portrayed by him on the Hindu Goddesses are now folk tales of the leftists and secularists. With Husain leaving first the country next this world itself, the right wingers seem to have buried their differences with him provided his works are no longer exhibited or openly sold in India. Husain for the Hindutva forces is like beef, it seems. Beef is banned in India, more or less. But in Beef Export India stands second in the world with 18% world share. The first place is for Brazil and the difference is only one percent. In Beef Export India has pushed both Australia and United States, two beef producing and eating countries to third and fourth positions respectively. Husain’s stock in the art market has not come down even if he is ‘hated’ by many Hindutva leaning market leaders including the Ambanis, whose art collection stands unparalleled in India. How does it happen, nobody knows. Perhaps, in the right wing regimes what is more hated is more circulated surreptitiously and dearly. Where sexual morality is in its stringent forms, you would have a grey market or a black market with thriving porn business.

India’s hypocrisy in terms of sexual morality is still growing. There have been efforts to clad sculptures, remove paintings from the exhibitions and even apply self-censorship by the organizers. Anybody claiming to have allegiance with the dominant right wing outfits could walk into a gallery and remove paintings and sculptures citing nudity or sexual morality as a reason. Nobody could stop them. They could stop films from making, demanding changes in the script, stop screening of movies, asking for changing of the titles. Non-obliging artists could be manhandled by them. Once in Bastar, Chattisgargh, Navjot Altaf made fifteen feet standing nude woman sculpture which was soon given a painted sari by the Panchayat for the state was then ruled by the right wing outfit. The threat is still growing. Artists have been very cautious in making visual statements. Like we have seen in history during the Fascist regimes, artists in India too have gone either silent or tactful. They have stopped openly criticizing the ruling despotic regime. Many have crossed over to the dominant camp showing willingness to paint of and for the rulers. 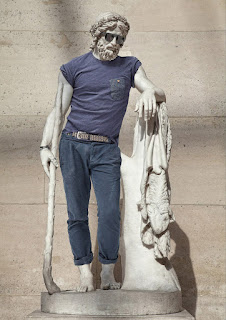 In India there are so many sculptures in the public domain that have pronounced nudity. They have been there and were not disturbing the public morality at all. Even the oft quoted temple sculptures in various parts of India were basking under the sun wearing only sky and air for clothes. Soon they are all under surveillance. When political morality becomes vicious they compensate it with sexual morality. The more a society gets its upper echelons corrupt the more it tightens its grip on sexuality. Corrupt power employs sexual morality to whitewash its decaying facades. If we, as a society elect the right wing forces to rule us once again the possibility of our public and private works of art wearing under and upper garments cannot be ruled out. Even an electric post or tree trunk with a remote semblance of a female body part would be covered by force and definitely by order. What happened in Jakarta is not an alien thing. The process has been on in India for long and more pronounced during the last five years. Let us learn from the signals and uproot the cause than treating the symptoms misreading them for the disease.