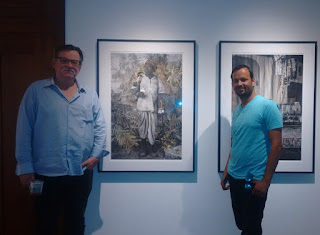 ‘Gauri Dancers’ is an artist’s photographic retake made into a book apart from limited edition prints of the same, on a traditional religious performance art confined within the Mewar region of Rajasthan and the book is also a well-researched documentation of the same. Udaipur based artist, Waswo X.Waswo is the prime mover of this book and he has not only taken the photographs as his artistic output but also has contributed a very pivotal dialogic text that sets the tone and tenor of the aesthetic decisions behind each photograph. Apart from the artist himself, he has his long term collaborator Rajesh Soni who hails from a family of traditional hand-colorists on black and white photographs, now perhaps a redundant art form but amply revived by conceptual photographic practitioners like Waswo, and Pramod Kumar G, a researcher on photography as a medium of art and documentation and a publisher and archivist, who in introduces this book in a crisp academic note. And finally the main text (that is almost a sub-text or a meta-text of/for the photographic images) is written by Sonika Soni, an art historian and researcher who has been interested in the Gauri Dance/rs as she hails from the same region where this dance is practiced.

Despite the claim of having centuries-long tradition and practice, Gauri Dance which is also known as Gavri Dance is a limited art form not in its expressive faculties but in its geographical confinement. Perhaps, it’s limited reach and fame is the major reason that has goaded Waswo to work with the practitioners of this rare rural art form though he disputes his possible role in this project as a documentarian or an anthropologist. Waswo assumes different personalities in his verbal essay (as a preface to the visual essay that makes the main body of the book) of which he identifies more with the ‘artist’ incarnation than the ‘anthropologist’ or the invisible ‘narrator’ who makes all of them speak. These disembodied voices appear as a representational conflict within the text and the questionable agency that activates the events inside and outside the book. The apparent conflict is manifested in the dialogue between the artist Waswo and the anthropologist Waswo. Sometimes, there is also an archivist Waswo. Ironically, the artist Waswo is constantly questioned by the other counterpart selves calling him an ‘anthropologist with no research or an archivist no responsibility.’ 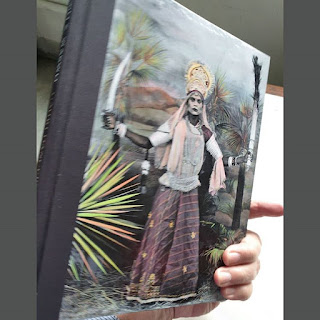 The accusation coming from the anthropologist self of Waswo and the apparent danger of not having enough research should have intrinsic reasons in Waswo, the personality and artist whose ‘outsider’ status has been self-problematized for a long time in his works done together with Rajesh Soni, R.Vijay and other assistants and also in the graphic novel, ‘Evil Orientalist.’ Waswo has been living in India nearly for two decades and has more or less naturalized his avuncular status among the villagers in Udaipur, still some questions arise from certain quarters regarding his worth and authenticity as an ‘Indian’ who could comment on the ‘Indian’ things. Waswo besides being an artist has been handling this tender question quite skillfully ever since it was put to him in various occasions. Hence, in ‘Gauri Dances’ Waswo the artist says that it is neither the anthropologists nor the archivist sees Gauri Dance but the artistic eyes, which goes beyond all kinds of extraneous value judgements and stick to the aesthetic finesse of form and performance.

From Waswo’s narrative preface we come to know that it was a chance encounter with a couple of young male performers festooned with ornaments and odd and jarring clothes that made the artist aware of the existence of a group of people who did Gauri Dance. Asking around he got his answers soon from the locales and from his own assistants who did the painted backdrop sceneries for his photography projects. These boys and young men came from a region called Mewat and they performed this Gauri Dance for forty days from the very next day of the Raksha Bandhan. As it involves a religious theme (of Shiva and his consort Parvati who is also called Gauri) the performers abstain from all kinds of vices for forty days and they are fed vegetarian food by the host villages. Interestingly, the host villages are where these performers have their kith and kin through marriage ties. This indicates the closely knit tribal nature and a sort of exogamy practices prevalent among these tribes which also explains why this art form is limited within certain geographic limits. 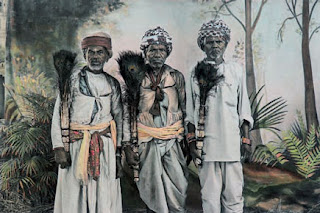 Waswo gets interested in these dancers and decides to photograph them against the backdrop painted by his assistants. He clicks them in front of different backdrops as they present themselves in cheap but full regalia; a sort of iconography that decides the characters in the play. At one point, exasperated by the variety of actors Waswo the artist asks about the peculiarities of these characters and suddenly the anthropologist comes out from the wings and grins at Waswo; a hint at the fact that however one tries to avoid anthropological therefore sociological, political and economic meanings of an event or image, at some point they have to be addressed even by the staunchest aesthete among the artists. Rajesh Soni, later hand paints these photographs and they are presented as limited edition prints apart from this book.

I don’t know whether an exotic gaze is at work when Waswo clicks the pictures of the Gauri Dancers because in his practices either he naturalizes everything when he is not exoticizing them. He photographs artists, friends and causal visitors in his studio in certain costumes suitable to his fancies and whims of the moment. And his subjects happily oblige to get photographed (for them a way to immortality through the work of an artist) and even for the Gauri Dancers, despite their demand for a remuneration thanks to their dire materialistic conditions they too are eager and willing to get photographed by a fair skinned ‘chacha’. He turns them into icons unlike some of the other photography artists who turn their subjects to anthropological specimens as we have seen in many a documentary photography including the Gotipua Dancers from Odisha done by an artist namely Birendra Pani. 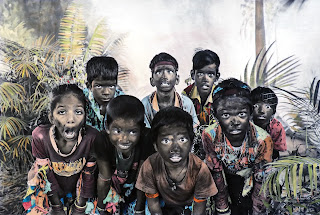 Gauri Dance is definitely rooted in folk traditions of story-telling and performance. Like the Bhopas in Rajasthan and the Patuas in Bengal and Odisha, these dancers talk, sing and perform. Though the major theme is devotional, ribaldry and humor play a major role, which interestingly is the main characteristic of most of the tribal/folk/traditional performance art. The etymology of Gauri Dance also leads us to its Brahminical roots and it was when a lower caste person (may be from Gometi or Meena caste who perform Gauri Dance in the modern times) tried to imitate it, the Brahmins lost interest in the art form and left it for the lower castes to perform it. It could be read as a handed down (even if the reason is pollution and irritation) art form, it could also be seen as a rebellion and snatching away of the right to perform by the lower castes. Even in Kerala, Ottan Thullal is said to have started when Nambiar was ridiculed by the Koothu performer. As rebellion Nambiar went on to start a counter performance involving a lot of ribaldry and humor. The myths behind the Gauri Dance are interesting; they range from the stereotypical victory of the good over evil to environmental issues, family ties to nostalgia and so on. Sonika Soni in her well researched essay delineates a range of myths and the various categories of performances. The text of Soni appears in this book more like an epilogue rather than the main text. Even if Waswo, the artist gains an affirmative victory over Waswo the anthropologist or the documenter, the book could be read even for the sake of anthropological interest and documentary purpose, obviously when you are full with its aesthetical nuances.