Icarus Searching for His Land: Waswo and R.Vijay Strike Again 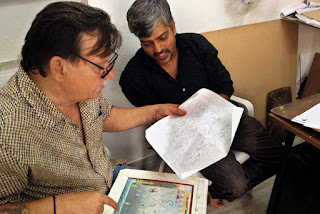 ‘Like a Leaf in Autumn’ is the latest exhibition by Waswo X Waswo and R.Vijay at the Gallery Espace, New Delhi. Perhaps, these two artists make the most successful duo in Indian art scene. They have not flown too far away from the ground and also not too close to the sun. Hence, their output as well as success has been steady all these while. Unlike the other duos in the Indian art scene, Waswo-Vijay does not indulge in authorial ambiguity that makes the style definite and recognizable while the roles are merged to become one. Waswo-Vijay duo comes together to create a solid body of works but defines their roles separately; R.Vijay as the visual executor (of course after much deliberations and angry take offs) and Waswo as the conceptualizer cum director. Together they make a perfect combination.

‘It Never Works the Way You Think’ is a work from this show, which I believe captures the crux of the argument that Waswo as an Evil Orientalist has been forwarding ever since he decided to make India his first or second home depending on the season that he prefers to be in Udaipur. The argument is simple: Can an artist from the other shores be an Indian artist? Can an artist do away with locational adjectives that qualify his name whenever it is mentioned in the land’s history as well as art history? We have had Nicholas Roerich and Svetoslave Roerich from Russia who almost became Indians as they chose to live in the foothills of Himalaya. We have had Elizabeth Sass Brunner and Mary Sass Brunner the mother-daughter duo from Hungary living very much in Delhi. They still hold their locational honorifics. Perhaps they wanted to be known as Indian artists. Waswo, a Milwaukee-ian, an exceptionally different provincial American who however knows his Duchampian tricks to be right in the middle of the things but doing things well instead of playing chess with nude models, but yes definitely capturing the hopeful visitors into images meant to be eternal thereby giving them some lease of posthumous life, must also be wishing to be known as an Indian artist. But the conflict is felt even when he naturalizes himself with the history, politics and living surroundings of the place. 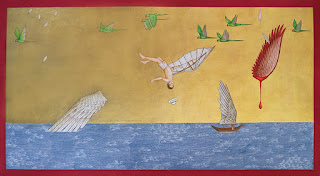 (It Never Works the Way You Think by Waswo and Vijay)

This conflict is given visual embodiment in the constant presence of a Bisleri bottle, a brand of bottled drinking water which initially had become emblematic to the Westerners’ mistrust in the basics of India, meaning drinking water and breathing air. In his works, we see a plastic bottle inconspicuously lying around making its presence too strong to be inconspicuous. Also the hat and the red polka dotted neck tie. The man is either relaxing or reading, or he is simply trying to be someone who is not himself. And all the other times he is running behind invisible butterflies like a serious lepidopterist turning the very chase an occupation in itself. As we do not see any butterflies per se, we have to understand that the artist is in a wild goose chase within the wild but without the goose anywhere in the vicinity. But this absurdity of a chase has deeper meaning when I see it in the abovementioned conflict; of being in one place and belonging there completely. Ruskin Bond, just because of his white skin despite his natural citizenship in India, being an Anglo-Indian but more Indian and rooted than any Himachali, still faces this issue of belongingness; Waswo can find some solace in Bond, not James, but Ruskin.

‘It Never Works the Way You Think’ is an epiphany; a title that reveals all his revelations. It does not happen in that way dear, he pats himself and says. But the painting has something more to say. This is the tale of Icarus; the son of Daedalus, the master craftsman. They were under captivity in a tower and by looking at the eagles, they thought of escaping from there by sticking feathers to their hands, making workable wings. They were defying science (don’t ask from where they got wax for sticking the feathers. There is no question in the story) and Daedalus had only one advice for his son; do not venture too close to the sun for the fear of wax melting. But sons are always sons before they become fathers. They rebel; and upon defying his father’s words, Icarus flew quite close to the Sun and the wax melted and he came dropping like a stone to meet his watery bier. We see the surrogate Waswo, painted by R.Vijay landing on his nose in the vast ocean. This is the perennial fear of the artist himself; do not go too close to the sun where you think everyone got a place and there is hope for everyone. India is a tilted place still when Waswo looks at it in terms of his own belongingness. I do not insist that Waswo agrees with it. 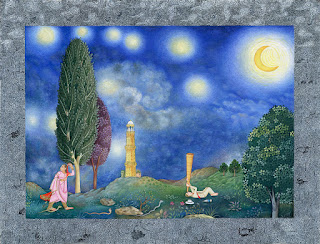 (Starry Night by Waswo and Vijay)

My belief on this interpretation deepens when I see the free standing severed wing, like in a no man’s land/space in between (neither here nor there, the liminal space, perhaps an accursed space, which in India is a called the Trishanku Swarga, which is a heaven and hell at once. It is heaven because of the spatial buoyancy and it is hell because it is without roots. Having no roots is hell. That is what all the immigrants feel and suffer. That's why Ambedkar told Gandhi, ‘I don’t have a country.’), reminding the informed viewer of the violated wing of Jatayu, the mighty bird that had tried to prevent the abduction of Sita. In fact, the wing comes from Raja Ravi Varma’s imagination, where interestingly both the abductor and the savior remain hanging in the space and the poignant moment shows three different rasas, of pity, valor and ferocity. Waswo removes all those and emblematizes the wing with no space or a safe space in nowhere, and implies that even without a space that wing could belong to the collective imagination of the people because it belongs to the memory of the land. Waswo however is not a complainant; he sees the hope of his rescue in an approaching boat which surprisingly has a sail in the form of a wing. A boat with a winged sail comes directly from the imaginations of hade, the nether world which is aspiring to be hell but not yet one and there are philosophers for the oarsmen in the boat. Hence, definitely Waswo has a chance of being there in the subaltern if not subterranean discourse of art in India. 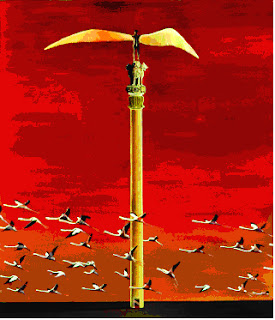 (An Actor Rehearsing the Interior Monologue of Icarus by Surendran Nair)

Waswo reminds one and all that it does not work the way you think; it is not fatalistic like an Indian or Russian imagination where the providential decisions, as in the Grecian interference of Godheads in the local human affairs thwart the human aspirations. It is a pragmatic view of things for Waswo. Man proposes God disposes is not the case; not even the Tolstoyesque ‘God Sees the Truth but Waits’. There is no god to see the truth or to dislodge the schemes. But man made physical circumstances always collapse the attempts and efforts. Waswo had seen it in Kochi when he had come to participate in a Biennale collateral where his efforts to get his works back home were questioned by the unionized laborers to which Waswo’s response was nothing but dropping the artefacts and destroying them. So here he becomes a destroyer than a maker, a master of destruction in the ultimate efforts to keep the personal destiny in hand than letting it go to the hands of the muscled strangers or political gods. But it is good to remind oneself that things do not happen as we think. But it gives hopes to one and all to strive for it. And more importantly, it is one Icarus reference in Indian art after the controversial work by Surendran Nair titled ‘An Actor Rehearsing the Interior Monologue of Icarus’ where we see Icarus standing on the top of the Asokan Pillar waiting to launch himself into space while he sees seagulls flying off to their homes. Here in Waswo we see the parrots coming directly out of the miniature aesthetics and flying home happily to the folios. I have been talking about Waswo all the way but let me tell you whenever I talk about Waswo in this show’s context I am talking about R.Vijay too.