‘No One is Too Small to Make a Difference’: Book of the World Sensation Greta Thunberg 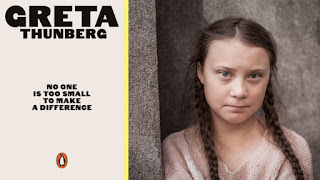 (Greta Thunberg with her new book)

A quick book could be read quickly. ‘No One is Too Small to Make a Difference’ is a quick book from Penguin and is written by none other than the latest sensation in the international environmental activism, Greta Thunberg. A sixteen year old Swedish school girl, whose sole mission is to make impassionate plea to the world leaders, businessmen, lobbyists, huge corporations and all the other select few money spinners to change themselves in order to leave the world for the future generations to leave. Thunberg says that she is motivated by hard scientific fact about environmental depletion which is going to finish the planet earth sooner than later. According to the prediction the carbon emission due to fossil fuel usage all over the world is going to set the clock of sixth mass extinction of the human species (along with the slow and steady perishing of all other species in due course of time) from 2030 if the emission levels are not brought down to 1.5  degree C, which in fact is lesser than the emission level in the pre-industrial times.

This book is a small collection of Thunberg’s small but powerful speeches (one could say cryptic word bombs that strike at the international conscience if there is something like that still left there) made since 2018 at various European forums including the ones in Sweden. Thunberg considers herself as someone coming from a privileged background and she and her ilk could conveniently forget the fact that the environmental depletion is irrevocably underway. But she cannot sit idle once she knew that the planet earth is about to perish. As a school girl she tried to initiate an educational strike in her school and she found cold response even from her friends and the school authorities. That did not stop Thunberg from sitting in front of the Swedish Parliament and handing out pamphlets, like an evangelist in panic mode to the people. The lone school girl’s unique protest (like the Standing Man protest) caught the attention of the environmentalist and other activists and soon her strike took root in the schools and girls stopped going to school for many weeks. 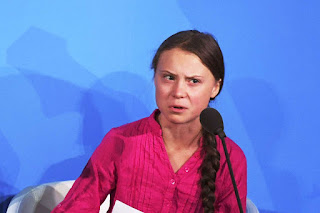 Thunberg is positive about her activism; she says that if so many girls could boycott schools and that in turn evoke similar response in other parts of the world something could really change in the ‘normal’ course of thing. Thunberg’s fundamentals are clear. She says that anybody can bring about a change provided they rethink about their life and its practices. The primary concern should be the reduction of fossil fuel usage and seeking eco-friendly alternatives. For that there should be fundamental changes in the business pattern and the sole aim of it; making profit or amassing wealth in the hands of a selected few. This one-sided flow of global economy has put the whole population in the world at risk for she says that due to the carbon emission and the ensuing ecological collapse 200 species of life are being extinct on a daily basis. The picture is grim and the sight of Thunberg, this sixteen year old girl standing before the world parliament and the UN reminds one of the scene that we had witness in China’s Tiananmen Square (1989), where a young person took on the rolling military tanks stopping them on their mission to curb and kill the protestors who had been asking for freedom.

Thunberg does not say anything complex in all her ten cryptic speeches at various forums and one facebook post in which she explains to her detractors how she is not funded or backed up by lobbies or groups. According to Thunberg, we all can do something to save the planet. Nothing new about it but each one shifting the responsibility to the other person’s shoulder is as good as doing nothing towards the cause. World over there are movements and moves to reduce the emission levels but Thunberg says that there is no point in bringing the emission level ‘down’ but it is imperative to make a situation where there is no emission at all. That may sound her asking for too much. But if we heed that impossibility and try to do something towards it then we would understand that we need to change the rules of the game that we are collectively, blindly but blissfully playing these days. Thirdly, she says that we should be in a panic mode. When your house is on fire you wouldn’t say that let everything burn down and we would start afresh. But what we do is to panic and save even the most insignificant from being gutted. Panic mode is essential to change the situation as our planet is on fire. Also there are detractors who tell her that she should go back to school and study to become a scientist who could contribute more to the world. To this she gives an answer which is fascinating because she tells them that she and her friends would go back to the classroom provided if the grown-ups take to the street to hold up the cause and fight for it. 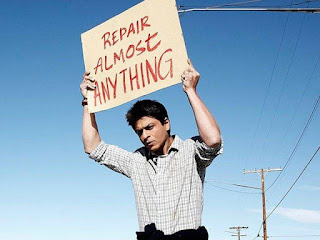 (A scene from the movie, My Name is Khan)

The crisp videos that have been proliferating in the social media for the last few days have made a universal celebrity out of Greta Thunberg as if the world was waiting for a new messiah in the horizon to appear. The younger the savior the better it looks. That’s why I feel I think she is another Malala in the making. Despite the fact that there soon would be a Thunberg industry around her (films, books, merchandise such as T-shirts, music videos, documentaries, morning time chat shows and so on. Already the second book of Thunberg is getting ready for publication which is co-authored by her whole family). But that shouldn’t be a reason for our cynical overlooking of the real facts. Changing today’s habits means changing us completely; means, if you are traveling by cars, then start using the public transport. But the governments should pitch in there to provide cool and comfortable public transport to the citizens. When you insist that people should walk or cycle to the work places, there should be pedestrian and cycle friendly tracks. That means a lot of changes in the society; that’s what exactly Thunberg telling the world. As Kumaranasan had put it; change the laws if not they are going to change you.

The more I look at Greta Thunberg the more I think about ‘My Name is Khan’ (2010) the movie directed by Karan Johar with Shah Rukh Khan in the lead. The Khan character is autistic; to be more precise, he has a condition called Asperger’s, a slightly different condition of autism. Khan in that movie goes to the United States of America and faces ostracism because he is a Muslim and is identified as one in the public especially after the 9/11 attack on the twin towers. Finally after a natural calamity he manages to go to the US President, a black person, obviously Barak Obama and tells him, ‘My Name is Khan and I am not a Terrorist.’ Khan does all what he could in order to convey this message to the US President, the most powerful man of the world so that his words could be heard all over the world and if possible understood. Greta Thunberg too has the Asperger’s condition. She is insistent and she wants to be heard. United Nation’s platform was one good platform for her to reach out to the world. We are practical people so we think that nothing is possible if we go by Thunberg’s line. But something is possible if we are ready to change that is why she says again and again, None is too small to make a difference.