Men in the Chalk Circle: An Art Historical Perspective 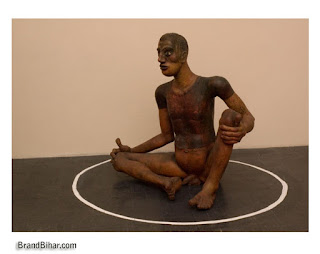 (Man in the Chalk Circle by NN Rimzon)

In 1985, Kasauli Art Centre, New Delhi presented an exhibition, perhaps a first of its kind, titled ‘Seven Young Sculptors’. There was no curatorial claim in the humble black and white brochure though there was a ‘catalogue’ essay written by a twenty seven year old Anita Dube. The participating artists were also more or less the same age and this exhibition is said to be a trailblazer for the Radical Group of Artists who would later change the course of thinking about art in Kerala and elsewhere by fundamentally reimagining an art scenario through romantic and revolutionary terms; perhaps all the revolutions have a streak of romanticism in them. N.N.Rimzon was one of the participants as the others being K.P.Krishnakumar, Alex Mathew, Asokan Poduval, Pushpamala N, Prithpal Singh Sehdev Ladi and Khushbash Shehravat. 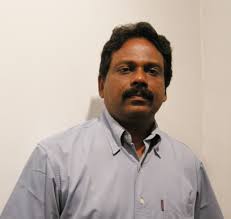 Rimzon’s work was titled ‘Man in the Chalk Circle.’ Influence of Brecht, the German playwright and his Epic theatre was very much in the air and his retelling of a 14th century Chinese story by Li Xingdao as ‘Caucasian Chalk Circle’ had taken not only the field of theatre but also the intellectual domain by force. It was a metaphor for making the right choice; may be the choice was between the natural owners of Germany, that’s the people of Germany and the artificial claimants of it, the Nazis. Partly action-oriented and partly existential the chalk circle had also forwarded the Hamlet-ian dilemma, ‘to be or not to be’ in a different light. 1980s had posed such a political as well as existential dilemma before the artists who had just come of age by passing through the fires of Naxalite revolution and the notorious political Emergency imposed by the late Prime Minister, Indira Gandhi. 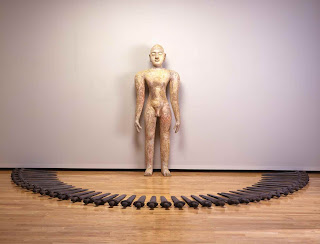 (Man with Tools by NN Rimzon) 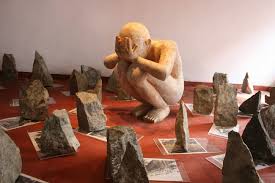 ‘Man in the Chalk Circle’ by Rimzon brings out this dilemma of the time. A man seated on the floor is seen inside a chalk circle that limits his freedom of movement. May be the man does not want to make a move at all because the posture of his sitting is awkward as the splayed legs show. His bulging eyes, remotely caricaturing the artist’s face itself in a brutal and comic way at once, looks into the empty space before him. You would see such vacant staring in the works of Ron Mueck in late 1990s and in the new millennium. I am not going to make any suggestion that this ‘gaze’ (which we could see later in the works of Ravindra Reddy also, a contemporary of Rimzon) is pioneered by Rimzon or something of that sort. However, the gaze of the man in the chalk circle is powerful enough to express his dilemma; to be or to be. The chalk circle, like the mythological Lakshman Rekha becomes an externalization of internal fears as well as the internalization of external limitations. It is interesting notice that for a long time in his career Rimzon kept on experimenting with circular or semi-circular forms that either bordered the central figure (Man with Tools) or defined his space almost suffocating him (Speaking Stones). 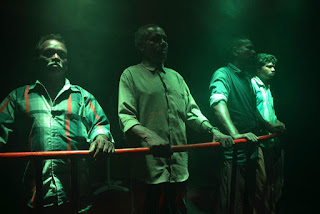 The chalk circle is a metaphor that has become a reality in the recent times, especially when the spreading of the Corona virus became a socio-medical anxiety. Before we go into the details of it and how such chalk circles appeared in the works of artists, it is imperative to see a very important work, perhaps under-discussed, from 2014. Titled ‘Stand Still’ this process, happening, performative installation that turned living human beings into art exhibits or components of an exhibition was intricately political and overtly reflecting the mood of an ongoing socio-political and economic struggle right in front of the Government Secretariat in Trivandrum, Kerala. Ajitkumar G is the artist who made this timely work, mainly taking the cue from the history of an extended political struggle from 2009 to 2014. This installation-process-happening art exhibition took place in the conventional exhibition space at Vyloppalli Cultural Centre in Trivandrum for seven days. Perhaps, for the first time in history of art, a political protest was brought into a gallery space with the protestors turning into art works and viewers at once. 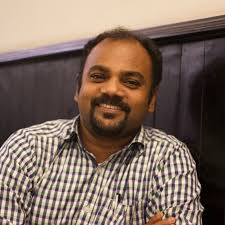 To understand Ajitkumar’s interventional art piece, ‘Stand Still’ one also has to get a glimpse of the said political struggle which had inspired the artist. Despite land reform acts and promises from the successive governments, the people from the Adivasi/tribal communities in Kerala were denied socio-economic and political rights over their ‘own’ forest lands. Whenever they rose up in protest demanding right to land and live the state had suppressed them by using iron hands. In 2009, the tribal people came to the secretariat in Trivandrum and built hutments and lived there for months till they were given assurances. As the government retracted from the promise the people came again in 2014, now with a novel protest; standing and staring/looking at the people who went about with their normal daily chores. They made themselves into a spectacle while making the people around them another ‘moving’ spectacle as well. It was an absolutely novel way of protesting with the pavement becoming the liminal zone where the identities of the protestor and the onlooker collapsed, merged and rearticulated in the mental plane. 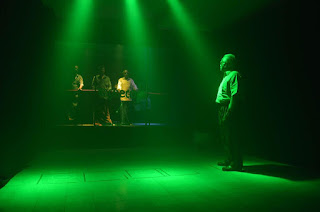 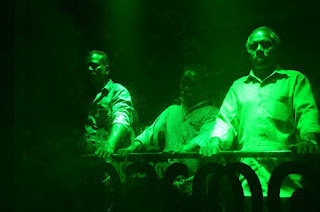 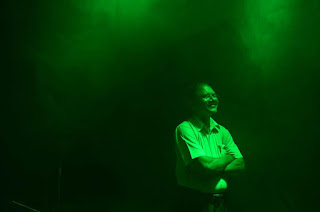 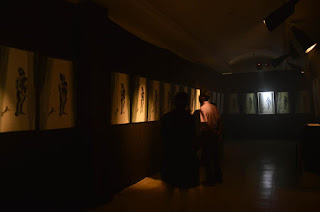 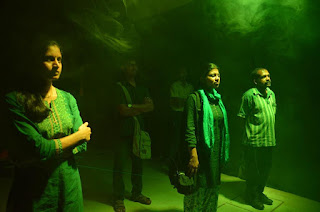 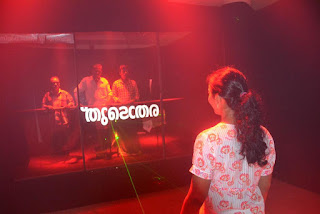 (From Stand Still by Ajitkumar G)

Ajitkumar used the same dynamics that he witnessed in the ‘Standing Strike’. The inspiration for the Standing Strike must have come from Turkey where a man named Erdem Gunduz stood motionless for six hours to protest against the government in 2013. Gunduz became a world sensation overnight and became an icon of a lone man standing and protesting. Perhaps Gunduz also came from the lone man who stood bravely before the Chinese PLA tanks at Tiananmen Square in 1989 during the pro-democratic protests led by students and youth of China. Standing up against injustice is both literally and metaphorically strong; when someone does it the dimensions of it increases. Ajitkumar moved his artistic project quickly to extend the protest to a gallery and called the project, ‘Stand Still’. Interestingly he too drew chalk circles for people to stand and stare. I do not know whether he had remembered the Miltonic invocation that they also served who stood and stared! 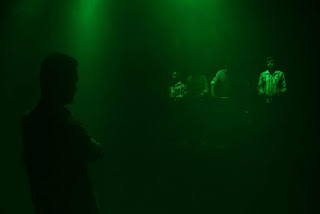 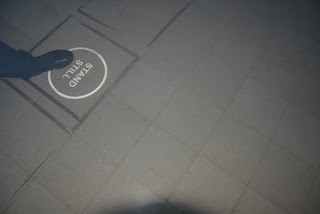 The ‘Stand Still’ project by Ajitkumar was interactive and participatory in nature. He changed the ambience of the conventional gallery and brought in deceptive mechanisms that tricked people’s normal viewing tendencies. With altered light ambience Ajitkumar made the visitors aware that they were going to witness something phenomenal. After a few painted images the people were brought in to a chamber of darkness. A white luminous circle told them to stand still inside it. Then the lights came on them as if they were the gallery exhibits. They could witness their reflection on the glass wall before them and could see the signage ‘do not touch’. While wondering what was on the light on the other side came alive exposing the standing tribal men who stared at them. Who was looking at who, was the perennial question arose then. Were the tribal people, who were temporarily brought to stand inside the gallery without changing their protest-method or attitude, the exhibits or the people who came to witness the installation/art project, the real exhibits? The simulation of the pavement dynamics of the protest was mind boggling and even the then opposition leader, the veteran communist, V.S.Achuthanandan felt that he was stared at by the victims of Kerala’s skewed land reforms. 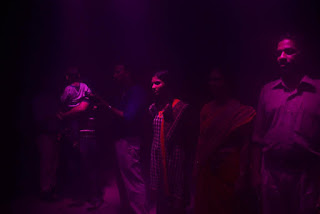 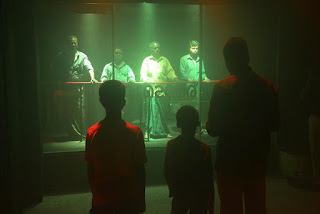 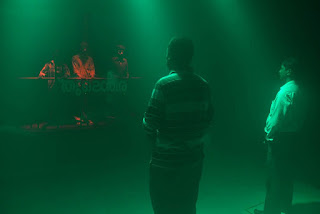 In the performative level, Ajitkumar did mean the abovementioned dynamics to develop within the gallery. But there was a latent and subterranean idea that he wanted to work into and bring out obliquely during the process of ‘exhibition’. The idea of standing still has a lot to do with the idea of very standing itself. As an evolutionary biology enthusiast, Ajitkumar did mention in the brochure written by himself that he wanted to take the whole discourse to the beginning of the human species where the homo species evolved into the Homo Erectus who could, for the first time in the history of evolution since then, stand erect. Hence, standing is a pivotal moment. Standing makes the human being and to stand one needs a place, a land. The tribal people were asking for a piece of land to stand and begin their life afresh. They were a duped people whose right over the forest land was taken away by force but ironically, assured in papers. It was a sort of internal colonization which has been on for a long time. 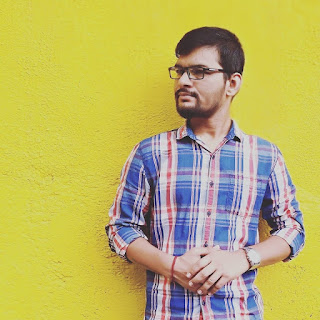 For me the idea of standing also about the idea of dignity which is not a palpable stuff. The dignity may be defined differently depending on the person, his or her status and so on. But dignity is something that gives a human being a sense of existence. Each moment human beings strive to be dignified in life. It is not material affluence that makes the life of the human beings dignified but their right to be what they are. To exercise that right to be what they are they need the right on resources and equal opportunity, both unfortunately are denied to these people. Of late, the Kashmiris are asked to reapply for their lands which they have been dwelling and owning for generations! This is stripping the people of their dignity and by standing up, a person could demand the dignity of life. One cannot sit down and ask for dignified treatment. Rising up for one’s right is important. Ajitkumar underlines that factor too in his project but reminding the visitors to stand still within the circumference of thinking provided by the artist and the people on the other side of the glass and in the pavement. 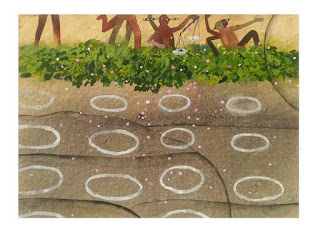 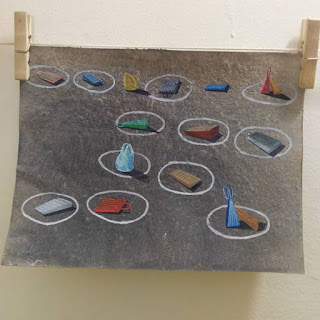 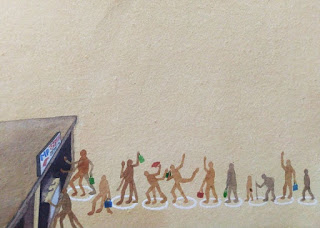 Chalk circles have also become a social phenomenon when Corona virus struck. Social distancing (in fact a misnomer for physical distancing) was difficult to maintain in a country like India, especially with a booming population and congested urban spaces. Hence, the governments found out a way to maintain social distance by drawing chalk circles before the provision shops, ration shops and wherever there a possibility of people crowding. It is interesting to notice that the border line is not drawn as a square but as a circle. May be in the primitive imagination only circles and lines existed and the human beings later on invented other geometric shapes. So they use that primitive instinct to limit the movements. Devidas Agase, a Mumbai based artist picks out those circles from the street and brings them into his works. He documents the people’s activities in and around the circles with sympathy and cynicism alike. The multi-limbed figures in his works enact the normal human activities in and around the chalk circles that have by now left permanent marks on the pavements and roads each time reminding of the social distancing phenomenon though very few cares to practice it for their own sake. Agase do not lampoon them but registers the presence of the chalk circles in the contemporary history in his hallmark style.