When Janaky and Bhuvan Start to Paint: Art Sprouts in Captivity 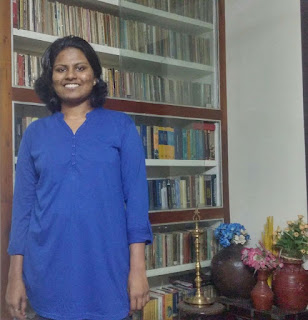 Captivity triggers creativity. Picasso once said, if they put him behind bars and prevented him from painting by depriving all kinds of mediums, he would lick the walls of the jail and make drawings out of his saliva. Some people know that they are gifted with the ability to sing, draw, paint, write poetry and even dance only when they find themselves in forced confinement. Best pieces of literature and history have taken birth in custody. On the one hand it gives enough space, time and tranquility to the writer to indulge in the art of writing and on the other hand, creativity of any kind takes material shape as a part of the effort to transcend the forced boundaries. Then it becomes a realization and rebellion at once. Realization it is but the rebellious side of it is noticed perhaps by the others only if the works created in captivity get a chance to see the light of the day. 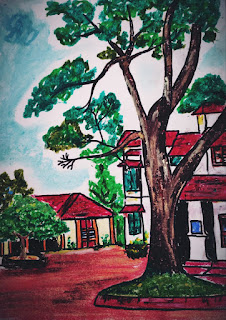 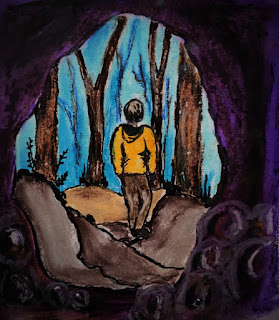 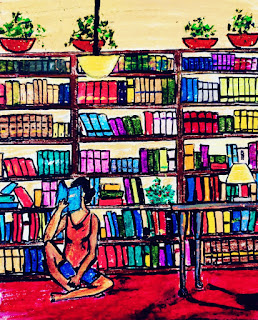 Janaky Sunil, a PhD scholar in Physics in an eminent institute in Bangaluru was at her home during the first phase of Covid lockdown in March, April and May 2020. Like everyone else, she too thought the days of confinement would be over sooner than later. She kept her educational routine unaffected and was secretly happy to have an extended holiday with her parents and brother who too had come back from Delhi where he pursued his graduate studies in History. Initial enthusiasm for holidays gave way to boredom and Janaki felt like doing something else than watching television, reading, experimenting with exotic recipes and chatting up with friends and parents in virtual and real space. It was when Janaky found a hidden talent in her; painting. Then it was an unexpected affair with lines, colors, ink, papers and whatnot. 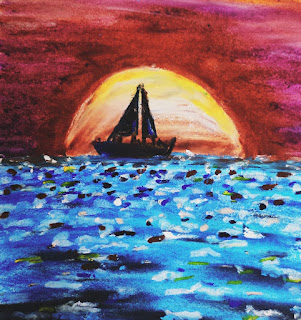 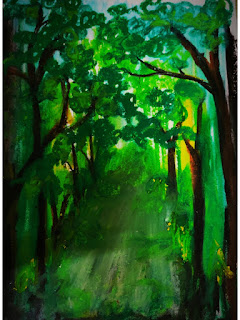 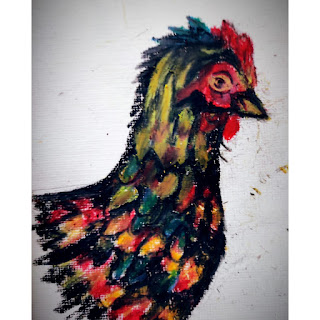 The paintings were growing in number and it was difficult to contain them inside the files and Janaky’s secret affair was about to be found out by her parents. It was a great surprise for her mother, Meena, who writes poems occasionally and sees them printed in magazines too. For her father, Sunil, whose identity I withhold for the time being, it came as a pleasant shock because in his busy schedule he had never noticed her artistic inclinations though he knew that she liked photography. For him the children getting attracted to academic pursuits in different areas of knowledge was a thing of pride though he did not particularly want them to follow his footsteps as a public intellectual, unparalleled orator and unrivalled Marxian scholar in Kerala, and an eminent professor of Malayalam literature. Well, now you have guessed his identity. Yes, Janaky’s dad is none other than Sunil P Ilayidom. 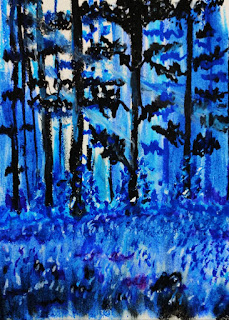 It wasn’t surprising for Janaki when her dotting parents, upon the relaxation of lockdown, went in search of drawing and painting materials and brought home all she wanted; papers, colors and brushes. Janaky’s paintings show a naïve style which is not deliberate. Considering her mature approach in the other academic field, the paintings are definitely naïve and childlike for it is the ‘withheld language’ of expression that she employs in her works and without the honing of it through formal fine art studies and practice. Sitting in confinement, all what she recollects are the images that had gone into her mind and heart during her growing up years. She has also painted images from her immediate past and present; in one of them she is seen sitting at a library and in another work, one could see a skyline that she has gathered in her memory during her travels in the metro cities. 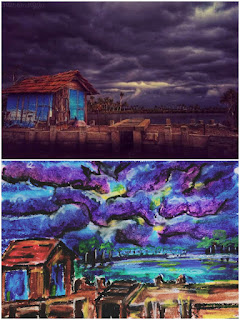 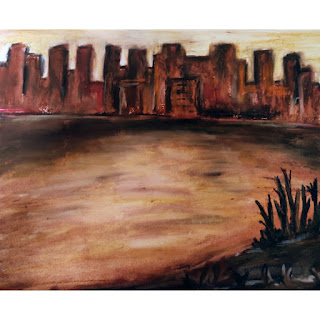 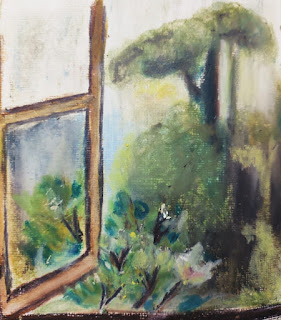 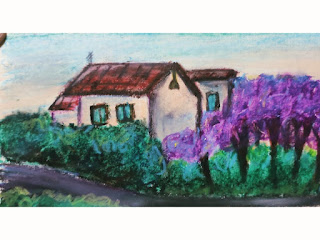 When the floodgates of memories are opened, the cascading images need a capturing medium which is the artistic language of Janaky. Though she had made some pictures and drawings during her early school days just like any other children of her age at that time, she had lost track of such visual language. So what one sees in her painterly expressions are the ‘recovering’ of an ancient language which once had currency in the private world of her childhood and perhaps does not have a transactional value in the present aesthetic economy. However, such a point of view does not discard or displace the relevance and the intrinsic value of her aesthetics which is absolutely truthful and deep, mainly because it comes out from a ‘lived’ and ‘living’ autobiographical narrative put into a ‘restored’ language. Janaky’s finding of her creative self as a visual artist in that sense has more complex layers than we expected to find in the apparent naïve style. For unravelling such complexities we need a body of work from Janaki done without the sense of confinement or lockdown in her. The evolution of language in both the phases, however minute it may be, could reveal the nuances of her works and the source of their origin than treating them as a hobby or distraction picked up during the days of lockdown. Let’s wait and see whether Janaky would go into making more paintings or not. 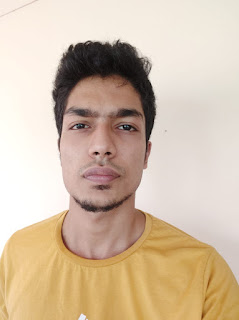 Vinu Abraham, the famous writer of novels, short stories and film scripts stands at par with Sunil P Ilayidom when it comes to the chance finding of visual creativity in his progeny during the days of lockdown. An outgoing type of person who spends a lot of time in listening to western contemporary music and thinks of becoming a music producer and arranger, Bhuvan Abraham Modayil suddenly found himself with brush and paint, confronting a wall. He kept aside his favorite sports such as football and badminton for a few days and kept working on the wall. A Commerce Graduate by education, by expectation Bhuvan must be painting some super flat image of a pop singer of his choice with bursting energy and inaudible sound. Instead he went into the making of an image that brought out a tender symbolic side in him, which again is filled with a primitive symbolism as we see in the Australian Aboriginal painters and the Gond Painters in India. 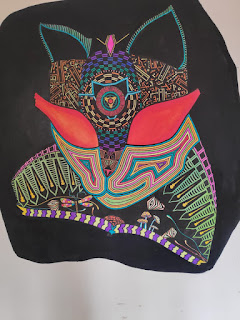 Bhuvan also used to paint as a child. When he grew up, he left it along the way and picked up all the other traits that would define him as a young man, definitely unlike his father, who spends many hours in a restaurant in Trivandrum, either reading or imagining scenarios for his forthcoming film or short story or novel, over many cups of tea. Vinu Abraham likes paintings but never tried his hand at one. Nor has he goaded his son to pick up brush to become a painter though his son becoming a painter would have definitely made him proud. But like a modern father, Vinu let Bhuvan have his way and was surprised to see the artist in him manifesting as a mural painter rather than a painter in a notepad or canvas. Bhuvan's mother Suja, an award winning documentary film maker made his life much easier as she created a conducive environment for the artist to flourish. The painting has some meaning for the young man. And obviously the onlooker also should see it. 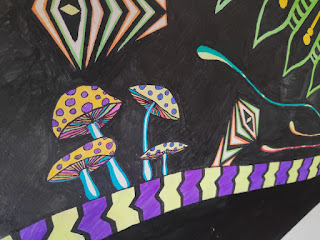 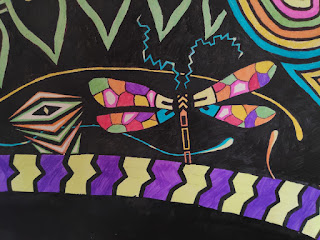 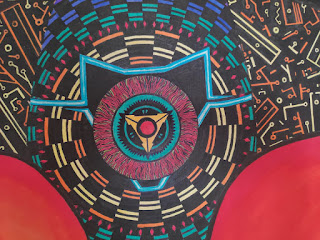 Through the aboriginal design and patterns, a cat masquerading as tiger or a tiger masquerading as a cat comes out with red eyes extending out of the contours of the face and a pair of ears jutting out of the top of the head. The curvy repetitive and colorful patterns give identifiable shapes to the frontal body of the beast whose head has an ornamental pattern that resembles a neo-tantric painting of Biren De. Also it has a pink pattern coming out of the head like a protruding crown. The tribal primitivism (that had come out of the erasure drawings of Rabindranath Tagore too) in a visual art sense has made the artist subconsciously turn the body of the tiger into a field (one could see that in Gond and Worli paintings) where a fantasy landscape is carefully painted. Bhuvan places the whole visual scenario against a black backdrop that generally in the primitive art practices manifest the unfathomable universe. 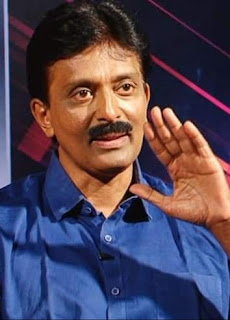 Forced confinement takes people to their origins. They travel through their genetic ladders and reach to the places that otherwise they never thought existed. The Covid lockdown has made people creative and imaginative. The lack of sociality and the unresolved predicament of lockdown have made people innovate mediums and modes to reach out to the people not only in their vicinity but also them around the world. Some act, some sing, some write poems and a need for books in that sense has also increased. This is the new normal in creativity. One does not need a formal training to be an artist. Nor does one need a gallery to exhibit. He/she may be painting secretly, but it would definitely reach other places through new modes of communication. Like Janaki and Bhuvan there must be so many young people painting while in confinement, expressing their hitherto unknown fears, passions, desires, anxieties and hopes.

(Sunil P Ilayidom and Vinu Abraham are two eminent personalities in the contemporary cultural scenario. They are my personal friends, a fact that gives me added pleasure to write about the creativity of their children. There must be so many young children in the world who have found out their artistic self while in confinement. I wish them all the best and hope to see those works at some point of time though that is too ambitious a thing to ask for.)