A Short Story on Love in the Times of Terror 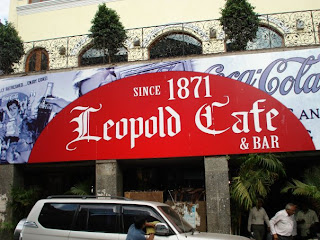 At Leopold, everyone knew them. If it is a Wednesday, they would be there at the third table on the right.

She came from the Prince of Wales Museum, where she went quite often to do her research on Ancient Indian Art. He came from Andheri West where he had hired a studio space. They met in front of the Regal Theatre. Then they walked hand in hand to Leopold and spent their Wednesday evenings there.

It has been on for almost a year now. I, former editor of a literary journal published from a South Indian city, living a self-imposed exile in Mumbai for the last two years, doing freelance editorial jobs for various publication houses, also have been frequenting Leopold ever since I landed up in Mumbai.

I remember the date and time of meeting them at Leopold for the first time. It was on 25th November, 2007 and the time was 6.50 pm. I remember the date because it was on that day I got the divorce notice from my wife. I remember the time because after reading the court notice once again, I had just looked up and my eyes fell on the huge wall clock at Leopold. It was showing 6.50 and I was gulping my second beer. Then I saw them walking in, hand in hand, she talking to him something and he nodding his head in approval.

They were sitting at a table, which was there in the middle of the bar. A few months before when the government imposed a smoking ban, they shifted to the third table, next to mine. They chose it because they found it easier to go out through rear door and light up their cigarettes there.

Occasional glances and smiles made us friends. My age, I am fifty two now, did not seem to be an obstacle for them to chat up with me. Later I understood why they could communicate with me so easily. Both of them were from the art field. She, a curator and researcher and he, an artist, had a lot of senior friends. And one day, after we became friends, they told me that in the art scene, age was not a factor. Senior and junior artists were all friends and they called each other by their first names.

As I was accustomed to the formalities of an office, where juniors called the seniors ‘sir’ or ‘madam’, I found them calling me by name a bit irritating in the beginning. Slowly I too grew up into their mode. I started enjoying it when they called me by my first name and told me about things that happened in the art scene.

I knew very little about art. I knew M.F.Husain, Picasso and some other names like Bhupen Khakkar, Gulam Muhammad Sheikh. I knew M.F.Husain because he was always there in the news for wrong reasons. Picasso was a ‘must-know’ for us, intellectuals. It was always good to know some artists’ names because you never knew when you would bump into people who were coming from the art scene. For party talks it was always good to have some general knowledge.

I knew Bhupen Khakkar and Sheikh because they were writers too. I had the chance to go through some of their writings (in translation) and I liked the writings of Bhupen Khakkar. People talked a lot about their paintings. I had tried then to see their works. I should confess that I liked their works though I did not know why I liked them.

After meeting this young couple, I felt some kind of self pity. I was here in this city with so much of art happenings, for almost two years and I never thought of visiting any art show. That is problem of the people like us, the literary kind of people, I mean. We never want to see anything happening beyond words, words and more words.

With them, I started going to exhibitions. I felt good in the crowd that did not know me at all and I did not know it either. This young couple had tried to introduce me to some artists. I met them, shook hands with them and forgot them. They too might have done the same thing with me.

However, all these while I used to look at this young couple; the way they conducted themselves in the crowd. The way they befriended people. The way they discussed works of art. The way they argued the good and bad of some works. The way they exchanged loving glances between each other when they were in others’ company.

As my divorce case was going on, I craved for these Wednesdays. I craved for this day because I could meet up with them at Leopold. Interestingly, we never shared the same table. I sat at my fourth table and they at their third table. I loved them. May be I wished if my youthful days were like the ones they had.

Today I curse myself for one of my bad habits. I neither carry a mobile phone nor do I take anybody’s number for keepsake. I adopted this habit like a revenge on my ex-wife (I cannot say she is my ex as the case is still going on in the court); a kind of sado-masochist pleasure, you could say. I left my phone and diary back home in South. I did not want anybody to call me.

With this couple I never felt the need to exchange the numbers or email id for it was sure that we would meet at Leopold on Wednesdays.

I curse myself today for my irrational habits.

I met them last on 19th November 2008. As usual it was a Wednesday. They came in hand in hand. They were talking something very serious and they waved at me. They sat at their table and continued their talk.

For the first time I looked at them so deeply. Deeply, the way I had never done before.

She was wearing a white shirt, elegantly designed, with one button opened from the top. A small white diamond hung from a thin golden chain and the diamond shone against her chest like a star. She was wearing a black jeans and was carrying a few books. Though she was carrying a bag made of cotton cloth, for some reason quite unknown to me, she was keeping the books in her hands. She smiled at me as I was looking at her. She had nice teeth like pearls. Her shoulder length hairs covered her face as if they were holding her face like a soft toy.

He was wearing a pair of blue jeans and a white T-shirt. It had an inscription on its back: ‘Apocalypse Now’. He was arguing with someone in the phone while she looked at him intently. Her eyes and cheeks reflected his anger, passion and aggression. After sometime he cut the phone and raised his right hand to touch her cheek. She blushed and lowered her eyes. What a sight it was! I had never seen her blushing like that. I felt a sudden surge of happiness in me.

They turned to me with a smile. They passed me that information. They were getting married. A simple court marriage on Monday. They told me that they would catch up with me on the next Wednesday same time here at Leopold. I blessed them.

I curse my bad habit of being adamant.

I got a mail from my advocate saying that I should be attending a hearing at a local court in Chennai. If I miss I would be in trouble. I had to fly out of Mumbai on Sunday itself.

I remember 26th November 2008 because that was the day, the court decided on the fate of my marriage. It was all over.

I was supposed to come back on the very next day to Mumbai. I called my travel agent on Wednesday night itself. But he told me something was wrong in Mumbai and I should be staying back in Chennai for good.

Did I see the word Leopold in television? Or was it my imagination?

Yes. Later on I confirmed that Leopold too was attacked.

Were they there on Wednesday evening? Did they wait for me? Are they safe now?

I curse my bad habit now. I hate myself like hell. Can anybody tell me what happen to them?

For the first time I am revealing my email id for the public. Please reach me at wisdomdawnslate@gmail.com
Posted by JohnyML at 4:48 PM