The Story of a Flute Player 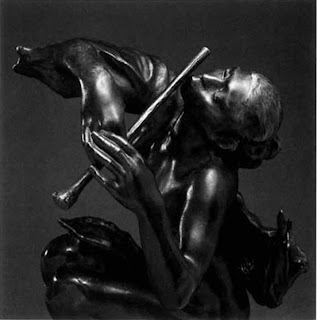 I think of writer’s block; a kind of mental state that cannot be chipped away by any intellectual chisel. It has to melt down on its own, leaving some stains of memories. Next time when you see the block growing in you again, you look at these stains and see how it had melted away once, slowly.

Don’t try to push it. Let it be. If you try to chip it off, it would show how powerful it is. One should let the things to be.

I meet this young man with a full beard and a wonderful smile on his face at Papanaasam beach in Varkala. Papanaasam means ‘the dispeller of sins’. I am there with the internationally acclaimed painter, Shibu Natesan, taking an interview, patching up differences and chewing good old memories.

I know this sea very well. I came here once to immerse the ashes of my father. Then I came here again to pray for his soul on a Karkidaka vavvu day. This day in the month of Karkidakam is considered to be auspicious as the souls of the deceased come to the sea shore in the form of crows. You go there and feed them with sacrificial rice cooked by the greedy priests.

It is a kind of pilgrimage. You walk to the seashore without the sandals on your feet. The small pebbles and shrubs along the way pinch your soles that are turned over-sensitive to the touch of earth. In each step you remember the souls that are waiting for you to feed them. The pain at your feet would tell you about the flimsiness of your life, your mortality.

Take a dip in the sea after feeding the crows/souls, you are relieved of your sins. You stand in wet clothes under a cloudy sky. The breeze passes though your wet body and you shiver. This sea takes away your sins. I have dipped here and there in river Ganges too. Both the times, immersing the ashes of my beloved people.

“Johny,” this man with a smile calls me. “I know you have not recognized me. But you know me well,” he says.

I shake hand with him with a sense of embarrassment for not recognizing him. Shibu speaks to him as he knows him well.

I observe this man keenly. His eyes attract me particularly. There is a deep calmness in them. He holds a two and half feel long black case in his left hand.

“Where have we met?” I ask myself while he talks to Shibu in a very friendly way. He refers to the name of a teacher who had taught me also in an education centre at Varkala almost twenty three years back. I look at him intently and now I could see the face of a young boy without beard, but with the same smile.

“I am Venugopal,” he says and he reminds me of our days in that parallel education centre. We used to be together participating in many cultural events. We used to sing together and he used to play flute.

The black case in Venugopal’s hand has a few flutes in it. He makes different kinds of flute and sells them to the foreign tourists who haunt the Papanaasam beach throughout the year. He gives flute lessons to the interested foreigners at the beach for a fee. And now he has got several accomplished disciples all over the world. He has been doing it, ever since he left the educational institute.

“I have been coming to this beach for the last twenty years,” Venugopal tells his story. “Initially I used to hang around here and play flute for the foreign visitors who paid me for entertaining them. Slowly some of them started taking interest in learning it. Now, I have ‘students’ from all over the world, some of them even come back every year only to continue with their lessons.”

Venugopal takes out one of his flutes and plays a piece of music for us. Shibu then takes one from Venu’s hands and tries his musical prowess at it.

“I have been trying to learn guitar for a long time,” I tell Venugopal in a confessional tone.

Venugopal looks at me with the same kind smile on his face. ‘You did not learn it till now?’ kind of question was on there in his eyes.

“Johny, the last time when we performed together, yes that was twenty three years back, you had said you wanted to learn guitar,” Venugopal teases me.

“Yes, I tried my hand at Tabla in between, but in vain,” I tell him as a sort of explanation.

“In trying lays all the problems,” Venugopal tells me. “When you try, you look for the result. Better let it be. You love playing flute, you need to know only the basics, the rest will happen to you as you play on. I never tried to learn flute. I liked flute and started playing with it and then everything happened. Don’t try things…just be with it,” Venugopal looks deeply into my eyes.

The wet breeze from the sea touches my face.

Venugopal is married and has a seven year old daughter, who sings extremely well. Whenever people invite, Venugopal travels with them to any part of India. Recently, he went to Himalayas with a North Indian painter, whom he met in the beaches of Papanaasam.

“How do you earn, if there are no students around?” I ask him. He smiles at me as if he was pointing out my incorrigible materialistic concerns.

“My wife is a school teacher and she brings bread home,” he says. And I am sure that Venugopal is not a parasite in his family as he makes flutes, teaches them to students and sells them to the interested parties.

Venugopal has played flute for many orchestra. But he finds his music at this seashore. “I am quite at home here,” he smiles.

He wears a pair of trousers and a shirt. He used to sport long hairs, which he cut recently. Once he was invited to join a famous music school in Kochi. He went there, gave interview. But the management wanted him to trim his beard, wear neck tie, tucked in shirt and shoes. Venugopal refused to go by the dress code and came back to his beloved beach. Later the school authorities requested him to join on his own conditions.

“I spent there two years,” says Venugopal. He left the school because he loved this beach so much.

“Are you happy?” Shibu asks.

“Yes, I am,” Venugopal says with no doubts or second thoughts about his happiness.

I feel his inner happiness because I find a man from my own past, who just doesn’t try, but just be there with things that he likes.

I learn this great lesson from Venugopal: Trying is one thing. But being ‘spiritually’ with anything/anyone you love is what makes you happy, creative and live.

I can see the stains left by the block in my mind now.
Posted by JohnyML at 2:18 PM