Angels on a Beach 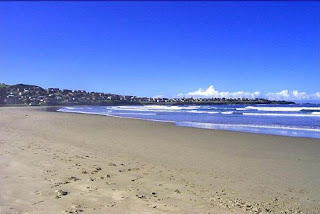 At 1 A M, Juhu Beach in Mumbai looks still busy. It is a Friday night and the week-weary folks are out in the streets to unwind.

The sea is calm though it tries to touches the feet of the people relaxing on the beach with its playful waves. They withdraw from the sandy edge of the beach, where a line of control is drawn with the garbage left by the revelers. From a distance, the line of rubbish look like a perfect girdle and the closer you go the better you see: GARBAGE.

My curator-collaborator, Anubhav Nath points at a hoarding erected out there by the city administration. It reads: ‘You Don’t Want to Keep it Clean. At Least Don’t Litter it More’.

There is no limit to littering in this city of dreams. Material waste looks like the wasted dreams of the angry people who sink their frustration in further littering. There seems to be no end to it.

Somu Desai leads our way. He is taking us to experience something new- ‘A life time experience,’ as he puts it. We are excited at this hour as the prospective meeting with ‘someone’ in the partly lit ends of the beach reserves and assures a lot of fun.

Our muscles are tensed and tired after a few hours of dancing at the dance floor of Joss, Kalaghoda, Mumbai, where we attended the 50th Birthday Bash of the noted artist Rekha Rodwittiya. A lot of DJ-yed Bollywood music and a lot of wishful pelvic gyrations.

‘Let us go for a massage on the beach,’ Somu suggests and it sounds soothing music to our ears as the Punjabisized DJ-ying had considerably damaged our sonic senses.

So we are here at the Juhu Beach.

I train my eyes to see the soothers. There, at a distance I see the silhouettes of some crouching creatures moving up and down in a vigorous way. Their movement is so funny but very rhythmic. Somu leads the way to the garden of those moving creatures.

As we move closer, I realize the actuality of these creatures. They are young boys crouching over people who are lying on their back or stomach, partly undressed. I watch them curiously. Their practiced hands move on the bodies of the people who have temporarily forgotten their worries by the magic of dancing finger tips.

Somu waits as if he knew someone of his liking would turn up. Finally, they, three of them appear from nowhere with their plastic holders with oils and creams. There is a bundle of cloth tucked away under their arms. I feel they came out of the sea as I could not figure out the origin of their sudden appearance.
‘Shall we start,” they ask in chorus and with quick movements of their feet they make three mounds of sand and spread the clothes over the mounds. The beach suddenly turns into a spa with these three makeshift beds. We surrender our bodies to these body magicians of the beach. Their fingers start moving on our bodies.

I look at the sky, which doesn’t seem to have too many stars tonight. The expanse of the ink blue sky comes over me as a dark soft weight that could smother the cries that I want to let out from my hearts. I listen to the rhythm board played by the waves and it is meditative. I let myself go.

A new world is created where unknown fingers move along the tired tracks of muscles. The skin becomes a landscape, unexplored virgin lands at least for this night. And the boys are the explorers of this new land, sometimes they caress, sometimes they plunder and ravage and sometimes they extract the essence out of the land. It should have been the extraction of essences otherwise, but it now feels quite rejuvenating.

Suddenly I feel this guilt of making someone just a set of finger tips. I feel like talking to the boy who is on me, incising my weary muscles to let the sap of tiredness flow out. I can see the silhouette of this boy moving over my body against the yellow halogen lamp at the extreme edge of the beach, where sleepless bees hum their flimsy life out.

“Where are you from?” I ask. I make myself sound quite dispassionate as I know my query could impinge on his privacy.

“We are from Agra,” he prefers to speak on behalf of all the boys in the beach who do the same job.

From Agra to Juhu. Is it a tradition? Yes, many young boys migrate to Mumbai to become professional masseurs. Akbar, that is his name, tells me about them. It is not a family tradition but a lucrative attraction. Migrating to Mumbai to become masseurs offers a lot of things, money, material and quick time fantasy satisfaction. Yes, they are very much in demand by the foreigners (both men and women), who do not want to get massaged on the dirty beaches of Juhu. These boys are taken to the hotels and if need be they give it a finishing touch with panache.

All their names show that they come from Muslim families. There is no rule like that. But one boy brings another one. The stories told back in the village around the night fire, nude bodies of white women, the smell and sound of the five star rooms create a fantasy world before them. They just don’t think about the bodies that are spread out in the littered beach of Juhu, in their glistening brown-ness. That is the reality of the nights, the litter of a tiring city and its ultimate loneliness.

These are the angels who fly over your body. They flap their wings over you, take you to a temporary world of ease and romance. The powdery sands of the beach murmur bed time stories into your ears. You loose into your world of non-existence.

I remember the girl who massaged me Bangkok. My friend asks me ‘was she beautiful?’.

I try to remember her face. Yes I do. Under the Air-Conditioner, inside the dimly lit parlour, she sits at my feet. I recline on the chair leaving the lower part of my body to be shaped back by her arty fingers.

She washes my feet, dries it with a soft towel. Then she puts oil on her palms and rub my sole, first softly, then with some amount of pressure and then vigorously. It is like a roller-coster ride. You want to tell her to stop it, but you are not able to. She takes you to the dizzying heights. Then she brings you down softly; a kind of bungee jump on a reclining chair.

She feels cold under the blowing AC. She covers herself with the towel. I look at her face. She cannot be called a beauty. She is an ordinary looking girl with a dark brown skin. Had she been a yellow skinned Thai national, would I have enjoyed better? Would it have satisfied some of my racial fantasies, which refuse to go despite the theoretical white washing?

I don’t know. I feel this girl as another angel, who comforts you with her feathery fingers. Perhaps, she asks you of your nationality and when you say ‘Indian’ she nods. I cannot decipher the meaning of her nodding. May be she see many Indians everyday exclusively coming for massage. She also might have seen several Indian artists, who come in Bangkok for ‘art camps’.

She massaged me when the art market was going up in full momentum. And I felt the euphoria blooming in my veins like a show of fireworks.

The boys in Juhu beach boys massage me when the art market has taken a nose dive along with the global market meltdown. The whole day, myself, Anubhav and Somu were discussing art market recession with so many people. Not because that we wanted to do so but wherever we went we were drawn to such talks.

We all need a massage now, a few moments of relaxation and abandon.

Juhu is just right here, at the heart of the art hub of India, Mumbai. And the boys are there.

With their limited accessories, they look totally powerless. But when they perform, they conjure up worlds that we have forgotten to see during the market boom.

It is time to go back and listen to the sea telling the truth of time, winds carrying the philosophy of resignation, sands murmuring the words of earth.

The angels fly away and I believe they flew back to the sudden darkness of the sea, from where they came to us.
I drag my soothed legs along the sand and I lag much behind the towering figures of Somu and Anubhav.

Then someone told me in my ear, “Go and Spread the word. It is not the time of doom. Have faith. The Angels are Here.”
Posted by JohnyML at 11:22 AM