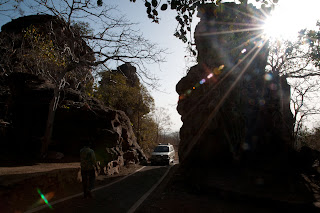 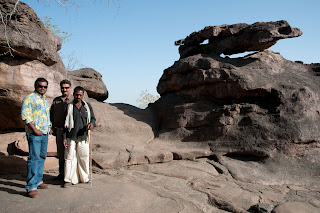 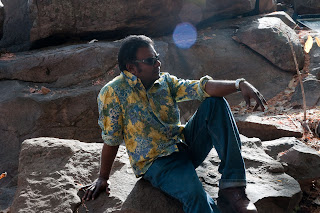 We say good bye to Bhopal early in the morning. Our next destination is Nagpur. Halim had told us in the previous night that the Bhimbedka caves come on the way to Nagpur. We take the Hoshangabad route and head towards Nagpur. On the way Chintwara comes. I have an association with Chintwara and Nagpur though I have never been to these places before. Mrinal, then girl friend and later wife, had travelled from Chintwara to Nagpur to catch a train to Kerala. She was coming to my house for the first time and I was all tensed up then. I remember waiting at the Kollam Railway station to receive her. She came alone and there were no mobile phones in use at that time.

I look wistfully at the signboards along the national highway. The morning sun runs along with us in the right. I look at the sun. Certain kind of warmth embraces all of us. We talk about the people who worship sun. Feroze mentions those people who come to a park in Kochi, where he goes for his morning walk. These people sit looking at the morning sun and absorb energy from it. The soft rays of the morning sun energize you. Whether you believe in religious rituals or not sun rays enhance your energy level.

We are still undecided about visiting the Bhimbedka caves that comes after twenty four kilo meters from Bhopal. But once we see the signboard of the road that leads to the Bhimbedka caves, we decide to visit the caves. We need to take a right diversion from the national highway and drive for three kilometres to reach the cave site. Between this road and the side way from the national highway there is a level cross. Railroad workers have camped there. They have already started their work. The level cross gate is closed for the passing of a train. Somu and Feroze get out of the car with their cameras to click some pictures. Railway workers pose for them and the children perched on the shoulders of their fathers look at the cameras curiously. I feel sad for a moment. I don’t like to see children suffering.

I mention my private pain regarding the kids to Feroze. And also I mention how the world is full of injustice. “Look, we are in a trip. Back home our children are happy and safe. But look at these kids. They are struggling along with their parents,” I tell Feroze.

A train thunders past before us. Our car shakes for a moment with the brutal force of the train. We are now in the way to Bhimbedka caves. Almost a kilometre before the caves a cross bar stops us. It is a check post and nobody is seen around. A lonely dog comes limping towards us. Then we see a boy coming to us. He tells us that the official would be coming in any moment to open the gate. We wait for him and finally he makes his grand appearance on a bicycle. We pay for the ticket and head towards the caves.

It is eight thirty in the morning. The caves are under the care of the Archaeological Survey of India. However, the local administration is done by the Forest Department. They have laid a neat asphalt road to the caves. At the end of road there is a large parking space. We park the car and walk towards a narrow passage that goes between two towering rocks. At the end of the pathway, to our shock we find a shiva temple. A priest sits there and makes rotis. His side kick moves around and performs some chores. On the right side, in a deep cave there is a neat bed room and veranda. Just below it there is a stable that houses around thirty cows. The cows look at us dispassionately.

We feel like cheated. The caves have now become a temple, we think. We ask the sidekick for details. He tells us that we need to walk for half an hour to see the caves. We don’t have much time to spare. We have to reach Nagpur by afternoon. We have to cut around three hundred and twenty kilometres in five hours to catch up with the people who are waiting for us in Nagpur.

With some kind of desperation we drive back and suddenly we see a few people sitting on the right side of the road. And on the right side there are two vertical rocks that carry fading signboards made of bronze plaques. Now we know where the caves are. We decide to take a quick walk around and feel the caves. As we walk towards the caves, a young man carrying a stick joins us without asking. He is a guide and he does not demand any money.

“The official guide comes around ten o clock in the morning. I thought I would accompany you as you have come all the way to see the caves,” he says. We are happy to have him with us.

Bhimbedka caves are around ten thousand years old. They belong to the mesolith age. There are around seven hundred caves in this site. Out of this four hundred are taken care of by the Archaeological Survey of India. And ten caves are near the pathway. They are opened for the public. The other caves are in the inner forest and the public is prohibited from venturing into the forest.

“There are bears in the forest,” the guide tells us. His name is Radhe Shyam and he tells me that he is thirty to thirty five years old. I smile at him. He is not sure of his age. He belongs to the next village. Now he works as a guide in the site. His parents had worked at the cave site during the excavation was on. When he grew up he joined the local workforce, which was drawn by the ASI. Now he is an unofficial guide here.

These caves were discovered by Dr.Wakankar in 1957-58. He made extensive researches in this region and proved that these caves were ten thousand to three thousand years old. Then it was taken over by the ASI. The caves have pictures painted on the interiors that almost resemble Altamira cave paintings in Spain.

Radhe Shyam has a story to tell us about the caves: Dr.Wakankar was travelling in a train and from the windows of the train he saw the rocks at a distance. He was very curious to know about these caves. He got down at the Hoshangabad railway station and somehow reached the Bhimbedka site. He collected some local villagers and made an expedition to the deep forest. The villagers were sceptical about Dr.Wakankar’s act. But they followed him. Finally they reached the top of the hill and there they found a sage sitting alone in a cave. (That cave is the present Shiva Temple). With the help and direction of the sage, Dr.Wakankar found out all the caves.

“I was a child when the excavation started. My parents worked with Wakankar saab. Later I worked for the ASI here,” he says. He shows us the caves one by one. Feroze clicks photographs. We snatch time and pose for some special photographs. Feroze clicks a picture of Radhe Shyam along with me and Somu. I like that picture.

We try to feel the caves. We try to imagine how the primitive men lived here. Radhe Shayam reminds us how these caves were naturally formed thanks to the work of wind and water. “Once upon a time this place was under water. Then the water started receding with a great force paving way to the formation of these caves,” Radhe Shyam explains.

We don’t know whether it is true or not. But we think of the immensity of the water that once covered this area. A sudden fear grips me only to be relieved by the mirth making efforts of Somu and Feroze.

I look at Radhe Shyam’s face from behind my coloured goggles. No special emotion is seen on his face. He must be seeing a lot of people like us every day, I tell myself. “Thousands of people come here everyday. In summers visitors are very less. But people like to come here during the rainy season. This place looks really fantastic during the rainy days,” says Radhe Shyam as if he had read my thoughts.

We say good bye to Radhe Shyam and to the caves. We pay him some money. He is very happy. Other guides jealously look at him.

While driving down the hill, I think of Mrs.Wakankar. Her husband was here once and he opened up this place for the world.

I look out of the car window and fancy that I see a young Dr.Wakankar and Mrs.Wakankar walking hand in hand in the valley.
Posted by JohnyML at 12:37 AM