Fauji Daaba and a Flat Tyre 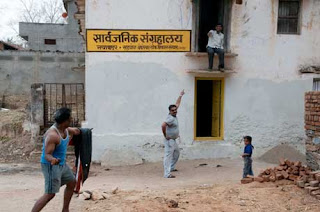 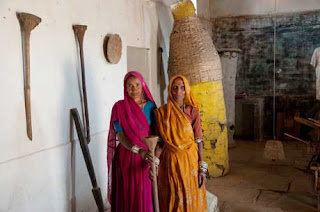 Lesson one: When you are on the road, dont drink too much at night. In Partapur we had a good party with the visiting artists and I had drunk quite well. Hence, yesterday morning I got up with a heavy head. Then and there, I decided I am not going to drink during the travel. Let me see whether I would be able to stick to my decision.

It was time to say good bye to Partapur. We had an important place to visit there: The Living Museum. So we go there accompanied by a friend from Sandarbh. Somu asks him not to tell the directions so that he could recollect the way for himself. We reach there and I too remember the place very well as I had gone there coulple of times before.

Living Museum is a concept developed by Chintan Upadhyay. A small village, almost a kilometer away from the Partapur main market, is where the Living Musuem is located. The word ‘museum’ might give you certain ideas about the building and location. But this does not have anything to do with those common notions. It is a double storied shack formerly used as a village community centre and at times it doubled up as a classroom. It was lying abandoned for long time and when Sandarbh started in Partapur, Chintan decided to activate this abandoned space.

This museum has got a lot of house hold utensils and other living tools. These are the actual tools used by the poor villagers who eke out their daily sustenance from farming and cattle rearing. They all wear minimum clothes and work throughout the day in farms and dairies. A couple of buffaloes respond to our arrival with a harsh sort of mooing. Skimply clad women look at us with some kind of amusement in their eyes. The Sandarbh boy who accompanies us opens the doors of the museum for us.

Living Museum functions in an interesting way. People can keep their traditional and living tools and utensils here as in a museum display. Whenever they want to use these tools they can take it away. Once the work is done they bring it back to the museum. However, what you see are the old and rusted tools, which have interesting shapes and structures. Many of them have gone out of use thanks to the change of pattern in life. While seeing them one can connect to a time when these tools were really used for carrying out daily chores.

We have become too much depended on the modern technology. We have almost become slave to these gadgets. If the mobile phones show poor connectivity we get disturbed. I am supposed to write a blog. We come back to the Sandarbh office. I open one of the lap tops we are carrying and suddenly its display is scrambled. I dont feel challenged as we have a master lap top with us with the latest softwares. It belongs to Feroze. We call it Pentagon and the other computer FBI.

Feroze opens the Pentagon computer for me and suddenly it crashes. Virus? Feroze is suddenly gloomy. He calls up his son and takes a few tips from him. This 19 years old young engineering student is a computer wizard. He can fix any modern gadgets just by looking at it. He has an eye for technology.

Some people are like that. They can fix the machines easily. Bhavin Mistry is a young artist friend and he can fix computers using any available tools. Recently he repaired a computer using one small kitchen knife as his sole tool! I am not a technical person at all. For me computer is ‘Microsoft Word’ and internet. Anything goes wrong, I call the lifeline numbers. While Feroze fixes the computer, I remember A.J.Cronin’s essay titled ‘Overhauling’. Some people keep overhauling their gadgets all the time. Give them a cycle, they will overhaul that also.

I finish my blog in Feroze’s computer, which is ready by now. After lunch we leave Partapur and drive towards Ujjain. On the way we visit two acres of land recently acquired by Sandarbh near Partapur. Sandarbh is planning to start its permanent residency programs here. Will it go against the founding ideals of Sandarbh, I wonder. Sandarbh is all about moving. But one cannot be a rolling stone all the time. Sandarbh too needs its permanent headquarters.

Landscapes change around us. Inside the airconditioned car we dont feel the heat outside. In central India, it is already summer, though the early mornings and evenings are cold. The rural Rajasthan landscape is predominantly brown in color. The sky is sharp blue today. It soothes the eyes. It has the freshness of a teenager. The rigor and vigor will increase as the summer months would progress in the coming days. I look at the changing colors of landscapes. Somu drives and Feroze takes a nap at the backseat.

In Gujarat we experienced the quality of roads. Throughout Gujarat roads are in a good condition. The public transport system is more or less good. May be that is the reason why many people want Narendra Modi as the Prime Minister of India. Recently someone commented that India need Naredra Modi as Prime Minister and central government should be led by the Congress Party! People are so desparate as they are caught between vying ideologies and their innate demands for progress and development.

As we enter Rajasthan, the roads change in quality and complexion. Pot holes appear in regular intervals. Palak Raval, who was with us during the first day had proudly commented on the quality of the Gujarat Roads. “Roads tell you where you are,” she had said.

That is true in a way. As we enter Madhya Pradesh, suddenly we find our vehicles running on a rough path. Optimism is the best tool when you are on the road. We hope for this bad patch to finish and get into a better road. But better roads never seem to come. Tossed and bumped inside the car we feel like pieces of fruits in a juice machine. Some kind of alertness come back to us.

For the last few days we have been eating vegetarian food. Suddenly I tell that we should eat some non-vegetarian food today. Somu is not a non-veg person. But he too wants to eat some egg today. So we wistfully look for some restaurants or dabas that sell non-veg food. Most of the wayside restaurants in Madhya Pradesh do not sell non-veg food. Finally we find one person standing with a few trayes of eggs and a stove.

We approach him and ask for omlets or scrambled egg. He smiles.

“I sell only boiled eggs,” he says.

“Go two kilometers from here and you find ‘Fauji’ daaba. There you get non-veg stuff,” one boy who sits on his cycle carrier lazily tells us. He almost sounds dismissive. He does not like our presence there.

Fauji Daaba, suddenly the sign board appears on our right side and we feel as if we had found an oasis. Fauji in Hindi means soldier. Soldiers are supposedly eating non-veg. We are happy for the oasis, which eventually turns out to be an oasis. It is just a mirage. This fauji who doubles himself up as the cook and cashier tells us that he does not serve non-veg food. Finally we settle for the usual vegetarian food.

Fauji looks really a soldier in his well built body and crew cut. He has a straight moustache. And his voice has a commanding power. Even when he spells out the menu for us, he relives his parade ground days. He shouts the names of the items. We order our food. We feel that we have a strong appetite at that moment and order for larger portions.

If someone wants to know about the food, this is what we order, Dum Aaloo (two plates), Dal Tadka (two plates), Bhindi (two plates), salads (two plates) and tandoori rotis. Once he gets the order the Fauji gets into action. He moves fast as if he were moving through trechnes and enemy terrains at the border. Soon the place is filled with different kinds of aromas.

The cool breeze touches us. We hold ourselves together. I lie down on the charpoy and look at the starry sky. I look for some constellations up there. But the sky suddenly looks like a modern gadget. I dont understand anything. I leave my effort.

The tandoor is ready and the stove started glowing. We go close to it and feel the warmth. On the other end, we find a television playing the Zee TV Sa Re Ga Ma program. Fauji’s family members, a wife and a daughter sit on the floor and watch the TV. We too watch the TV for a while. Sonu Nigam and Suresh Wadkar speak to the competing kids with compassion. Canned laughter and canned tears jerk out of the television.

Finally food comes. We think that we can eat a lot. But we dont eat. The appetite has gone. We eat the food in silence. Each of us has withdrawn to the private world.

Ujjain is forty five kilometers from here. After food we are considerably energized. Somu reves up the engine and we jump into the car. We leave Fauji behind.

We are now very close to Ujjain. A huge archway with sign boards and directions welcome us. We read out the distances loudly. Suddenly our car shakes and shivers. It is ten at night.

Yes, we get a flat tyre. The rear left tyre is punctured. The car wobbles and comes to a halt. Right in front of us there is a check post. Huge trucks queue up to get an entry into the city. Only by 11 o clock they are allowed to enter.

We dont feel challenged. We take out the tools and start working towards changing the tyre. We put the jack under the car and lifts it. Suddenly the jack fails and the car comes down with a thud.

I walk into the night and look for a puncture fixing guy and luckily finds one near the check post. He is reluctant to walk a few meters to our car. I request him to come along. Finally he relents. After two hours of harrowing struggle (thanks to the complicated structure of our car) we get our tyre fixed. The young man who helped us do not charge us too much. The tube has got four holes in it thanks to the usual suspect, a sharp nail. Nails are the worst enemy a traveler can confront when he is on the road.

Exhausted by now we somehow want to reach a hotel. Finally we get a decent hotel and we fall down on the beds.

Before sleeping I think of this temple town. I have been here before. I had visited the Mahakala temple, one of the most famous Shiva shrines in India, with Mrinal, long back.

With some sense of happiness and contentment we sleep.

PS: While driving towards Ujjain, I came up with this idea of making a short film once we reach in Bastar. I conjured up a story quickly. It is going to be a very simple moive. One man comes to visit Bastar. Another person starts following him. Or he thinks that he is stalked by somebody. The film is about of stacking and surveillance. I am sure it is going to be an interesting experience.
Posted by JohnyML at 10:36 AM

Thank you for sharing this information. read me article
A Famous Computer Virus