A Crumbling Institution thanks to Neglect 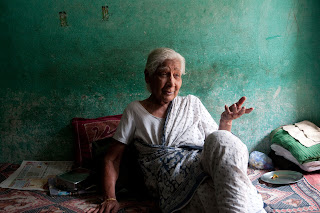 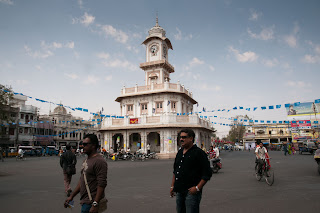 At the age of 81, Mrs.Wakankar looks alert. Her body is fragile as the old photographs framed and arranged on the decoloured walls. But her mind is very alert. She has some difficulty in speaking and you need to sharpen your ears to listen to what she is talking. She welcomes us to her humble room. Against the blaring sounds of brass bands down there in the street, we tell her why we are in Ujjain.


Almost eight years back I had come to this place, Dr.Wakankar Sodh Sansthan (Wakankar Research Institute), a three floor building near the heart of the Ujjain city. The landmark is a decorated clock tower building and the place is known as ‘Tower’. The clock shows seven o clock and we are standing before it at 12.30. The city administration seems to have no interest in preserving its heritage. Life goes on around it without heeding to the plaints of an ailing clock. May be people like us only would notice it as we are strangers to the city. Some one tells us about a petrol pump, which is next to the research institute. But the petrol pump turns out to be as unnoticeable a thing as a pan shop. It has two small vending machines; one for the petrol and the other for diesel. No big vehicle can fill gas from here. Feroze likes it and he clicks his camera away to bliss.


First time when I visited this research institute with my wife Mrinal Kulkarni and her brother Manoj Kulkarni, Mrs.Wakankar was looking healthier. Time has ploughed through her body by now. Mrinal and Manoj had studied painting under Dr.Wakankar, when they were kids. Now as we are here, I remind Mrs.Wakankar whom everyone calls ‘Vehni’ (elder sister in law) or ‘Thai’ (elder sister in Marathi), about my former visit. She smiles at me and wonders how we three, me from Delhi, Somu from Vapi and Feroze from Kochi got together to conduct a tour like this. Now it is our turn to smile at her. She is motherly and benevolent.


The discoloured walls of her two room apartment on the left side of the first floor of the Dr.Wakankar Research Institute tells us the story of the neglect that she faces for the last few years. Dr.Wakankar Research Institute was the dream of Dr.Wakankar, one of the most daring archaeologists and art history researchers in India. He found the Bhimdedka caves in Madhya Pradesh. Being a strong RSS follower, he was not supported by the central or state government, which were mostly headed by the Congress leaders. Against all odds Dr.Wakankar worked towards his goal. He became a part of the Vikram University and set up a museum of his findings there. He worked with the Oriental Research Institute of India for several years.


Dr.Wakankar’s intention was to set up a full fledged research institute in Ujjain and he was successful in establishing the centre in the middle of the city. Late Prime Minister Indira Gandhi had asked Dr.Wakankar to shift his loyalties, which he refused to do. She was reluctant to acknowledge his services. However, the Congress government had to confer him with Padmashree during 1980s. He passed way in 1988.


The decline of the research institute started in 1990s. The institute now houses the research materials of the late scholar is opened for the scholars who do research in the concerned areas. One of the family members mans the institute, which is losing its attraction fast. There must be reasons for this decline. The Wakankar estate is now family property and with no one to heir this adequately and professionally, it has just reduced to a lucrative real estate. Mrs.Wakankar is the last woman standing to protect the legacy of her late husband. But once she fades from the scene, there are all the possibilities that this golden treasury of research materials going into wrong hands. The neglect that the building faces is out of the lack of interest from the decision making people. Mrs.Wakankar says that she gets no grant from the government or from the university for which her late husband had worked selflessly.


Mrs.Wakankar, however is not desperate. She does not lose her grace while discussing the matter with us. This former Magistrate of the Juvenile Justice court knows how to deal with the situation. But she does not have the energy to fight with the establishments and deaf bureaucracy any more. So she leaves it there. But she is sad for one reason. Dr.Wakankar, a pure Spartan in his life style, used to impart art education to the young people in Ujjain. He taught many youngsters who later became accomplished artists and scholars. Mrs.Wakankar feels sad for the disinterestedness shown by the ex-students of Dr.Wakankar. She had treated all of them like her own children. But now the mother in distress is not attended by any of her famous kids.


The institute was flourishing as an art training centre during 1970s and 80s. Everyone in North India knew about this art training institute. The students from this institute were allowed to sit for state level examinations that gave them diplomas. These diplomas were sufficient enough to get a job or a get an admission for higher studies. Self less people gave their services to the institute by contributing in several ways. But with Dr.Wakankar’s death things changed considerably. Mrs.Waknakar feels that the government should now take care of the institute.


“I don’t complain. But nobody helps. May be people have lost interest in this institute,” Mrs.Wakankar says. But that is not true. People still take interest in this institute. Some parents in Ujjain send their children to study painting in this institute. But their attendance is sparse and irregular. There is no regular teaching system either. One huge institution is withering away here and nobody would like to look at this side. Mrs.Wakankar at the dusk of her life looks at us and tells us to go and visit Vikram University Museum, which her husband set up. “I don’t know they are interested to show it to anybody or not. But if you insist they would,” she says.


While saying good bye, I bend down and touch her feet. She blesses me. Feroze trains his camera at one of the pictures of Dr.Wakankar framed and kept their on the wall. Mrs. Wakankar comes to him and asks, “how do you three guys from different parts moving together?”


Feroze smiles and clicks a beautiful picture of this grand old lady.


Later we visit Kalidas Akademy. Ashok Vajpayee, who now heads the national lalit kala academy was the person behind the establishment of this institution. Supported by Madhya Pradesh government, things look smooth here. R.P.Sharma, the exhibition co-ordinator talks to us and informs us that the Akademy is not interested in modern art as its focus is on crafts and tradition. We see several sculptures and paintings done by traditional artists in and around the building. Some are in the neo-classical academic style. That has become a part of our art tradition!


We start our drive towards Indore by evening. We reach Indore by six thirty. We move around the city, negotiating the traffic which is in snail’s pace. We look for a decent accommodation in one of the hotels. But all the hotels are full as the marriage season is on. Some hotels offer accommodation but they want us to check out at 9 am. That is strange. Twelve o clock is the usual checking out time in all the cities. But in Indore it is different they say. That is really funny.


We drive to the outskirts and find a so so hotel, which has a big rooms and a lot of power plugs. We are happy and but to our dismay we find only one plug is functional out the many. But we don’t have any other option. We have a light dinner and we sleep in no time.


Our next stop is Dhar district.


PS: Looking at Feroze in the morning is very interesting. He keeps working on his computer or camera. If not he is looking at his mobile and finding new properties and features of it. Feroze is a ‘mobile workshop’, I comment. Then Feroze tells me the story of another photographer who always repairs things. This man one day invited his friend for a photo shoot together. They were supposed to go on his motor bike. When the friend arrived, he found two wheels and a skeletal frame of the bike. Rest of the bike was in two iron vessels. But the friend told him that the bike would be ready within ten minutes. And to the friend’s surprise, the man fixed his bike in ten minutes by assembling all what was scrambled up in the two vessels to the skeletal frame. And they did go for the shoot on the appointed time.
Posted by JohnyML at 11:32 AM

Hotel clarks amer is a one of luxury and harritage hotel in jaipur, Rajaasthan in india.www.hotelclarks.com