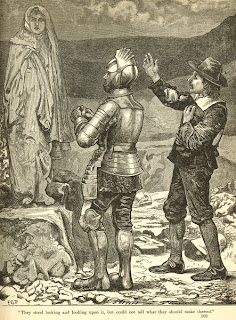 We sat together in silence- an artist and a critic, who are just reduced into mere friends. Paraphernalia falls when silence creeps in between two professionals. Then they become friends. They become pilgrims.

From the windows of a climate controlled car, the Vidhya Mountain ranges looked like different animals.

My friend smiled. “Concentrate and look into your heart. I can see several untamed animals there. We are on a pilgrimage, friend. I want to kill the animals around you and the ones inside you,” he said.

It is like that. When a friend tells you that he wants to decimate all the evil forces that curb you in your work and life, suddenly you start believing his words.

“You may not believe in all these. But I want you to come with me,” he had told me month back.

He sounded like a shaman. And he did not know that I always believed in shamans and their powers to heal.

I was wounded and I desperately wanted to be healed.

I had laughed into the phone. “I believe in what you say and I am ready to come with you.”

Once again silence filled inside the car. I looked at my friend’s face. Anxiety had ploughed several channels on his forehead.

“You know something?” he asked. I nodded negatively. “I am afraid of traveling with you in this speeding car,” he said.

Was he taking a risk while saving me from the evil forces? Were my spiritual enemies so strong that they could finish me off at anytime?

“Anytime….” He repeated my word and went back to silence.

I remembered a story that he had told me before we set out for the pilgrimage.

“Look at this watch,” he showed me his wrist watch with a white dial and golden letters. “I have two of them with me now. One day I was visiting a friend at his home. We had dinner and my kids were insisting to go back home. I looked at my watch and told my friend that it was too late and needed to go back. Once again I looked at my wrist and confirmed the time. My friend commented that I had a nice watch.

“I came back home and while getting out of the car looked at the watch again. But the watch was missing. A chill passed through my spine. I couldn’t have lost it on the way because I was always in the car. I asked my kids and driver to search for it. Even the driver told me that it was there at my wrist when I entered the car. But now it was gone! Next morning I went to a mall in the city and bought another watch of the same make. But something was telling me from my inside that the other watch is somewhere.”

I thought he was going to tell me that the watch he bought from the mall turned out to be the same that he had lost a night before.

“No…it was a new one. Absolutely new. I came back home. Next morning, I told my wife that I feel the presence of the other watch somewhere in the house. Together we started searching for it everywhere. Finally….you don’t believe….I found the watch on the top of a shelf in my bedroom. How did it get there? I was wearing it in my hand when I was at my friend’s place.”

I heard it in silence. I thought he would explain the mystery further. But he did not. I too thought of not prodding him on that too much. But the mystery haunted me because I believed in mysteries always.

Car rushed through the darkness. I could not listen to the familiar sounds of early morning birds. But I knew they were somewhere there.

“From here we start our walk,” he said.

I got out of the car. Opened by bag and took out a saffron dhoti, which I had brought along. People were already on their way to the temple, which was almost seven kilometers away from the main road.

Nobody was giving any attention to us. I leaned against the car, removed my jeans and wore dhoti. He too did the same. Later we joined the procession of people.

The temple is well known. People go there by foot and offer coconuts, which the priests would break before a small idol. Each coconut is a symbol of obstacles posed to the devotees’ lives by their enemies. As the priest breaks the coconut by calling out your name, you feel that particular obstacle breaks into pieces, letting you free of its clutches.

My friend handed over a bag full of coconuts to me. “Hold it with prayers in your heart,” he ordered. I looked at his face. It was shining like molten bronze. I could not recognize my friend there. He was someone else; a shaman.

We walked. I was feeling tired but I treaded along. He walked fast without saying anything to me. The weight of the coconuts was burdening me down. I wanted to sit. The rage in his eyes however made me to drag my feet along. I was like a reluctant child but full fear for his vengeful father.

There in the temple, we joined a long queue of devotees. It was not moving. I sat down there on the floor. I lied down on the earth. I sobbed.

I didn’t have any clue of time. But I was standing before the idol and thousands of people were thronging around me. My friend was mumbling something under his lips. He folded his hands in reverence and his eyes were blood red. He took the coconut bag from me and handed over to the priest.

“For the enemies, for the house, for the welfare of family, for the vehicle, for the…..” the priest chanted while breaking the coconut one by one and calling out my name.

Something broke inside me. A warm fluid started filling in me. I felt empowered. I wanted to hold the hands of my friend. But he was not there!

I looked around and silent screams started ejecting out of my mouth. I could hear myself weeping on the granite floor of the temple. Someone was lifting me up.

“This painting was really troubling me a lot. Now I find it is a resolved painting. It took me three months to finish,” my friend said.

I looked around. I was in his studio. I looked for my soiled clothes. But I was wearing the same jeans, which I had removed behind the car. I looked for the coconuts in vain.

“Tell me something about this painting,” he said. “By the way, before that, I have something for you,” he continued while getting up and walking towards the table on the right corner of his studio.

He pushed a piece of coconut and sandal paste covered in a plantain leaf into my hands. “It is for you. I have been keeping it since I went to that temple with my family.”

“But, I thought you were with me,” I muttered in bewilderment.

“Yes, I too thought so…but that time you were in Ahmedabad. We even had a telephonic chat, don’t you remember?” he smiled.

With shivering hands I put the blessed offerings into my bag and got up to go.

He waved me good bye. I turned back and saw none there.

I was in a car and on my left side the Vindhya Mountain ranges no longer looked like animals. They were just hills covered in greenery.
Posted by JohnyML at 11:34 AM