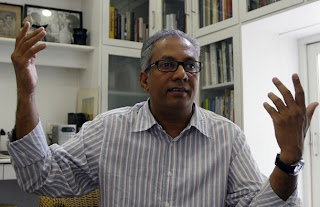 When Atul Dodiya speaks, trees do not fall. But egos do fall because….

…because his words have a sort of directness that cuts down the core of hypocrisy.

It was a sort of confession by the artist before an interested audience. Perhaps, an auto- introspection, a soliloquy as magnificent as that of great heroes.

Soliloquy involves a lot of self critiquing. It is the poetry of skepticism. But through self-doubts, aphorisms of life are revealed. When life speaks itself, taking incidents (here works of art) as points of reference, there occurs poetry.

And Atul Dodiya believes in poetry and poets. For him ‘poet’ is a generic term, sort of emblematic of all those who ‘create’ fearlessly.

While elucidating the meaning and myth of a series of watercolors, Atul came to one particular work, where a man was seen peeing on the ground, with only a skull as the witness. He called it ‘Poet’.

“Poets are those people who just don’t care about the opinionated people. They pee fearlessly,” he says.

An image of a skull makes a lot of difference to poetry/creative works. Soliloquies generally have skulls as audience; from our own Raja Harischandra to their Hamlet. Our Subodh Gupta to their Damien Hirst.

Ram Kinker Baij made a few maquettes of Mahatma Gandhi (studies for a monumental sculpture, which never took off thanks to the quota/permit system prevailed for obtaining cement during his days!) and Gandhiji was shown stepping on a skull.

Memento Mori- the reminder of death. The transience of life. The philosopher’s smile at life’s vanities.

Atul Dodiya smiles through the skeletal imagery, even before skeleton became an international fad in art. Look at his Man with Chakki and the Sabari Series- what you see are the skeletons of the protagonists.

In the shutter work that shows the image of Goddess Laxmi, you see the three Kanpur girls hanging from the ceiling. Behind the imagined richness of our popular narratives, there hangs death, often a violent one.

Atul Dodiya does not shy away from the imagery of death. The poignant notifications of death comes in the image of his suffering sister, first as a lonely girl in the balcony, then as a hospital bed embellished by carpenter’s tools. Then in the image of his father. He moves from authority to death.

“A spleen disease. A lot of protein rich fluid sucked out of his belly every week,” Atul Dodiya says.

Atul Dodiya links up death with humor. For him both are healers, having shamanic qualities. He forces humor down to the bowels making his protagonists to defecate on the map of a nation.

Hence, in his works, Atul tries to exorcise the happy ghosts. He secretly loves them and beckons them back once they are chased away.

Atul loves to reiterate the authority of painting through his painterly practice and says that I am a painter.

He says with style and panache; through the images of Gerard Richter painting (remember Krichner’s famous painting of an artist with the brush, the phallic symbol) and through the evocation of Malevich. If phallic symbol is an issue, Richter has a very long one.

Atul does not miss the point because he remembers the man with five penises from Valsad suffering from a running nose by none other than his late friend Sri Bhupen Khakar.

Bhupen Khakar is Sri Prasanna for Atul. He comes again and again both as reference and the very subject itself. So not only we have a series of kitschy icons of Sri Prasanna Khakar (grinning at its best) but also we have a road named after him (by Atul).

And Atul wants many roads to be named after many artists both living and dead. Roads of fame, obviously not to …it.

Atul Dodiya has a lot of signages and billboards in his works. Perfect symbolism of/for our times that too without ever evoking the spirit of Andy Warhol. Hey, Atul’s self-portrait as Bond is not from Warhol, it is from Bhupen. The spoofer of spoofs.

Irreverence- that makes Atul’s work radical. He paints a billboard on a canvas that announces ‘everything’. “Repair Anything’, in My Name is Khan, Shah Rukh Khan raises a board. This painting happened several years before Khan. Atul dedicates this work to all his contemporary artist friends, who want to ‘repair’ everything. Read repair as create.

Joke is pivotal in Atul’s works. Most often he inscribes jokes in his works. Doctor to patient: ‘Uncle, we have to remove your 'gollies’. Patient to Doctor: “When the gun itself is useless, what is the point in keeping the bullets?’

The other end of it we have a poem from a contemporary Marathi poet. He speaks of a man comes to the village with a gun and a smile.

And at the extreme end we have a victim of the guns- Mahatma Gandhi. Atul follows him in every guise, even at times he enters into history as one of the characters with an intention to know Gandhiji from close quarters. I remember the literary technique used by O.V.Vijayan with which he employs himself as a ‘humble historian’ within the myths and history in his meaningfully titled book, ‘My Experiments with Historical Research’ (doesn’t it rhyme with ‘Stories of My Experiments with Truth’ by M.K.Gandhi?)

Cynics would call Atul a Congress man because there is an abundance of Nehru family images in there including Sonia Gandhi. “How does it feel like when people call you a foreigner all the time?” Atul asks pointing at the image of Sonia Gandhi.

In the Shelf installation in one of the Danish museums, Atul has a lot of ‘Congress’ images. He skillfully brings in the project of post-Nehruvian nationalism into the ken of critique through the assemblages.

Then Atul confesses that his installations are not sculptural because he is a painter and he doesn’t intent to make three dimensional works.

Atul is a pleasure to listen and a joy to watch. He asks you to keep your mobiles either switched off or in silent mode, with the politeness and command of an air-host(ess). And your fingers move to the respective switches.

When Atul speaks big trees don’t fall….but big egos do.
Posted by JohnyML at 8:39 AM

Thanks, it was lovely reading this..am a great fan of Atuls..as we all r..

It was really good one... many new things are going to open in.....