Poetry of God and Stephen Hawkins 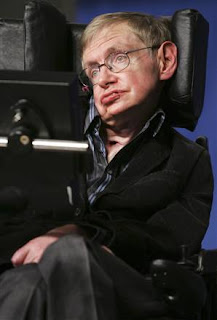 Stephen Hawkins, the world renowned British scientist, during one of his speeches last week said, there was nothing called heaven. ‘There is no life after death. Heaven is something conjured up by the people who are afraid of darkness.’

I read this yesterday in a newspaper. According to Stephen Hawkins, human brain is like a computer. Once it is damaged beyond repair, then it ceases to be a computer. Dead computers don’t have an after life.

In fact, Stephen Hawkins had invited the ire of the religious establishment when he argued that there was no God. He had abandoned the religious logic of Genesis.

Organized religious logic is crime, I believe that too.

I go to temples, which are small and peaceful. I can stand in front of a lamp, fold my hands and focus on the vibrations in the air. It calms me down.

In organized corporate temples, you are pushed, pulled, pickpocket-ed and left crushed up by the pressing human bodies.

When Stephen Hawkins says that there is no God and no heaven (therefore no hell too), he asserts the scientific logic of cause and effect.

There is no poetry in it.

But there is poetry in Stephen Hawkins’ life. He is 69 years old and has been bound to a customized electronic and computerized wheel chair for the last forty two years.

The image of Stephen Hawkins sitting on his chair with his head twisted to his right, is as popular as the image of Mahatma Gandhi and Nelson Mandela.

I should say his image is as popular as William Shakespeare, Oscar Wild and T.S.Eliot.

Poets are the makers of God, heaven and hell. Poets are sinners who have sinned against sinning.

Stephen Hawkins too has done that. Why?

Doctors had told Stephen Hawkins when he was just 21 years old that he would not survive more than a few years.

One of the brilliant brains in the world could have been confined to a grave had there been no miracle.

Is it right, at least poetically to say that it was God who was taking Stephen Hawkins along all these years? From the day of diagnosis to now, forty two years have passed. This man has traveled all over the world.

And he has seen the heavens in life and hells too. He imagined a universe, several galaxies and many other things that I never would understand. Hasn’t he been writing poetry all these years?

I remember this story which I read several years back in an office room at Nehru Place, New Delhi where I had gone to meet someone. Many of you may know this story that I am going to recount.

“All the while there have been four foot prints. And he believed that God has been walking with him.

When the days of struggle came, he could see only two foot prints on the sand.

He started complaining when he met God face to face.

When I was happy, you were with me but when I was going through trouble, you left me alone. Look, there are only two foot prints on the earth and they are only mine.

God smiled at the man and said, “Son, you see only two foot prints because I was carrying you on my shoulders when you were in trouble.”
Posted by JohnyML at 8:25 AM

thanks for lot of information.loved it.even i never understand about the time machine theory of stephen hawkins.

Here's a thought. When the void became aware of itself at that instance a split happened, the blackboard of existence and the white board of consciousness. The content of both can change but are symbiotic as is their content source. If you are all the is, how do you know you exist or will continue to exist? Expansion. At some point, as a matter of experiencing more and more, you create life and then create consciousness but with constraints. Limitations on perception and ability, so that through such life you can experience and know what it is to experience only parts of the whole. But there is a constant and that is the survival instinct built into all life. Now the only absolute purity is the void, so even this wide scope everything consciousness is a sinner. A sinner against the void.. Does this consciousness of the whole know the difference between right and wrong? What it knows is survival and to experience the changing content of what ever is on the blackboard of existence and the white board of consciousness.

As to the brain being like a computer... is that an 8 bit computer or 16 bit computer. There is a fundamental different in make-up, one is of earth/dirt/rock the other of life which does inherit earth which is not true the other way around.

IS there life after death? Is the Wrong question! Physics - consider what happens with energy/matter conversion. Do you really think your knowledge is wasted when you body dies? If so it doesn't fit physics.