Silence as Critique and Mirror as Introspection: Manjunath Kamath in his Studio 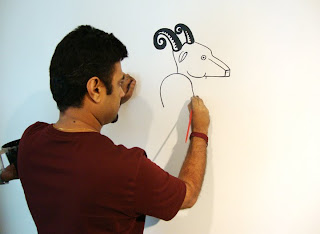 “Indian Contemporary art is a branch of Western Art”. A long strip of paper printed with these words adorns one part of the studio wall where once stood a huge painting which was later on shown in his solo show, ‘Collective Nouns’ at the Sakshi Gallery, Mumbai on 1st April 2011. Yes, I am talking about Manjunath Kamath.

Those who know the artist this statement does not provide any surprise. Famous for his quirky takes on art, artists, people, events and anything under the sun, Manjunath has been watching the turn of events in our art scene with his critical eyes. The statement on his studio wall was made by a foreign scholar. “Many thought that this statement was full of praise for Indian contemporary art. None saw the implied meaning; the meaning of seeing Indian contemporary as a franchise of the western art.”

Manjunath tells me that he decided to put this statement up in order to hurt himself every day. It is almost like those Christian priests who put themselves into pain just not to deviate from the path of the Lord, Jesus Christ. The re-enactment of stigmata in a metaphorical way works well with the temperament of the artist, who is critical about things but at times cannot escape from the snares that he tends to criticize.

I too have been going through a silent hiatus; avoiding most of the social contacts. It is a necessity; this recluse in silence, silent introspection. Hence I understand the self inflicting of pain and criticism on his virtual body, consciousness and conscience by Manjunath. He conducts me through the wall, which is vacant except for a six by six paper that has been given a tea wash.

There are several words written on the walls with inconspicuous pencil marks. `Exile’, ‘meditation’, ‘silence’, ‘greed’ and so on. “I treat this studio like a cave now. I walk along the walls and try to see what are all inscribed there. I forget that these are written by me. I try to see them as words randomly written by someone else, like the words written on the walls of the monuments. And these words take me to a different plane. Today I realize that the words and images could soothe a person with their sheer poetry. In poetry you need not look for logic,” says Manjunath.

Then he tells me about an incident. A friend came unannounced. He looked at the wall and asked the artist to add his comment just down that strip of paper where the western scholar’s statement was printed. “He was asking for the externalization of my internal feelings. He was asking for logic whereas I was thinking about poetry through isolation and pain.”

Citing a Kannada text, Manjunath says that people are of two types; one group wants to argue and defeat and they don’t believe in conversation or silence. The other group takes in anything without testing it against one's own experience, knowledge and awareness. You could see such people thronging around quick and quack healers. “There is only one way to deal with both these types. Surrender. Just surrender and then tell them that now you could tell me anything. You become a listener.”

It is important to know that people know what they want. Some people want logic and they live by that and some people prefer poetry. The advantage of the latter is that the poetic logic is more enduring than the argumentative modes of the former. Sandor Marai, the Hungarian novelist in his moving work titled ‘Embers’ observes: “People don’t need machines to learn what is important to them.”

Away inside the virgin forest swamps in Singapore, one day in 1917 four thousand coolies stopped their work and came out to the streets. They didn’t have any radio, telephone or newspaper in the forest. Still they stopped their works and demanded better wages, more rest and better working conditions. They instinctively knew a man called Lenin had gone to Russia taking Bolshevism along with him.

That’s the poetry of revolution. You don’t need mobile phones and internet to know the changes in the world. You just need to be aware.

Manjunath becomes an important artist because he knows what is the good medium and the ways to express his creativity. He has the freedom to not to prove anything to anybody. In his creative journey, he is alone, telling stories that would amuse people. “Intellectuals came to my solo show and said my works were poetic. I still don’t understand it is a dig or praise.”

One good thing about Manjunath’s paintings and other creative expressions in various mediums is that they are not conclusive. It is true about several artists who use their genuine skills to create art. Most of the contemporary art works (especially those behave like franchises of the western enterprises) are conclusive and argumentative. They want to prove a point. Yamuna water is polluted. They will say it in hundred different ways and even use Agamben and Zizek to prove that Yamuna water is polluted.

I am just using a metaphor of Yamuna. Bihar ki aatta (The dough of Bihar) casted in bronze and shown in the west and they say it has autobiographical connections of the artist. This unconnected-ness, this disinterestedness of work, purpose, its internal logic and poetry become conclusive and professional. Something is created, something is explained and something is understood and something is dealt with.

Artists have ceased to become producers of culture. They have become the retailers of culture in foreign shores.

And the new tendency is to call the artist who does work with hands, who uses his genuine skills to formulate his art ‘artisans or crafts people’. If there is no craft there is no art. Craft is what called tradition that passes through the present and becomes contemporary. Craft is past, present and future.

I am not talking about the mass produced craft. I am talking about individual talent that challenges branding by creating its own brand.

Today what goes on is the silent war between two continents; the continents of poetry and logic.

That’s why when I enter in Manjunath’s studio I see a round framed mirror. “I want anybody comes in first should confront himself before seeing anything else,” he says.

Unconsciously, Manjunath has absorbed the philosophy of Sree Narayana Guru, who consecrated a mirror in a village called Kalavankodam in 1927.

It is a pleasure to see artists in their studios; not with computer screens full of auction results and pornography, but with some music playing in the stereo and all the time in the world with them.
Posted by JohnyML at 10:00 AM

I hope a new Dawn in contemporary art through your text..
Manju natht kamath is able to add new pages in It..Best wishes..

Very good read. Agree exactly about the status of "craft". I had the experience lately of complimenting an artist on what I thought was his superb craftsmanship. He took that compliment as a back-handed insult, "I am NOT a craftsman! I am an artist!" I was shocked at his reaction. Sad that some artists have this aversion to being thought skilled in craftsmanship...a sign of our confused and superficial times.