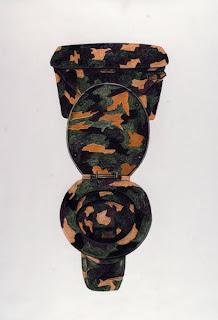 (The Waterloo, Pastel and Charcoal on Paper, 2010, Prasad Raghavan)

My wife recently gave me a nick name: ‘water man’. It is not because I turn water before eleven minutes. Not even because I have turned tasteless though essential like water after forty. It has a different reason and everything started after our maid for three years left us in March.

Then came another maid, stayed with us for a month, helped us to have one empty gas cylinder, a few empty bins where we store our provisions and several sleepless nights on high blood pressure within a few days of her arrival. She celebrated her arrival by making our thousand liters over head tank a hollow barrel of air on the very next day. Reason- she kept the jet on the WC on throughout the night.

We packed her off to her home after a month. But from that fateful day (when our water tank got empty) on, I have become a bit obsessed with the issue of water. I climb the terrace at least six times in a day to check whether enough water is pumped in. I not only check our water tank but also all the other five tanks of the five other flats in the same building.

One of these days, during an evening visit to a mall near by, my son asked me to accompany him to the gents’ washroom and while standing guard there (this happens because children are afraid of going into the toilets and our planners never consider the height of the children when they plan the level of the urinals), I found a tap on and water flowing out of it furiously. I tried to shut the tap and it was almost stuck.

I went straight to the floor manager, who threw a careless glance at me and listened to me half heartedly. Wasting of several liters of water did not appear as a problem to that gentleman, it seemed. I raised my voice and spoke in English and when you speak in English you are suddenly respected because of our perpetual Hanuman complex. He stood up and told me that he would fix it soon.

I am sure that the rouge in the shape of a floor manager must have done nothing to repair that tap- because it is not HIS water.

These days I have become obsessive about water. The personal crisis might have triggered this obsession. But today, it is not just a personal problem for me. Though I don’t know the basics of the global water politics, I am sure about one thing; the future wars would be waged for water.

It is said that civilizations are formed around water. Also it is noted that many a civilization came to an end when the water resources were dried up. Life was first found in water! When water withdraws life ends.

Or nature would wreck revenge upon human beings with water; unusable water that comes in the form of a Tsunami.

Today too, corporate houses buy land for extremely bloated prices. They buy land only when there are exploitable water resources around. Thanks to this people are dislocated to fringes of the cities where water is supplied through unhygienic tankers. Global hegemonies buy up countries and islands where there is water.

I don’t know much about water politics. But one thing I know, we are heading towards one of the biggest crises in the world; water crisis.

A few contemporary artists have done some works on water politics. But it is Prasad Raghavan who expressed it in a very powerful way.

In 2010, Prasad Raghavan did a work on paper with pastel and charcoal. This shows the image of a western commode covered with the military camouflage clothes. And it is titled ‘Waterloo’. Somewhere, it is inscribed 9/11.

Waterloo refers to the major political crises in the world. At the same time it also connotes that major wars could break out thanks to water. And it is all about the water in the lavatory; the Western Commode made fashionable by the West.

9/11 was another world crisis; Al Queda hit the twin towers in America. 9/11 became a by word for terrorism. But Prasad Raghavan says that when we flush once, 9 to 11 liters of water is forced into the commode. And how many liters of water we must be throwing into the pit every day?

I am concerned and I have become obsessive. I even started collecting the water that comes out of the water filter.

I don’t think my obsession is pathological. If it is, it is just a symptom of a bigger pestilence, which would take all of us along. Save Water.
Posted by JohnyML at 7:33 AM

Hi Johny,
please have a look at www.vpbaalakrishnan.com when you get time. I have done a project on water along with my students.
Regards,
vpbaalakrishnan

It's really a great feeling especially when you teach people to care for mother earth. We should practice this act and spread good deeds to promote fresh air and home for many kinds of species of birds and other animals.