Killing Image by Over-Display: A Case Story from Photosphere 2016 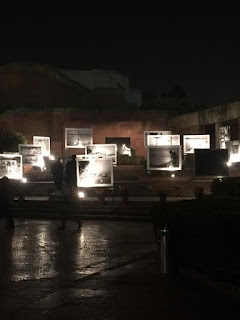 
What happens when some good photographic works and some clever digital works of art are put together in a haphazard display that spreads around the spacious and inviting courtyard of Delhi’s India Habitat Centre? Yes, you get Photosphere 2016. I am sure the organizers of this show including the artistic director who has given an unimaginative name like ‘Panchtatva’ to the project would not take my opening sentence with any amount of leniency, but I cannot help saying it. It was when the Delhi Photo Festival, a sort of photo biennale initiated by Prashant Panjiar and Dinesh Khanna came to the courtyard and plazas around it in the IHC, for the first time in Delhi perhaps people including the curators understood the possibilities of such outdoor display strategies and the photographs that had been otherwise given display spaces in the lobbies of the IHC’s moderate towers came out to welcome the viewers with their visual flair. Delhi Photo Festival did not last there for more than two editions and it slowly migrated to a much more open space at the Indira Gandhi National Centre for Arts (IGNCA) with its third edition in 2015. In the IHC, the DPF had adopted an exotic display technique; using most unconventional frames, structures and props to hold the pictures up and it had worked with the curatorial approaches.

Blind imitation of a brand could produce something similar but never the same. That is what is exactly happens with the Photosphere 2016 despite all those good photographs displayed there. The display frames are atrociously kitsch and the ambience creation a bit loud. Oscillating between a carnival space and a high serious museum plaza, the Photosphere as a whole looks a bit overdone like some bridal make up that has gone horribly wrong. Before I get into what attracted me best and what I think generally about photography as a creative medium, let me tell you how conceptual presentations and the overdoing of it could mar the aesthetic quality of a series of works of art. To know it first hand, you should look at the works of Shraddha Borawake who has presented lens based mixed media works in collaboration with a ceramic artist. The large laminated prints are propped on structures and are supported by too many ceramic pieces that, we should understand stand for earth, migration etc, etc. The more I look at it the more I feel the naivety of not only the works but also the whole display. Luckily, Bandeep Singh, one of the mentors and an acclaimed creative photographer who has maximized the possibilities of female body and earthen pot visually in his previous photographic works, this time have exhibited his works on Kolkata low life along the river front (a bit tired subject) on the plaza. The black and white prints have the modern classic quality as established by Raghubir Singh and Raghu Rai. 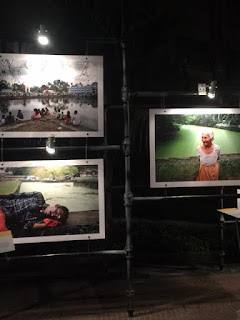 One of the best series that you could see here is done by Sunil KR, a Kochi based photographer, who under the mentoring of the noted archivist and photography artist Aditya Arya, has documented the dying ponds in different parts of Kerala. Ponds, local water bodies had been the hub of daily human activities in the villages once upon a time and today with the changes in social life they have been discarded. The choking of such ponds not only near the places of worship but also in the vicinity of the human habitats is a visual pointer of the changes in social life; from the community living to isolated living, in urban spaces and apartments, even in independent plots with well made houses where one gets running water either by the water department or from the overhead tanks. The ponds have been now claimed by now three forcers; land, weeds and anti-social elements. There are land-reclamations for the so called development and with these erstwhile ponds and agricultural fields are now turning into housing complexes. Most of the ponds are now filled with weeds and some of them left are the locations for antisocial activities. Sunil’s eyes not only see the degradation of these ponds but also he sees how they these same ponds had been segregated for the use of different castes and classes. 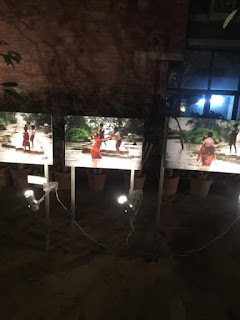 What happens to the families that include women, children and old people, of those migrant labourers who are left behind to fend for themselves in the most inclement weathers and hostile environments? Monica Tiwari, a young photographer mentored by Bandeep Singh takes her camera to the Sunderbans in West Bengal, one of the wettest spaces on earth with full of marshy lands and rivers. The camera is sympathetic and the gendered subjectivity of the artistic is successful in registering the poignant moments in the lives of the children and women. One of the images that captures the attention of the viewer is that of a woman carrying her children in waist deep water to the school. The joy in her eyes not only in delivering the material care and shouldering the burden literally with utmost care but also in becoming the object/subject of interest of the photographer who is of her own gender, a woman is so palpable in the work. So strong is the apprehension and sort of hopelessness in the eyes of the woman who again stands breast deep in water and looking for some fish to catch. This project is a successful one but only thing that I felt while watching it was the unnecessary sonic effect that has been added to the place of exhibition. The nocturnal sounds of the invisible creatures that live in and around marshy lands do create a sense of eeriness but it kills the intense silence that would have helped watching those strong images.

One of the mentors and noted photography artist and designer, Parthiv Shah, has pitched in with a video-digital-photography project in which he speaks subtly of the environmental issues but adding a few flying polythene packets flying around like wanderers and intruders in restricted spaces. He uses the static images of the historical sites and digitally adds the plastic covers flying in. Each video that lasts for a minute each (together three of them) is an intelligent way of telling how pollutants fly into our historical memories/existence and interestingly caused by our own doings. It reminds us of one thing smartly that these polythene covers do not come into our frames voluntarily nor automatically. They are caused by us. Slightly disparate an installation on the floor of the same projection black cube propped up in the backyard of the IHC is eye catching because of the illumination given to it. Three tin chests/boxes used by the migrant labourers to carry their belongings are lit from inside to illuminate the surface so that we get a feeling of looking into a treasure chest but what we witness is a humble man’s insignificant belongings. Ashim Ghosh’s digital animation and interactive installations look interesting but aesthetically they remain as only interesting as the government projects presentations. May be that is a subtle way of replicating the government strategy by the artist to convey his own ideas but somehow I remained insulated to such an experiment. 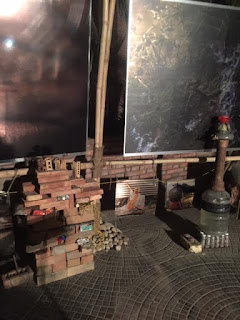 While witnessing this photographic project, what gnawing my mind was the utter inadequacy of the images to stand as images; the loss of autonomy of the photograph-ic/ed images. As seen both in the Delhi Photo Festival and the Photosphere 2016, photographic images stand with a lot of verbal and supportive paraphernalia, which in fact was not a necessity at the outset of the photographic advents in the late 19th century. The photographic visual stood on their own supported by the albums general introductions or by the little anecdotes below the album pages. They also stood independently as large framed images on the walls of private rooms and museum galleries. With their migration into the pages of the printed magazines and newspapers, they added to the readerly value of the literature that accompanied it or in turn added to the visual value of the literature itself. Even if they were a part of the literature, photographs often had a certain amount of autonomy. Ironically, today all the efforts are to separate images from the texts and give them autonomy but unfortunately, each image or series needs a sort of verbal narrative in order to hold the various visual elements in the frame together. Is it because that everyone is an image maker today and each image that demands distinction needs an explanation in terms of verbal introduction and contextualisation. In that case, if we reverse the process of viewing, that means if we take the photographic works away from the walls, and bring them back to albums and other methods of display, can they stand alone? I remember the makeshift display in specially created furniture appendages by Dayanita Singh and the book format produced by many a photographer.

One cannot buy a book of photography, book on photography and a photographic album by an artist today because it is damn expensive. Why do they price the photography books so high? Is it because the print quality is so high and good papers are used in production? I believe it is an artificially created value addition: you make a highly sophisticated volume of photography book and price it as if it were a limited edition portfolio. If that is the case there is a predetermination from the publication houses that the common lot that read literature need not buy photography albums thus produced. This is against the very grain of printing technology/philosophy on which the photographic prints are based. I think that make photography an autonomous art, it should be given the album quality back; that means people should be able to buy albums for affordable prices so that they could look at them in leisure. How do we make a photography artist distinct and worth watching when everyone is taking photographs. That’s where the value additions come into play. They should be exhibited not like carnival kitsch but in normal terms and conditions where an image could be seen independently. And then the viewers should be able to buy the copies of the books in affordable prices. While the capitalist market takes the autonomy of images away by making the prints expensive, the same market makes neutralizing efforts by providing everyone with a camera. So we have special photography making by the photography artists and counter photography making by the unintentional artists who wield a smart phone. But so long as we call photography an art form, then it should be given the status of an art form independent of a large text and context.
Posted by JohnyML at 5:27 PM