Some Portraits: An Exhibition in Photoink, Catch it if you Can! 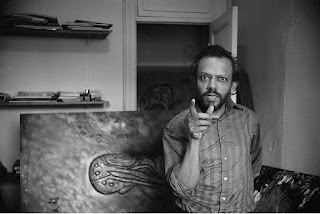 (FN Souza by Richard Bartholomew, not in the show, for representational purpose only)


In India bad exhibitions often take place in mainstream venues and the good ones in remote and extremely guarded avenues. ‘Some Portraits’ is a good show being held at Photoink, a gallery remotely located, may be for an art critic like me who prefers to walk to the galleries. Tucked away inside the Green Avenue, opposite the upmarket Vasantkunj but with strangely downmarket roads with ample amount of traffic chaos thrown in for effect, finding out this gallery for a walker like me is a real task and the credit of taking me there goes to the google map. It is a pity that you have to look into the google map to find out a place which is within three kilometres where you live. But once inside, the gallery has a good array of portrait photographs which many an art enthusiast has seen published here and there or exhibited in other shows. However, seeing the moderately sized photographs done in pigment prints with the familiar protagonists in the grand drama of Indian art ‘living’ within the frames, exuding their livelier and youthful selves from close quarters within a fortified gallery is an experience in itself, as the otherwise intimidating surroundings eased by the friendly accosting of the gallery executive. 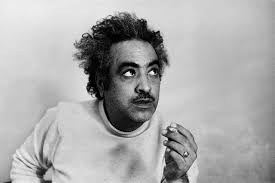 As the name implies it is a show of portraits taken by photography artists namely Pablo Bartholomew, Richard Bartholomew, Madan Mahatta, Sadanand Menon, Ram Rahman, Ketaki Sheth and Sooni Taraporevala. The subjects of these pictures are in the meditative best and the presence of the photographer seems to have not affected them at all. These pictures also give a very pivotal clue in understanding the portrait photographs which are not done with a ‘heavy purpose’ of documenting. There is no sense of intrusion and penetrative gaze in these photographs which itself is a visual forensic evidence for the non-intrusive nature of the photographer. He/she is a friend of the subject and the mutuality of ‘neglect’ that they share during the time of clicking also underlines the mutuality of their interest. The clicker and the clicked are bound by the moment of clicking, if I use the jargon of structural linguistics. Interestingly, the clicking which is a sort of signifying act desperately tries to fix the meaning of the clicked exactly the clicker has found during the time of clicking. While signifier and signified are conjoined in the sign which is, according to the structural linguists, in a flux, the clicked in a portrait remains a constant signifying both his/her past and future and the moment of clicking becomes an accidental decisive moment. 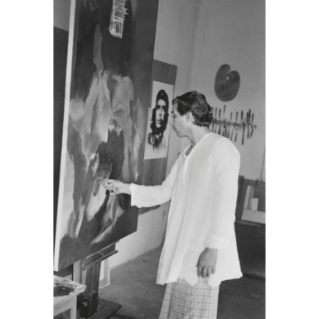 Portrait photography is an interesting genre of photography art because the artist is always interested in the extraordinary nature of the portrayed. This extraordinariness could either come from the arresting features of the portrayed even if he/she is insignificant the larger narrative of events. Perhaps, when a portrait becomes a part, not independent in itself, of a narrative, the negligence of the portrayed subject transforms to become a central character in the future understanding of the narrative and in turn the subject of the portrait him/herself. That’s where a portrait photograph gains autonomy as separated from the verbal narrative surrounding it in the first place. Photographers are interested in people not only for their insignificance but also for their importance. Photography shares a common space with both short story and novel in this aspect that it shares with cinema, theatre and journalism as understood commonly. A short story or a novel pursues the lives of a few people almost blurring the other characters even if they are a part of the narrative frame and in the sequential takes, a photographer like a story writer or a novelist, makes it imperative to vivify the locales where the protagonists of these portraits are located. The time-space coordinate or unity that is mostly observed in novels and stories though is not maintained by portrait photographers, with their pursuance of a subject for a considerable time with disparate lags in between, almost unconsciously attempts the same time-space unity in the photographs taken in different times at different locations. This unity is what we see in the portraits exhibited here in the Photoink gallery. Late Richard Bartholomew, a diehard art critic and photography artist leads the pack with his extremely truthful portraits of the artists like Manjit Bawa, M.F.Husain, J.Swaminathan, Nasreen Mohammedi and so on. Bartholomew Sr., has been a relentless critic of the art of his time with no malice intended even while pointing out the fault-lines of his own close artist pals. These photographs show how sensitive a man he was as not single picture portrays the artists in a trivial or frivolous moment. I believe frivolity of images without losing their aesthetical integrity is a forte of Bartholomew Jr, that’s Pablo Bartholomew. Though Pablo has developed a career of his own with hallmark subjects, documentary verve and experimental inclination, this present set of portraits shows that how greatly the father has influenced the son, which is not a bad thing at all. You could see the works of Pablo only with a smile on your lips as you tend to go back and forth comparing lights and forms portrayed in the works of Richard. 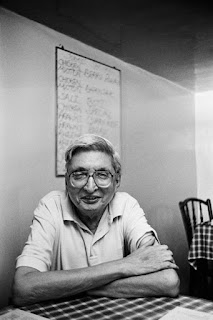 As I mentioned before, portrait photography could also be called as ‘access’ photography. You can take photographs only of those people in their private domains with who you share a close relationship or friendship. The photographers featured here seem to have this access to the artists who have become the subjects of these pictures. The only exception that we see in the whole show is Ram Rahman whose photographs feature artists outside their private domains (though we have some examples from Sooni Taraporevala and Madan Mahatta). The access could be very personal when it comes to an existing artist-model relationship where the model becomes a thing of worship and adoration for the artist, which we see in the lone portrait of the late danseuse Chandralekha by her production collaborator and companion, Sadananda Menon. Though Menon has taken innumerable photographs of Chandralekha (the enlarged digital version of a few from the repertoire were exhibited in Delhi recently), we have only one portrait in the whole show here, which looked a bit forced inclusion though it does not go contrary to the concept of the show that casually calls itself, ‘Some Portraits’. Ketaki Seth and Sooni Taraporevala also make use of this access to a larger extent and are presented through a sort of genre photographs that include two communities, the artist community and the Parsi community which make interesting overlaps.  Madan Mahatta, who is less celebrated as a photography artist but a photography entrepreneur, is represented with his portrait of three architects in Delhi seen within their creative surroundings. 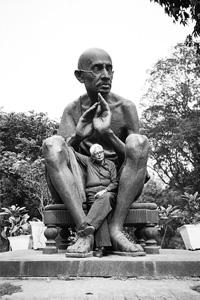 ‘Some Portraits’ is an interesting exhibition that reaffirms my belief in photographs as miniatures that demand private perusal from the close quarters. Perhaps, those artists who attempt huge prints of photographs for effect should think of making them moderate in size and in folio forms so that people could see them displayed either on walls or in albums. Any work of art that induces a sense of solitude in you is a good work of art for artistic contemplation starts where company ends and solitude begins. A photograph is a bench in the grave yard. Sit and watch, you feel very good.
Posted by JohnyML at 5:23 PM