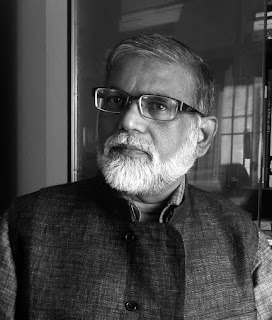 Raman Sivakumar aka R. Sivakumar, the art historian par excellence turns 60 today. Had he been in his native place, Kollam in Kerala, his kith and kin would have celebrated his 'shastipoorthi' (completion of sixty years in life) with a temple visit, huge feast, bestowing gifts and praises and above all showering him with a lot of love. But Sivakumar does not live in Kerala; he lives a hermit's life there in Santiniketan which he had adopted as his karmabhoomi almost thirty six years back. Staying in one place is alchemical as much as travelling turns people into gold; Sivakumar is one such art historian who lives in the sylvan Santiniketan, a place as the name shows, the abode of peace, hugely cut off from the din of urban locations where art historians migrate to in search of opportunities, still feeling shy to venture into the land of opportunities, but occasionally doing journeys to the seats of art and education, imparting knowledge that he has been culling from the great tomes and lives first hand and wisdom that has dawned upon him through intense focus.

Destiny, karma and all those words pin one down to or give wings to one's own life and work, whether we overtly believe in them or not have some strange and fascinating connections with certain people and their lives. Sivakumar,  when he came to this earth on 3rd December 1956 did not know that almost 75 years before him, on the same day a person who would be named Nandlal by his parents was born. This boy who was born in the penultimate decade of the 19th century when the clarion call for Indian nationalistic uprising thundering in the socio-political and cultural firmament would become Nandlal Bose, the great master (master moshai) of Santiniketan. And Sivakumar, from a different century would study him and would take the fragrance, form and philosophy of this master to another century. Strange are the ways of life and the great Leela of births and deaths. Sivakumar's life time friend and sculptor,K.S.Radhakrishnan interestingly born on 7th February 1956, and shares the same birthday with another doyen of Santiniketan, Binod Behari Mukherjee. Was it a mere coincidence or a strategic planning of life forces that these two people from Kerala would take the glory of Santiniketan all over the world, one by history and another by art, perhaps a bit more zealously and devotionally than the true Bengalis who too in no less verve extol the praises of their alma mater and the masters there? 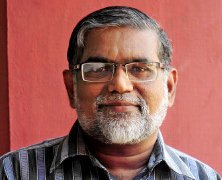 Sivakumar got down at the Bolpur railway station on a sultry afternoon and was a bit lost. Speaking no Bengali nor with any previous experiences of long distance travels Sivakumar was waiting for something to happen and he chanced upon another young boy like him on the platform utterly lost but with a rare sense of pushing through to the right direction. They met for the first time and sought solace in each other's company. The other boy would become K.S.Radhakrishnan. They are still a standing contrast; KSR is like a determined Moses and Sivakumar a shy priest who prefers to move around the innards of libraries learning the gospels of art. Sivakumar started off as a painting student and by the second year upon knowing his talents to register history in an academic perspective, the masters in Kalabhavana advised him to pursue art history. I am nobody to say Sivakumar's switching discipline has been a loss to Indian painting but I am confident to say that his desertion of painting has been a gain to the discipline of Indian art history, perhaps as happened never before.

By the time Sivakumar completed his masters in art history, as it happens to many talented academics he was given a teaching post there in the same department and the rest is history. Sivakumar's studies took roots there in the fertile soil of erudition and imagination initially nurtured by none other than Rabindranath Tagore himself. With a seminarian's discipline, focus, zeal and ultimately the ability to burn one's life for the mission, Sivakumar took it on himself the study of Santiniketan's art history at the outset by vocation then by the force of his own living philosophy. Rooted in one place was never an imposition for the young historian then as he had by the end of his academic training developed a serene detachment from the materialistic life which would later help him to pour his attention in to the details that the itinerant historians of the Bengal School had missed in their treatises. 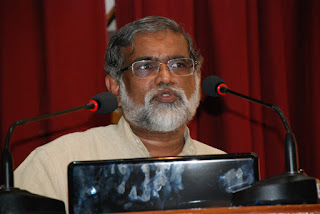 Proximity with the land of history which he would study in detail later and also with the persons who kept on extending the living philosophy and aesthetics of the place helped Sivakumar evolve not only a historian with academic objectivity but also a chronicler of their lives with unfiltered clarity which he would use later in his works to substantiate and embellish the fresh observations that he has made on them. Sivakumar is a niche art historian who at once focuses the place and all those who shaped up the philosophy of the place: Rabindranath Tagore, Abanindranath Tagore, Nandlal Bose, Binod Behari Mukherjee, Ramkinkar Baij, Sarbari Roy Chowdhury, K.G.Subramanyan, A.Ramachandran and finally his own friend, K.S.Radhakrishnan. There could be critique on his historical engagement post-Sarbari Roy Chowdhury Santiniketan art as he has not delved deeply into other 'Bengali' artists and visibly aligns his historical with those artists who have a definite Malayali origin as himself. The only answer I could find to defend Sivakumar in this matter is that an art historian by virtue of being the historian of a place need not necessarily be a historian of all those who dwell there but could focus on those people who have prominently extended the foundational philosophies of the school/place that Sivakumar has adhered to from the very beginning of his career as a historian. More importantly, his Malayali identity has never come in, blurring the lines of objectivity when he historicises the works of the three Malayali artists from Santiniketan.

Almost four decades of a career as an art historian has brought the best out Sivakumar and we could happily expect many more best historical engagements from him in the coming days. Indications of this future explorations have already been given by him in his recent work on an imaginary dialogue between two Tagore's (Rabindranath and Abanindranath). What Sivakumar looks for here is their search for a lost language; Abanindranath looks for it in the Mughal era and Rabindranath, in his own erasures. Perhaps it could be seen as Abanindranath excavating the chimerical and Rabindranath submerging one language for the emergence of the other, yet both pining for the loss. The book which would come out of this study would give a definitive new direction to Indian art historiography and would be inimitable, I am sure.

At this juncture, it is important to ask what would be the magnum opus of R. Sivakumar. When you have a niche historian it is imperative for each of his works to be magnum opus in their own right. However, I would say the four volumes of Rabindranath Tagore's works published as Rabindra Chitravali during Tagore's 150th birth year celebration exhibition (Last harvest) is it. The labour of love that has gone into the making of these volumes against all odds (especially when there are multiple agencies including the government ones involved in the production of it) has to be acknowledged with the country's highest civilian honours as Sivakumar deserves it. He deserves honours not only for this one particular but also for one of the great propositions in Indian art history, contextual modernism, made in his book on Santiniketan, which in fact has given a discursive tool for regional historians to articulate regional modernisms not only to pit themselves against the hegemonic national modernism but also to find their own voices within the national narratives of art history without feeling secondary to it by virtue of being regional. Sivakumar's studies on Nandlal Bose, Binod Behari Mukherjee and Ram Kinkar Baij are also voluminous and full of erudition and insights.

Sivakumar has been a close associate with both KGS and A.Ramachandran and each time they come up with a new body of works they seek Sivakumar out for the reason that they in their advanced ages need not spoon feed a new historian with the philosophy of their works. As Sivakumar is privy to their intellectual and personal lives, he could come up with gems of views which would give historiographic clues and directions to the future art historians in India. Sivakumar is a great pedagogue. For his students he is Siv da. Amongst the curators he is a giant with a quaint presence, always shy of limelight. Once on the podium, he self engages with the topic so that the audience cannot but follow the lead till the final round of applause of wonderment. Sivakumar curates exhibitions based on his works and the field of engagement and maintains the sanity of a musuem curator. Sivakumar calls himself lazy which nobody would like to believe but he adds that his laziness stems from the fact that if he involves in any lazing around or divert his attention to something else he loses a few minutes from his engagement with art history. Some people relax by doing their work; Sivakumar is one such personality. Sivakumar has the aura of history but he is ready to shed it for a few good jokes cracked in Malayalam and show him some sweets, he becomes a kid once again. I wish Sivakumar many many years of happiness ahead.

Thank you very much for that introduction and great to know such personalities. It really helps people like me, who is eager to know more about the art world.

Thank you very much for changing the template and now it is really readable :)

With Love and regards
Vineeth