The KMB way or the Bodh Gaya Biennale Way? Indian Art in 2016 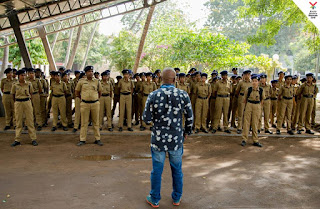 
So, that was 2016 for Indian art. What, I need not say for all the newspapers have done their bit of selections and filled the pages with the best of euphemism. For me it was as exciting as the absurd drama of Samuel Becket who had said ‘None comes, none goes and nothing happens, it is awful.’ But eventually the boy comes and tells the hopeless beggars that he, Godot may come tomorrow. So the hope remains. The tree that Estragon chooses to hang himself sprouts a single green leaf. Yes, there is still hope. Indian art scene was not going anywhere in 2016 though artists were going here and there, and a majority of them working as cheerleaders for the rich, powerful and the visible artists. When the last season came to a close with the closure of a few galleries, still the hope remained and everyone thought that the coming season would be great. The 2016-17 the season started with the engine of art vehicles making awkward noises of strain and fatigue by September but before something substantial could happen our Prime Minster struck a different code of demonetisation sending everyone reeling for a while and later sending each one to strategize the modes of saving the hoarded money.

Anyway things seem to have settled for the rich and the buying class though there is no surety that they are going to pump in money in terms of collecting art for aesthetics sake or investing in art for business sake. May be everyone is waiting for the magic budget to be presented in the Parliament perhaps a month earlier than usual. Indian art market has tremendous abilities to withstand the money pressures and it had shown a commendable resilience since 2009 onwards. Despite the global melt down the Indian art market could push through the walls that were coming closer and still could celebrate two KMB editions and some other large scale shows. Most of the galleries could keep their artists floating by placing them in residencies, solo exhibitions and art fairs. But Post 2015 the story is slightly different. The fatigue seen around the third edition of the KMB, if I go by the lacklustre response that it has received so far in the facebook postings by the enthusiasts, this is not just a fallout of the demonetisation. It has become clear that the curator Sudarshan Shetty has traversed into the areas that are unfamiliar to him like the Latin American poetry and the result is not so encouraging. Certain art works that the organizers had thought would become the highlights of the KMB received cold response not only from the audience but also from the press. Not a single report has come about the cartoons of the noted cartoonist E.P.Unny or the mural scale works of P.K.Sadanandan. 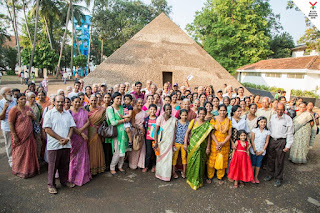 Though the KMB claims to have a binding theme of ‘locations where inner visions arise’ the result so far (what I could learn from their postings in the KMB facebook page) is that there are neither visions nor inner visions. There are only peripheral visions. The reason could be the lack of expertise that KMB is facing today. The directors of this huge art initiative are artists with their own merit and stance but unfortunately they are not the scholars of the fields that they have been handling in the biennale. Sudarshan Shetty could be an acclaimed artist in the country but never it has been said anywhere before that he is a scholar of poetry, literature or critical theory. I am sure that the organisation has taken help of the researchers and scholars pertaining to the areas chosen, but the major problem of the KMB is the lack of critical leadership. This is reflected in the present Student Biennale which hardly gets any mention anywhere in the public discourse. Besides, it was reflected in the blanket cooptation of various disciplines including film, theatre and music as part of the second edition of the KMB. The first edition of it had the advantage of being the first Biennale of India and also it could bring an array of fresh artists from India as well as from abroad.

With the Government of Kerala pitching in to support the KMB with almost Six crore rupees for every edition and the support from the business magnets like Yousuf Ali who has given two crores this year, it has been categorically understood as a tourism event and even a touristic venture which would bring foreign exchange to the government coffers. On the opening day of the third Edition of the Biennale the Chief Minister of Kerala had declared that the government would build a permanent venue for the KMB. But interestingly the intelligentsia in Kerala has not asked certain disturbing questions. KMB has already absorbed the major exhibition space of the Lalit Kala Akademy, the Durbar Hall for almost six months every Biennale year. That means during this time no other artist could exhibit there. With a permanent venue for the KMB, what the CM left unsaid is that whether this space would be given to the artists of Kerala for their use when there is no KMB on or the space would be given for other commercial and industrial expos like the way they do with the Pragati Maidan halls in Delhi. Would the KMB administration allow different activities to take place in their ‘permanent’ venue is another important question. If not, wouldn’t it be a huge waste of space which in fact would be used only by an organization. For a small state like Kerala which does not have huge allocation of money and space for the promotion of culture, wouldn’t the move be an undemocratic move? Otherwise, the government should take over the KMB and let the present organization do the things on behalf of the government so that there could some kind of accountability in their activities. Otherwise the government could also consider asking the KMB to go a full scale private company with shares open in the market and government could lease out a space against a rent, which if I go by the Pragati Maidan rates, would amount for three months twenty crores. Wouldn’t that be a bigger income for the government than spending money on a private company which is not accountable either to the government or to the people? 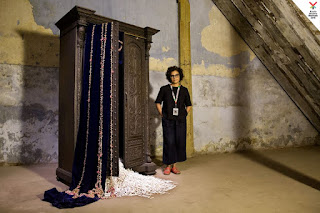 There are efforts to emulate KMB in other parts of the country. The small scale and regional Pune Biennale seems to have gone in the KMB way but it is bound to fail as the organizers do not have the will power of the KMB leadership. This year we also saw the Bodh Gaya Biennale which is unfortunately moves against the very spirit of KMB; Bodh Gaya Biennale has got neither direction nor a curatorial vision. It is simply a large scale show with so many artists. In terms of market and positioning, Bodh Gaya if at all it wants to be a Biennale should learn a few lessons from the KMB, which is obviously the market leader in the given scenario. In Goa, another ambitious venture has come up titled Serendipity. It is a larger platform for various art practices and debates. I would say so far it looks like the Coke Studio version of Indian art. Besides, the organizers have tried to leave their foot prints all over the country by making strategic collaborations. It is good for brand build up but I am not sure whether it is going to work as reliable collaterals for the organisers. The failure of collaterals could be seen with the KMB this year which are sparsely attended or talked about. It is also fortunate that artists and art organisers want to attach their names with the larger brand. Let me give a piece advice to the KMB leadership, please do not let too many collaterals to share the logo as it has become a pointer of desperation for both the parties. Another funny thing that I observed this year is the participation of the former Biennale artists in small scale shows in temporary venues. Artists like Gigi Scaria and Vivan Sundan downscaled themselves by getting into all kinds of shows and even trying to make their presence felt in Kochi. In fact people have not forgotten their works in the last KMB for the wrong reasons!

For the Indian art scene a couple of controversies are a must. To begin with, Jaipur had its share of artist bashing by a woman leader of some inconspicuous quasi-religious and political outfit, but with the timely involvement of the Police, sanity prevailed and a controversy snowballing into a national debate of nothing was averted. In Kerala we had two successive controversies regarding the cover page images of a well known literary magazine. While one was opposed by a Christian outfit the other was opposed by a Hindu outfit. Kerala could also show that a work of art could be brought down by a few phone calls. Interestingly, there was a protest against the clamping on freedom of expression which was boycotted by the same artists whose works were taken off by the magazine after threats. In this year I also saw the contradictions in terms of art criticism and art writing. A writers’ conference was organized by an editor who in her whole career has written hardly a few pages conceptualizing and directing a writing workshop for all those whose names I hardly have seen in magazines or newspapers or even in blogs. It happens only in India. But at least it happens in India. Had it been elsewhere, we would have been deprived of having these fun moments.