How ‘Tihar’ Project fails the Curator in Veer Munshi 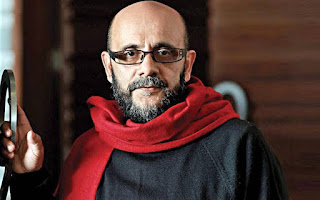 
‘Tihar’ is an exhibition of forty contemporary Indian artists and around hundred prisoners lodged at different jails in India, prominently in Tihar, Delhi, hence the name Tihar. This is a joint venture of the Delhi Police with Sahitya Kala Parishad and Central Lalit Kala Akademi. Noted artist Veer Munshi is the curator and the co-curator is artist and one of the member of the Lalit Kala Akademi, Vijendra S Vij. Veer Munshi, in my view is the salt of Delhi’s art; an essential ingredient. A pleasant man with connections across artists and activists, Veer has also curated a few shows of which I remember, ‘Back to School’ which had featured his contemporaries from Baroda School (MSU, Baroda). But if you ask me to rate this curatorial venture and mark it out of ten, I would give two marks to Veer and one mark to Vijedra and you may choose to call it a flop show. Before you rise cudgels against me let me explain why I rate this so low. 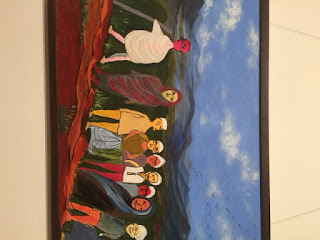 (work by one inmate)


It is not a ‘Veer Munshi’ show and that is the primary reason. It could be anybody’s show that takes place in government buildings, hotel lobbies, ICCR and so on. Then why did this artist with considerable reputation amongst the peer group and in the art scene in general get into such a shabby work? That is where the dilemma of some people who is a good friend of everyone and finds it difficult to say ‘no’ or refusing to lend one’s name to a project. Anybody who visits the show understands that there is no curatorial intervention in the project at all. Small town galleries could hang works better than this; and even they could hang better works than what you see in this show. The reason for this shabbiness is simple and understandably a disease that eats up the core of most of the national and regional academies; quantity over quality, ever ready to please the political bosses, yielding to a vague notion of democratic approach even when democracy gets butchered in all the other fields, urgency to do short term projects and above all killing a project by ‘contributing’ artists to the project. The above mentioned reasons simply round up how public sector art projects mostly fail. Hence, whether you use the name of Veer Munshi or one of the international toppers like Germano Celant, the result will be the same. It is a Beuys-ian dilemma- how to explain stories to a dead rabbit. What a curator could say is, again in the Beuys-ian fashion, ‘I love India, India hmmm...loves me.’ 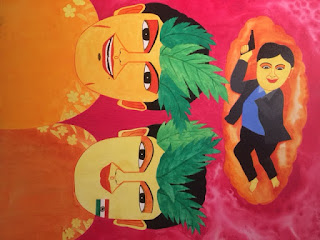 According to the co-curator of ‘Tihar’ (the curator would come only in the second half of the day. I doubt, he would dare) this exercise was initiated in June and a set of senior students were taken to the Tihar Jail and conducted an intense workshop with the jail inmates who were inclined to do some art. By July, the contemporary artists were contacted by the curator and then ten artists each were contributed by the Sahitya Kala Parishad and Lalit Kala Akademi respectively. I am sure Veer agreed to do this project because he had experienced a Tihar project in 2009 when I was the curator of the project which was initiated by the Ojas Art Gallery in Delhi. He might not have anticipated this outcome. You may find it why I am pitching more on Veer; I do not have any other devise to talk about this eminently avoidable exhibition. But what makes the show interesting is not the works of the contemporary artists but the works of a few inmates who have done works independently and collaborated with the contemporary artists. 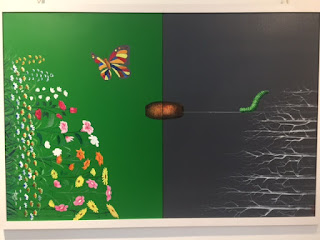 (Sudhanshu Sutar in collaboration with one jail inmate)

Art for people from any situation is a way to self refinement, meditation and confession. That’s why many a shrink says that art is therapeutic. Frank Cizek, who had studied art of the children used the terms ‘diagnostic’ than therapeutic. When it is diagnostic, you would understand what ails the person who has made that art. When treated as therapeutic, art becomes a part of the remedy than diagnosis. I would prefer to look at art as diagnostic than therapeutic because by looking at the works one could see what really is going through the artist. In Tihar or in any other jail, when the inmates do art, they do not do it as a therapy but as a confession; it is a sort of opening of and a response to it with a lot of compassion, consideration and understanding could alleviate the person from that situation, if not from the physical walls of the jail. There are NGOs doing art projects in Tihar and other jails orienting themselves to the therapeutic mode. I am nobody to judge whether it is doing good or not doing good, but what I want to say is that there is an added interest to the art of the jail birds recently. 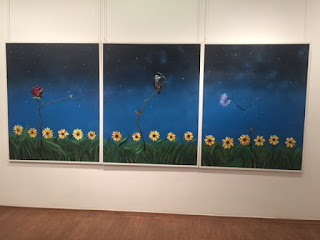 You come across five kinds of works in this exhibition: one, paintings done by the contemporary artists, paintings done by the inmates, paintings done by the contemporary artists in collaboration with the inmates, some terracotta works and finally, the furniture with exquisite ornamental wood carving done in the Tihar carpentery workshop. Most of the inmates, as they are confined and living under strict rules, imagine a beautiful world elsewhere, mainly in their minds. Many are lovelorn souls and they find their love expressed through the image of Krisha in various postures with his Radha. One could get the religious cross section of the inmates also. There are moments when the inmates really become idealistic as they find themselves confined for an extensive period. So they are the first to make works with social message, which surprisingly I found often related to the protection of women and respecting women in the public domain. The reason, from my research almost eight years ago in the Tihar Jail number 5, is this that most of the inmates are young and several of them have committed the worst for fulfilling their love affair or proving their manly worth to the love interest. It is not rare that in the moment of depression they carve the girls’ names on their body with sharp objects. 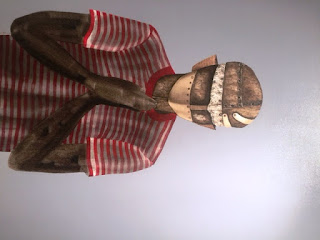 Some of the inmates are very idealistic. They even go back to the national history and bring images of Gandhiji and the freedom fighters into their pictorial scheme. Most of them are done in a naive fashion. A few of them have got good artistic hand and complete control over the colours. They are in fact artists who happened to have committed crimes. Sudhanshu Sutar, a contemporary artist from Delhi works with an inmate Mukesh Prajapati, who has an exquisite way of painting nature in order to complement the one pupa and larva painted by Sutar. Balagopalan, another contemporary artist works with Mukesh Soni, another inmate and Soni writes a grand statement about his confinement and exhorts the world that even in the worst confinement one could do the best for the world. Pratul Dash, one of the Delhi artists has worked with six inmates to create an interesting canvas which too has a dominant nature theme, perhaps seen only in the collective dreams of the captives. Farhad Husain humours the viewer with two seated inmates while an ‘angelic’ policeman hovers above their heads, in his typical style. Phaneendranath Chaturvedi, in his hallmark style has brought out a man confined in himself and how the body turns into a torture chamber. Sanjeev Sonpimpare and Prashant Sahu also have done works worth remembering. The rest is a haze. 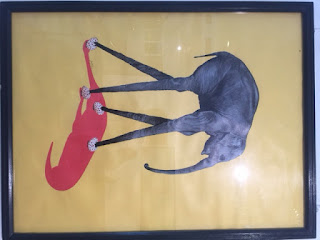 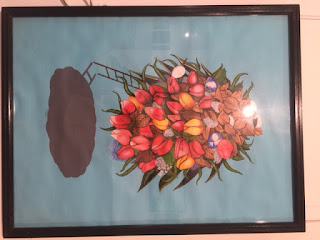 There are two works by Chitan Upadhyay, who is currently lodged in the Thane District Jail where he has recently started painting for himself and giving workshops for other inmates. The jail authorities have sent fifteen paintings from Thane itself, a commendable achievement within a short span of time since Chintan started working and giving workshops. One of the works by Chintan shows a stylized elephant as we have seen in Dali complete with its feet in polka dotted socks. Another one is a flower vase with closed flowers. If I have claimed anything about diagnostic, then I am lost here. Chintan comes across as a very closed person in these two works. He is a garden but not letting anyone smells its fragrance; stand aside and watch, do not touch me. I am an elephant capable of changing forms, tread carefully, I could hurt you, he seems to say. These are works that need careful analysis. 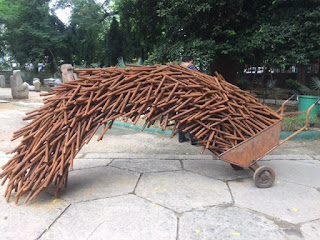 Veer Munshi also has done a scrap metal welded sculpture; obviously they are iron chair frames sourced from the Tihar dump. Finally, let me count the number of curatorial failures: one, there are no title or name cards to accompany the works, hence you don’t know who did what. Expecting that the viewers would understand the artists by their style or signature, expect for the artists named above , I did not recognize anyone. The narratives of the jail inmates are always interesting and full of pathos and hopes alike. For them, each painting is the narration of a dream that they have dreamt or dreaming to dream. Hence, what you expect minimum is a short note on each work either by the artist or by the curator/s. There is nothing given in terms of literature. There is no wall text or a press release as handout. Upon asking Vijendra told me that the brochure is getting ready and it would come within two days. Yes, I understand. On 31st the show ends and on that day you have all the brochures ready. The bills are cleared, the brochures are sent to kabadi in bulk or rot in some government storage. An exhibition of this kind helps the society to understand the role of art not in normal life but the unusually dissimilar life inside the jails. In order to make it happen, there should be plans and strategies to get the message across the society. Nothing has happened so far. Even there are spelling mistakes in the invitation card (Sahitya is written Satiya). A huge waste of energies and potentials.