Spirited Away: The Works of Subir Hati 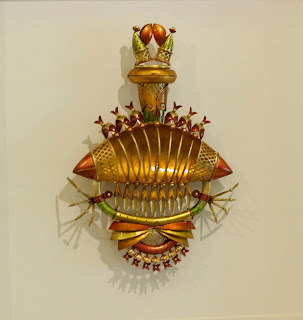 
Glenfiddich Single Malt Whiskey is very tasty. It’s give you a slow high with its effect lingering on as a sweet memory refusing to fade. I am not doing the company’s advertisement here. Good companies advertise their products with works of art and bad companies with mineral or sparkling water. Glenfiddich, like Absolut, Skoda, BMW, Samsung and so on, supports art and it gives three months residency to artists from various parts of the world. Subir Hati, a Kolkata based artist went to Scotland where the Glen breweries are located, spent three months in the locales with artists from different places and upon coming back did a series of works besides the ones that he did after the ‘residency inspiration’ and they are currently on display at the Art District XIII at Laddo Sarai, New Delhi (The former art district has now reduced to a Panchayat with gaping holes where galleries stood a few years back). Titled ‘Fly Ash- the Phoenix Redefined’ this show has some very pristine works of art that Subir Hati could always feel proud of. 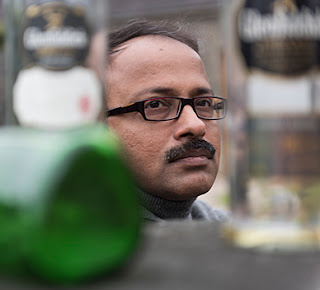 Fly ash and Phoenix could be connected only in the matter of something burnt down; what remains is ash. The rebirth of fly ash is always as bricks that go into the making of buildings. Phoenix is a mythical bird that is said to resurrect from its own ashes. While Fly Ash is not a great metaphor, Phoenix has been a sought after metaphor especially by all those who have tasted the bitterness of failure at some point of life and come back to life with certain grand achievements. Behind every success story there is also a sob story; ash belongs to that side. I could not really connect these two parts and believe that the artist should have something very personal to name the so show. I could not connect the title with the show mainly because the works are so beautiful and thought provoking at once and there is no chance of them evoking burning down anything or even attempting self immolation. I leave that part to be explained by the artist at a later stage in his life perhaps in his autobiography. 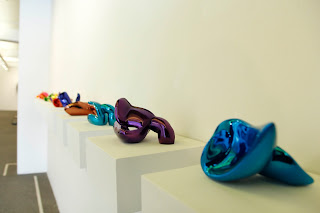 The show has three major components; sculpture, paintings and sculptural installations. What gives you a mixed feeling about the show is a large scale copper metal welded sculpture in the shape of a huge bug titled ‘Oxidised’ (medium: oxidised metal). You immediately think of an artist like Janakiram or Nandagopal. But Subir has a different take. He plays with materials in different ways still sticking to the variations of a single form; the bug. Perhaps, you don’t see it in his paintings. But all his sculptures have this dried insect form coming up. It is visible in the works like ‘Mirror in the Frame’ and ‘Impressions of a Melancholic Milieu’. The artist attempts to remind the viewers about mortality and the eventual turning of every living organism into shapes recognizable only when employed in a familiar zone of comprehension. Thus these body parts (dried and skeletal) not only become memento mori but also turn themselves into a language that seeks fulfilment in recognition by the other. Hence, these shapes/forms/images are also a sort reminder ‘Nature Morte’. The mirrors fitted into them give a fragmented reflection of the viewer almost making it impossible to see the face reflected there. It is not a dehumanizing reflection but a depersonalising one. The ‘who’ in the shell of the word ‘who’ is not the ‘who’ recognised in the reflection on/of/by others. Great lesson through adequate visual means. 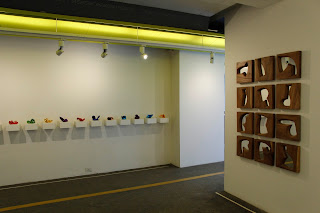 There is a series of small sculptures that could be crumpled unrecognizable objects, plastic bottles or even deflated balloons. But they are not of the above. They are ‘Handmade Flowers’. They fibre glass flowers (wilted ones) chrome painted. They are many in colour and somehow Subir deflates the gigantic spectacular sculptures of Jeff Koons and brings them to a kind of miniature scale. I would like to believe that it is a conscious effort to reverse the process of spectacularisation into miniaturising the objects involved in the spectacles. While they could also be the beautiful reminders of the decaying life after death, it could also be seen as the sheer materiality of surfaces and shapes that allure the people to touch and feel the objects but are denied the chance or even if given the chance the expected tenderness is felt as an illusion; a displaced softness. The aloofness of a spectacular world is captured in this work by the artist. 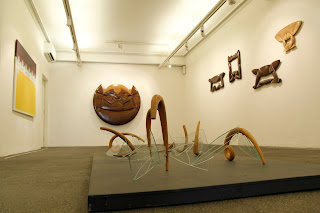 (Lying down in Others Land- by Subir Hati)

‘Lying down in others Land’ is an unassuming installation flattened out on the floor with some forms vaguely resembling the dragon flies landing on a plastic earth (a disapproving or an unwelcoming one) and stuck there in the process. I do not know whether while doing this work, Subir was thinking about the displacement of people from one war torn land to the secure ones in Europe. Even if he was not, subconsciously, one could see the artist responding to the mass migration issues; you as an exile or a migrant are as brittle as a dragon fly and you are about to land in a place but that place doesn’t quite receive you with open arms. The same theme comes in a different work, which I think is one of the favourite works in the show, titled ‘Dark Sky’. This is a vertical sculpture which is porous and vertical from floor to ceiling, formed by interconnected monochromatic butterflies. They are all white so you wouldn’t really see the butterflies in the first look and as you look up you see two layers of these humble little beings turning to pitch black. Suddenly the white portion becomes earth and the dark portion becomes the dark sky. It is also a tree of life with a white bark and a dark canopy. This could also be the hopelessness of ‘flight’. 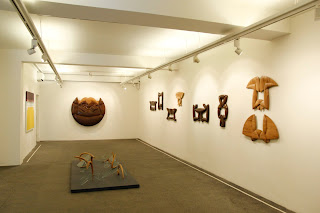 There is a series of small twenty frames generally titled ‘Axis Denied’; once again I do not know how the title opens up a window for the viewer to view into. But the work is crystal clear. Perhaps, I have not seen such exquisitely done metal sculptures of late. They look as if done with copper metal sheets and other shapes by the same metal with added colour here and there for effect. This is a bug world; a cabinet of curios, beautiful bugs collected from all over the world. They are non-existent bugs that Subir creates out of his extreme skill and craft in ornament making. If you could wear a bug for the party, then buy one and hang it around your neck. This is the work that any wife could bring home and declare to the husband, ‘baby look, who I have brought’. A husband could do the same without making the wife frown. This is a work that a young girl could hold in hand and show to her mother. A young guy also could do it. This is a Kafkaesque world run through the alchemy of Subir’s ornamental dexterity. This is what I would show how aesthetic finesse and traditional craft of ornament making could brought together without compromising both; looking at them, one would feel good about fine art and fine craft. 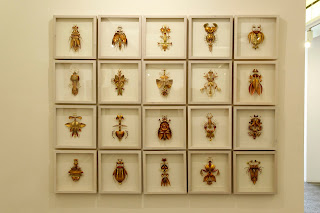 Subir’s paintings are optical in a way as if they were done first in origami and later painted on canvases with adequate illusionary effects. Even this origami effect could be seen in a relief sculpture done in wood titled ‘Frozen Sun and the Sun Catcher’. The paintings are in a Riley-esque and Mondrian-esque. I am not saying that the artist has picked the threads from either of these artists. My effort is to evoke a near similar visual impression among the readers. However, this artist’s forte is sculptures and the paintings are sculptural in their illusionistic effects. Subir has an immense possibility ahead of him to catch on time and experiment with. He has the modernist formal and technical grounding, and also he has the conceptual rigour to push the works beyond mere formalism. I would be happy if he wouldn’t burden the works with so much intellectual burden.
Posted by JohnyML at 8:55 PM