Jagannath Panda, the Oracle in his Crystal Cities 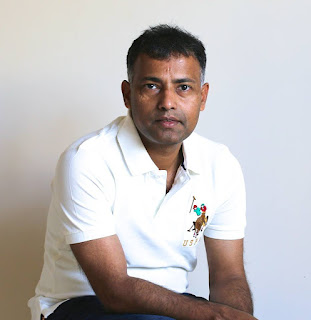 
Perhaps this is one solo exhibition that you would miss the details if you wouldn’t really visit the show. In case you are planning to buy any work of art from this exhibition, please make a visit to the gallery even if the gallery management sends you a three sixty degree view of the exhibition/works. Yes, I am talking about the latest solo exhibition of Jagannath Panda at the Vadehra Art Gallery, New Delhi which is on view till 12th September 2017. The show titled ‘Crystal Cities’ demands close scrutiny and the images just don’t do any justice to the works. Hailing from Odisha, educated in the MSU, Baroda and Royal College of Art, London, Panda has been one of the artists who could establish himself by the time he finished his education; while in London, Panda got into a few experimentations with sculptural forms and verbal language besides doing a few videos, one of which had dealt with the facelessness of urban life through the image of a closing and opening door of an elevator and the booted feet going out and coming in.

By the second half of the 2000s when India’s art market was thriving mainly on painting (mercifully this time not just oil on canvas), Panda got into making a lot of paintings in which his major concern was the fast growing and metastasising urban reality called ‘Gurgaon’ (now Gurugram and formerly Gur Gavaan) and the hopelessly trapped people and animals there. The language that he experimented with was in a way a trendsetter for many a Odisha artist who started literally emulating the same which had forced Panda to make yet another quantum leap to a new visual lingua that heavily depended on the traditional textiles as well as imageries of/from Odisha. The collages on canvas was but short lived an experiment for Panda (as far as I know because in the contemporary art history we have a very clear rupture/break/lacuna/hiatus of five decisive years. Now Panda has come back with a vengeance, a sweet one at that. 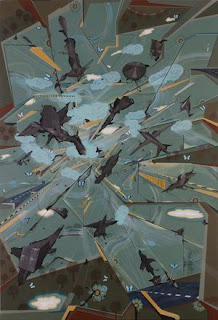 Let me once again remind the reader of the video that Panda had done in 2004. This was presented in an exhibition titled ‘The Twilight Zone of the Great Indian Digital Divide’. After thirteen good years, I would say, Panda has gone back to the threads that he had left loose there in the video. If there were so many people coming out and going into the lifts in that work, the present body of assemblage-drawings (let me coin that term in Panda’s case), paintings with mixed media (acrylic fabric, glue on canvas) and the sculptural installations (wood, fibre, plastic, artificial turf and so on) more or less erase people from it. But imagine a scenario where a ghost elevator comes, opens and goes up or down, constantly. That would impart a very eerie feeling, exactly the way Gigi Scaria’s ‘Elevator from the Third World’ which he had shown in the Venice Biennale a few years back. In Panda’s case, he presents a city almost erased out of people and in its place huge futuristic structures come up; they are neither dwelling units nor famed architectures but sort of space ships landed for regulating the urban lives.

I say these works of Panda are futuristic because the structures, that in a way the structures imitate broken mirrors that crystals (as the title suggests) but they are just incapable of ‘reflection’; these surfaces do not reflect light (but as materials they do because they are done with shiny cloth material glued to the canvas) nor do they permit light to seep in. At the same time, the artist seems to suggest that these mammoth and inorganic structures do not let anyone who dwells in there to ‘reflect’ on anything. They are like crushed pieces of architectures after some bombardment and pulverising but have been customized and strengthened for future use. Or rather they could be seen as alien structures that come to have established in due course of time. They could be even the transformation of the existing buildings into customized habitats. One has to really train to see human beings in these works; there is only one shadowy person seen crouching. There are some animal presences as if they were the foundations of these architectural monstrosities. 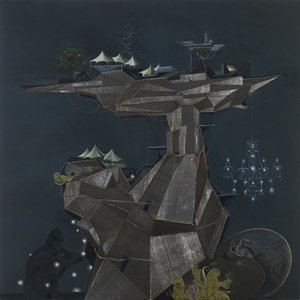 While standing in front of these works, I think of all that have happened during the last two decades. In one of the works titled ‘Speed Metal’, Panda brings in a sort of kinetic feeling through the evocation of rapidly moving lines and forms. They are like the ominous crows in Hitchcock’s ‘Birds’ that transform into metallic birds, crushing into the glass buildings as if they were the aeroplanes that flew into the World Trade Centre in New York. At the same time we see the logos and mascots of the major international automobile brands rushing to and fro through the pathways chartered by the artist. In another sculptural installation, an upside topographical view of the city which is cleverly presented as a board game and a frozen medallion of achievements has a golf course patch and the metallic strings that support huge edifices, fitted with satellites of surveillance, which together becomes an emblem of muscle and money power

The same idea of the combining of muscle and money power is seen repeated in the sculptural installations like ‘The Profiteer’ and ‘The Custodian of the Untold Truth’. Interestingly today morning, during my daily reflection on things around me, I had written the following in my notes: “Money too has become a post truth thing for today it no longer shows off what it could buy but what relationships it could generate with the things that have been bought by that thing called money. Only the lower rungs still bother about the questions ‘how much money you earn’ and ‘how much you save’. The others have learned it as post truth meaning. That’s why we are no longer bothered about the exorbitant amounts that are siphoned off or earned in kickbacks.” These two works reflect exactly what I thought about in the morning. There is a profiteer and a custodian of the truth. One is a Raven and the other is a Hawk both are majestically well placed on their pedestals. They show their power by the position that they have earned and definitely the pre-truth factors exist in the form of shovels and other work implements. Though slightly literal here Panda has cleverly pulled off the idea in these two works. These hawks are no longer interested in the question of what they earn and what they save; that would be done by someone else, they are here to enjoy and watch over eternally. 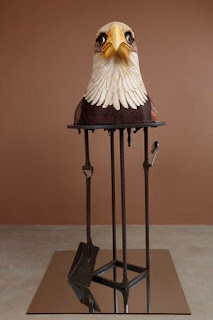 In a way, all the artists are scavengers of minds and urban spaces. Right from the greatest writers to the well known artists dig into the human minds and the urban spaces for their raw materials. Mostly this scavenging act gets them what others have discarded but what they find interesting and meaningful. Here in the scavenging for aesthetics (in classless and casteless society scavenging is no longer an offensive word) takes Panda to the ‘terrible beauty’ given birth by urban expansionism. As development is meant for people but unfortunately turning the people out of what has been developed for the benefit of them, urban expansionism has achieved its greatest aim (perhaps an accidental but inevitable one) of removing people from the expanded spaces. Hence, the privileged ones are within the gated communities, living their sanitized and perverted lives far away from the milling crowds that have been herded into reserved areas even kilometres away from the outskirts of the cities. Here I am reminded of Aldous Huxley’s Brave New World, where a new breed of human beings have been brought up without letting them know about the normal human beings who are condemned to live in reserved areas and catchments. One takes a time travel to reach those places, perhaps they would never know such world exists.
The whole show is futuristic because whatever I have said in this article has not become true vis-a-vis the works of Panda. But Panda envisions that world in advance and tells us that it is possible. The romantic and the hopeful in the artist, paints the images of the beautiful birds. Over the metallic birds, he lets his dreams in the form of butterflies flutter. Formally speaking, the traditional Odishan feel that Panda had deliberately tried to give his paintings a few years back is curbed though his affinity for the textile materials has not gone down. He has found a way to use cloth on his work not just as embellishments but even for the creation of the ‘body’ of the works. Crystals are good to look at but are never used for looking at truth. Crystals are gazed at in order to find what is in store for people. Magnifying glasses are used for a closer look. Glass shreds are for refraction that reflection. These works roll all those into one; means, the truth is never told. Or in other terms, what is not told is the truth that we need to discern from what is told. This is the future envisioned by Panda and what is not told in there is the artist’s point of emphasis. A poet is a person who turns his attention to the places from where the weeping noises come up. Panda, like poet leaves a lot grey areas where he knows the weeping people could be found in the future.
Posted by JohnyML at 4:11 PM