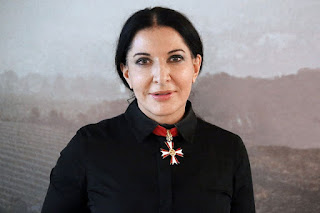 On 23rd September 2018 in Florence, Italy at the Palazzo Strozzi, during a book releasing ceremony on the occasion of the world renowned performance artist, Marina Abromovic’s major retrospective exhibition, another young performance artist from the Czech Republic attacked Abromovic with a portrait of her allegedly painted by the assailant himself. The man was immediately overpowered (as the video grabs of the incident show) and the lady escaped unhurt. In the post-truth world even the sincerest of protests could be seen as a publicity stunt but when it comes to Abromovic anyone in his/her right sense would not believe that she needs any kind of publicity stunt that involves a physical attack on the artist herself. Abromovic, who is known as the ‘grandmother of performance’ art (the term ‘matriarch’ may be reeking with the smell of a binary that even her direst of critics wouldn’t like to attribute to her. Grandmother, the affectionate term not only qualifies her authority in the field but also positions her as the pioneer in/of it) has done enough acts that extended, tested and problematized the enduring capacities of human body and mind. She does not need an external attack on her body in order to grab eyeballs from the art scene in Italy, especially a place where she had performed her six hours long performance piece titled ‘Rhythm 0’ in which she had let her body to be vandalized by the audience. 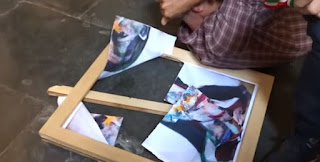 (after the attack on Abromovic)

I do not know too many details about the man who had attacked Marina Abromovic. However, I would like to see his act as a referential act devoid of any kind of reverence to the artist. The reference should be to the performance titled ‘Rhythm 0’ done in 1974 in a studio gallery in Naples. Forty one years have been passed since then and the impact of that piece in the minds of the people/artists all over the world refuses to fade. This performance piece of hers, devoid of sentimentalism of any kind stays in the annals of art history as a pivotal work of art just like Marcel Duchamp’s ‘Fountain’ (1917). Any conceptual artist today cannot overlook Duchamp for his cleverest of acts of bringing a readymade into the gallery context. Today, anybody who goes for an object based conceptual art has to pay tribute to the temple of Duchamp for one cannot have an object which is not a ‘readymade’ in one or the other sense. A act of performance art anywhere in the world auto-creates resonances with the performances of Abromovic for her sheer diversity of acts using her body as the lone tool. Hence, I would say any artist who uses his/her body owes a bit to the body of Abromovic, obviously the story-telling and ever benevolent grandmother. 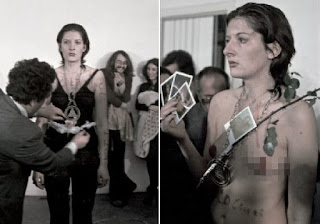 The man, the assailant, while attacking Abromovic was in a way paying tribute to the master performance artist, the genius of body based art and obviously was making a reference to one of her earlier works. The attack in itself could be seen as a ‘performance’ which was not meant to hurt the artist. Had the supporting wood hit her head it would have caused grievous head injury to the lady is another matter, which had complicated the matter, in a way transporting it from the aesthetical realm to the realm of criminal acts. While once again testing the enduring capacity of the human body and mind, as claimed by Abromovic herself almost forty one years back, the assailant was making a point that a performance, however ephemeral and anti-establishmentarian it remained in a given context, in a different time and space the possibilities of it being read differently were more. The six hours long violence in an absolutely uncontrolled (self-restraint of the audience was the only surety that Abromovic had when she placed seventy two items of assault including feathers, needles, razor blades, knifes and even a loaded gun) might not have caused serious injuries to the artist as she stood there abnegating her selfhood and subjectivity, rendering herself into an object to be acted upon. But a portrait of the artist done by the assailant, which became a weapon of assault could be read as ‘this’ artist’s effort to reclaim her subjectivity, the very subjectivity which he tested against her real personal subjectivity in the act of assault. 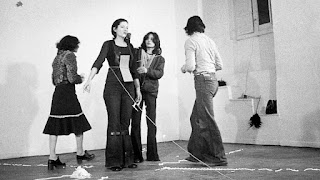 By thrashing the portrait on her head, the assailant partly annihilated the ‘created’ subjectivity of Abromovic (in this case, the canvas portrait of Abromovic done by the assailant, and in the case of 1974 act of Abromovic, the ‘object-hood’ that she temporarily created as her ‘subjectivity’ in the gallery premises) as she had wished in her original performance by causing not so insignificant hurt on her body. The assailant has emulated the same semi-serious hurting act in his attack; the only difference that we could cite for changing an aesthetic act into an act of criminality is that he had not given any intimation to the artist that he was going to do something of that sort. While Abromovic’s original piece was done in a controlled atmosphere where artist’s willingness was all the more important that had driven the whole performance for six years, here the atmosphere was different controlled and was not expecting any attack on the artist. I am sure, given all these the performance artist in question can be given a let go only by Abromovic herself provided she sees the man’s assault as a genuine piece of response to her oeuvre and a originated out of a negative reverence. 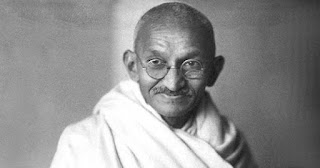 This is where I remember Nathuram Godse and Mahatma Gandhi. On 30th January 1948, Gandhiji was on the way to his evening prayers at the Birla House in New Delhi when Godse pulled the trigger at him. Godse, it is reported that had reverence for the Mahatma but he did not like the way he tried to interpret Hinduism. He suspected that by helping the Muslim community in India and the newly formed Pakistan Gandhiji was eroding the cause of the Hindus, who Godse thought would meet with its demise if Gandhiji was allowed to speak for the Hindus. Gandhiji’s life was an ensemble of performance pieces, carefully designed and performed by the Mahatma himself. Godse was the also a performance artist in that case who was taking the Mahatma’s own reference to bump him out. A chill went through my spine as I read the post attack statement delivered by Abromovic in the media. It read: “The man came up to me looking into my eyes and I smiled at him thinking that he was giving me a gift… In a split of second I saw his facial expression change and he became violent, coming towards me very quickly with force.” Doesn’t it sound eerily familiar in the context of Gandhiji’s assassination?