Banksy, the Most Willing Player in an Infantile Game, ‘Going Going Gone’ 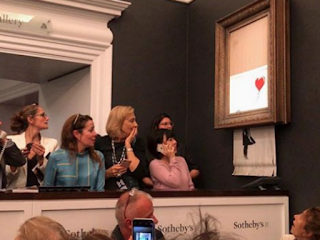 A stunt is a stunt is a stunt. Banksy’s ‘Going Going Gone’, the shredding stunt at the Sothbey’s last weekend auction should be taken as a stunt well planned, well executed and well discussed. A stunt gains its due mileage when its impact reaches the maximum number of people and Banksy, as usual should be cheering with the masters of the auction universe for the expected results. A print of the famous ‘balloon flying girl’, a piece of thought provoking graffiti work had gone for an estimated price of $1.36 million before it got shredded into pieces by a shredding appendage hidden inside a ‘clumsy’ frame. I am not here playing a myth-buster for the myth around the ‘Going Going Gone’ work (an instagram notification by Banksy himself) has already been busted by many. But the question I want to raise here is simple: Is there any myth at all behind this stunt that shredded a ‘print’ of a work of art whose original was originally made to defy and lampoon the art market?

Banksy’s transformation from an invisible/incognito graffiti artist, a sort of space snatcher or space occupier to the darling of the auction market has been gradual though unsurprising; it is bound to happen to any products including the cultural ones as they are destined to be dragged into the existing value system which as of today is determined by monetary value therefore are liable to be a part of the market system whether the producer of such products wants it to be so or not. Banksy’s anonymity becomes questionable mainly because of this market intervention; it is disputable whether market made an intervention into his life and art or it was Banksy who pulled the strings in such a way that the market wouldn’t have stood and stared. Banksy today is an industry (the products of which could claim a higher price for their scandalous value as the whole affair is based on scandalizing the social norms, which at the height of capitalism becomes the real norms that goad the affluent and callous indulge in such lascivious sports like pillow fighting a la Fellini’s La Dolce Vita) and industry has to have myths to prolong its own life and that of its products. 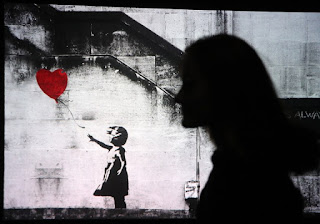 Myth making a part of any industry (any film star shedding a few kilos for a role is one such myth though a part of it could have an iota of truth in it). A myth becomes a believable myth only when it has some bit of truth to spice it up. That microcosmic truth in a macrocosmic lie/myth helps it to perpetuate itself in rational and believable terms as a myth is always seen in a predetermined perspective; rather the truth is that the myth has often only one perspective to retain its awe. The moment it is interpreted and critiqued from a different perspective, it not only bursts the myth in question (demystifies it) but also nullifies all the claims built around it. A nullified myth is as valueless as a tattered gunny bag that is still a bag but fails to hold anything substantial in it. Therefore, any myth in any industry conveniently discourages demystification efforts by critics by almost annihilating their status and career (remember what happened to Khalid Mohammed, the film critic and writer). The only unfortunate thing that happened with Banksy, the anonymous artist is this that he became a part of the game that keeps the already busted myth on.

The Banksy myth is an economic necessity for the art/auction world and it is at the same time a cultural necessity for the might land of Britain. Banksy being a British artist (that itself is an anachronism as an incognito artist need not necessarily be a ‘British’ artist by origin; he could be an accidental Brit operating from the United Kingdom), it is the responsibility of the state of Britain to take care of the myth. Though Banksy had started off as a nuisance/a threat to the public morality who vandalized the sanitized public spaces, after few years, with the growing respect that he has been gaining from different parts of the world (from New York to the War destroyed Gaza strip), it became the responsibility of the state to keep the mystery shrouding the Banksy legend intact. If the British Police say that it is clueless about Banksy, despite its claims to have arrested Banksy in various occasions, then we should doubt the mystery solving abilities of such an efficient policing system, which is supposedly one of the best in the world. 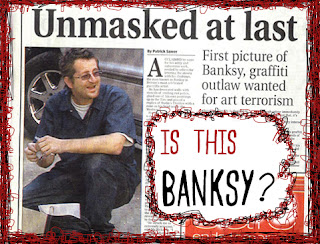 The economic world/the corporate world and the political world are playing hands in glove in protecting the Banksy identity thereby perpetuating the myth. I do not know whether the United Kingdom gives its citizens a sort of constitutional right that allows one continue the life of anonymity. Many of the musicians have stage names and also a sort of fantasy life style but still they are real people who hold a passport and go through all the immigration procedures in the foreign lands with their real names and real personalities. How can we think that Banksy remains incognito and lives among the people without ever raising suspicion even of a security guard? (Someone at the Sotheby’s auction venue was gushing that Banksy should have been around while his painting was getting shredded. Someone could even say that the trigger was even pulled by him. The most imaginative ones could say that the Banksy himself must have been bidding for his works.)

As an art critic and historian, I do believe in the works of Banksy; but I keep asking this question, had it not been the mystery around his personality, would his works have raised the curiosity quotient among the art loving people all over the world? Banksy has been instrumental in making graffiti art fashionable and I always see his parallel in the rapper Eminem who adopted rapping and made it big more than Tupac, Biggie, Ice Cube or 50 Cent could do. As Eminem gave rapping both critical edge and social acceptance, Banksy took graffiti art by force from the Black radicals and aesthetically polished it and added the much wanted mysterious quotient with an incognito signature. While the graffiti vandalism of the Black and the Punk invited punitive actions, the graffiti of Banksy raised curiosity for its sophisticated aesthetics that played up visual pun and black humor. While Banksy kept the steam of socio-political critique on in his graffiti, he took off the violent edge of the vandalizing types of graffiti. Basquiat had transported graffiti to canvases and Banksy took the route of public walls to reach the conventional canvases. 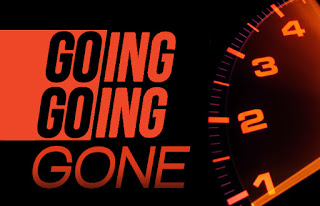 The gasping in the auction house upon seeing the shredding of the canvas by Banksy was choreographed and controlled. It was a controlled implosion as we had seen in the collapse of the twin towers, minus its calamities. Yes, as disaster capitalism always does, the collapse of twin towers resulted into the destruction of the countries elsewhere which paved the way for the realtors to spread their foot prints all over those countries, the shredding of a work of willingly by the author himself in fact has increased its price by several folds. If it had been taken for One Million Pounds, Banksy later claimed five millions for the shredded work. The whole affair is a classic example of poetry as willing suspension of disbelief. All the players willingly suspend their disbelief and pretend that it was a ‘prank’ played by Banksy himself. But they do not accept the fact that it was a prank well-choreographed and played by all the parties involved. May be that is what we do today, like children playing the game of invisibility. Some children decide to make one of them invisible and pretend that he is not seen at all even when an unsuspecting child says that he could see one; or otherwise, they pretend they someone when there is none. This game in the auction house takes the art players into a state of infancy where they are willing to make someone visible or invisible. The game is all fun so long it yields millions of dollars. And Banksy is the most willing player of all in this game.