Inking His Way to Khairagarh’s History: Akshay Seebaluck and Inktober 2018 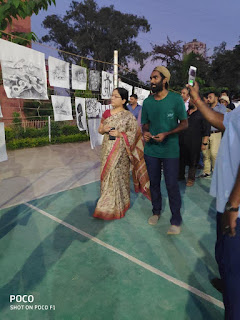 Akshay Seebaluck should be a happy artist now. Inktober’s Khairagarh chapter, initiated by Akshay himself was a huge success and it has given a necessary shot in the arm to the Indira Kala Sangeet Viswa Vidyalaya (IKSVV), Khairagarh. A humble beginning it was as most phenomenal successes in the history of art are and today the IKSVV says that it would ‘fund’ Inktober next year. October 2019 is far away and Akshay is a final year MFA student, ready to spread his wings in the heavens of world art. However, the seeds of enthusiasm in order to carry forward the Inktober brand have already been sown and a few students from the junior batches have declared their commitment towards the project. A post-Inktober project is already underway with another MFA final year painting student, Albert Srivastava in the lead, filling the white walls of the campus with soothing graffiti (note that the preferred color for the architecture here is brick red with broad white lines creating a sort of grids, imparting a sense of old time charm with a colonial twang). 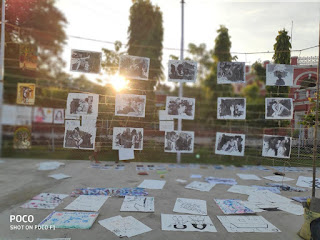 (During the display of Inktober Khairagarh 2018)

An international brand by now Inktober was initiated in 2009 by an American artist, Jake Parker, who in his website confesses the reason for this ‘art challenge’ saying that he ‘created it to improve his inking skills’. ‘Thirty one days and thirty one drawings in ink’ was the challenge and it was taken by artists from different parts of the world only to make it an international ‘virtual brand’ that happily gives away its franchise against certain hash-tags that lead any such effort back to Jake Parker. When Akshay took up the project, he only knew that he could source the required number of ink works from within the college itself. Man proposes but mates dispose. Akshay did propose this idea to his friends who initially gave him a lukewarm reception. Supported and spirited with Debashish, Abhinav and a few other friends, Akshay went on with the project. He wanted someone else to be the curator of the project so that he could spend more time in organizing the works for the display. However, as the consultant curator of the project (this responsibility was placed on my shoulders for myself being their art history professor) I asked Akshay to bear the cross by doubling himself up as a curator-artist. 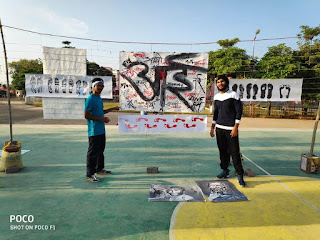 Social media was successfully put to use in spreading the word and at least fifteen foreign artists promised to send their works. However, during the initial days the morale of Akshay was a bit sagging as the students’ participation was not coming as expected. It was where Akshay’s curatorial instincts started working well. He took a few friends devoted to the cause to the neighboring villages (where Akshay has been a familiar face during the last six years of stay in Khairagarh as he has the habit of going to these places for doing live-sketching) and invited the village kids to do some ink work. Initial hesitation gave way to tremendous amount of mischief and play. At the expense of a few sheets of paper and a lot of ink Akshay and team came back with bundles of works of art created by children, who came in hoards with their parents for the grand opening of the Inktober Khairagarh 2018 with their parents and a lot of smiles. If villages cooperate can cities be far behind? Like poems works started streaming in. 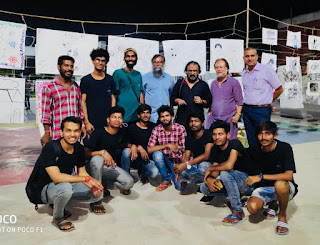 (Akahsy Seebaluck with team and teachers during the opening of Inktober)

Yves Klein, during his lifetime, had not even thought of India though he was very much interested in Japan and Chinese martial art practices and Zen Buddhism. But at some stage Akshay met Yves Klein in his ink path and then everything turned for good. With the absence of female models available in a conservative atmosphere of IKSVV, boys at the hostel decided to volunteer themselves as ‘live brushes’ with Akshay and other gleefully clever ones playing bits of Klein in their own selves. Inks of various shades were smeared even to the remotest of body spaces with an intention to get the prints of those spaces on paper. While during the day these boys worked at different fine arts departments, at night they turned the corridors and common hall of the boys’ hostel into impromptu performance spaces where they drew in ink and did body performances with each one coming forward to eternalize their bodies with an ink print. Walls have ears hear; the news of ‘live brushes’ reached the girls’ hostel on the other side of the campus and soon there too while everyone slept live brushes came alive. During the display on the basketball court, anticipating protests from the hopeless fundamentalists from the streets, the girls put only one condition: “If they ask to remove our body prints, make sure that the boys’ body prints are removed as well.” Ek chuttki ink ki keemat tum kya jaano; girls dare to browbeat the invisible moral police here- yes, this report is from erstwhile conservative Khairagarh. 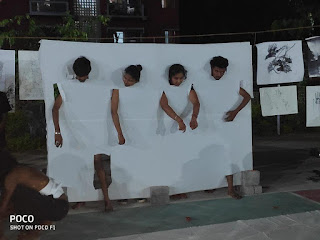 (from a performance at the opening of the Inktober, Khairagarh 2018)

Akshay did a good job in his display strategy. Keeping his consultations on with me, he went on to develop a volleyball netlike structure using locally available jute threads. In two nights’ time, he created the jute mesh which became an extremely pleasant and innovative display wall, transparent and ‘desi’. Around six hundred works were on display; with no theme binding the artists they had created an array of works that expressed their mildest to wildest of fantasies. Some showed extreme skills and some showed extreme sensitivity. Some were academic in approach and some were absolutely professional. The live brush works did invite a lot of curiosity but everyone’s sentiments remained unhurt. Two performances celebrating ink were done by students from Thailand and Srilanka. A few days before, Nikhil Tiwari, another MFA previous student from the painting department had already performed a complementary ink project titled ‘Even Odd One’. The professionalism of Akshay in executing and propagating the Inktober idea was visible even in creating a uniform for the volunteers (black T-shirts with Inktober logo at the chest and a line in way of explanation running along the spine). During the opening, Akshay carefully chose to wear a T-shirt but green in color, coding him distinct as the curator-artist. One had to say, yes he had worked for that distinction. The Inktober Khairagarh 2018 was inaugurated by the Vice Chancellor, Prof.Mandvi Singh in the presence of the Dean of Fine Arts, Prof.V.Nagdas, Pranam Singh and other department heads. By the end of the project, Akshay’s bank account is around Rs.15000/- minus but his happiness balance is good enough to sustain him for another year. Perhaps for the first time, a student project was widely reported in the local editions of the Hindi Newspapers.