The Importance and Problem of Being Tayeba Begum Lipi 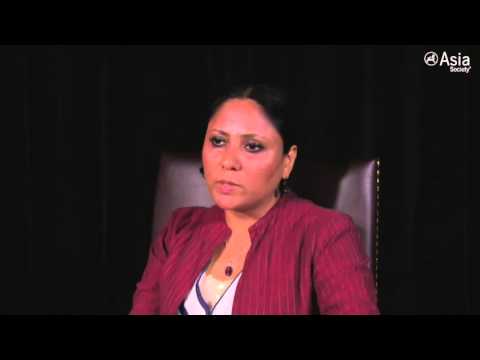 
Internationally acclaimed artist, Tayeba Begum Lipi could be Bangladesh’s answer to India’s Subodh Gupta. That definition is possible and viable only if we take too much pride in our nationalisms. When I look at the works of Begum Lipi at the Shrine Empire Gallery, New Delhi, in her minimal solo show titled ‘Reversal Reality’, I am reminded of our own Subodh Gupta not because her works resemble Gupta’s works or aspire to become those works by any means, the feel that exudes from those works somehow calls for drawing such a parallel. Both of them work with familiar materials and build up monumental and exaggerated structures out of them. While Gupta’s works play up some kind of domestic passivity, Begum Lipi’s works do speak of public activity. Gupta does not speak up for or against any class or gender as his works address the international audience with some sort of exoticism and eclecticism to support them. In the meanwhile Begum Lipi speaks up for the hurt class of the society; women in Bangladesh and all over the world. I think, I should leave Gupta there because he should not be a parameter to judge the works of other contemporary artists though I myself have recently used this parameter to discuss the works of another Indian artist. In that case, the promoters of that artist themselves had drawn the parallel with Gupta, but here in Begum Lipi’s case it is the feel that you get once you enter the gallery. But then it is a habit that one has to outgrow. 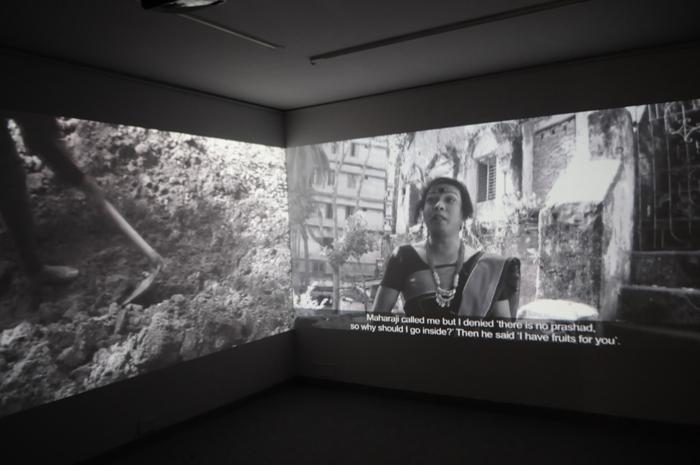 ‘Reversal Reality’ is a continuation of Begum Lipi’s ongoing engagement with gender issues and the materials that could be converted into art. Belonging to a sort of Mona Hatoum school of expressions, Begum Lipi started off career in Bangladesh as a painter. Soon her interests moved from the painting materials to other possible materials that could be employed in the making of art. The move to shift mediums should be hailed as a very decisive moment in the career of many artists as that particular move in fact makes or break their careers. Many artists who do installation and assemblages or multimedia works today had been once proven to be bad at painting and sculpting. Many illustrious contemporary artists today would shy away from their former conventional medium works as those just do not reflect the kind of verve, passion or flamboyance that we see in their works today. Seen against this context, Begum Lipi’s decision to move from painting to sculpting or installation must be considered as a very positive move. Begum Lipi is known in the international art circle not only as an artist but also as an organizer and curator; she is co-founder of Britto Art Trust and was the commissioning curator for the Bangladesh Pavillion in Venice Biennale 2011. She has already got a few museum shows to her credit. And a glance at her previous works says that she deserves the accolades that she has amassed so far. 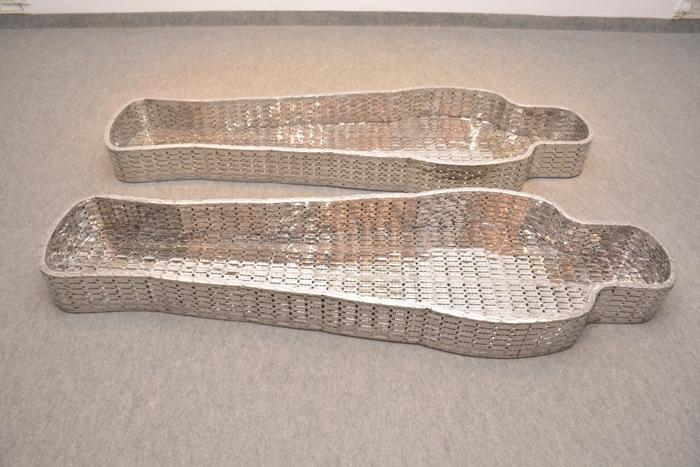 However, when I look at her works at the Shrine Empire Gallery, I think that activism could sometimes produce bad art; if not bad art, loud art. The subtlety of expressions, whatever may be the size and scale of the work in question, is what makes a work of art worth desiring and worth looking. In Begum Lipi’s presentation here in the show titled ‘Reversal Reality’ that subtlety is lacking in the major works. The smaller works are exceptions to which I will come back later. The pivotal series of works that justifies the title of the show is a deliberately drawn parallel between the life of the artist and the life of a transgender personality; Anonnya. The word meaning of Anonnya is doubly important because the transgender woman in question was a boy once and he had a different name. Anonnya is a chosen name after his conversion into her and the word means ‘Unparalleled’ or unique. Anonnya is unique because she is different from the artist or from us. What catch the attention of the artist are the childhood memories. Begum Lipi and Anonnya are contemporaries and the disparities between her own experiences and Anonnya’s experiences disturb the artist. Hence, she draws a photographic parallel between their lives; how he has spent her boyhood days and how she has spent her girlhood days. And eventually we reach a two screen projection of two videos that run parallel to each other. In one of the projections we see the artist digging a grave with her own hands and in the other we see Anonnya speaking of the trials and tribulations of a transgender woman in this conservative world. The artist seems to say that social disparities have dug up a chasm between them and now only the death could level their social status. The artist makes even a pair of caskets (which is wrongly spelt ‘cascades’) made up of customized steel razor blades welded together. These coffins are going to be their final abode, which would eventually equalize them. Even in death, their memories would be hurting as the caskets are made up of razor blades. 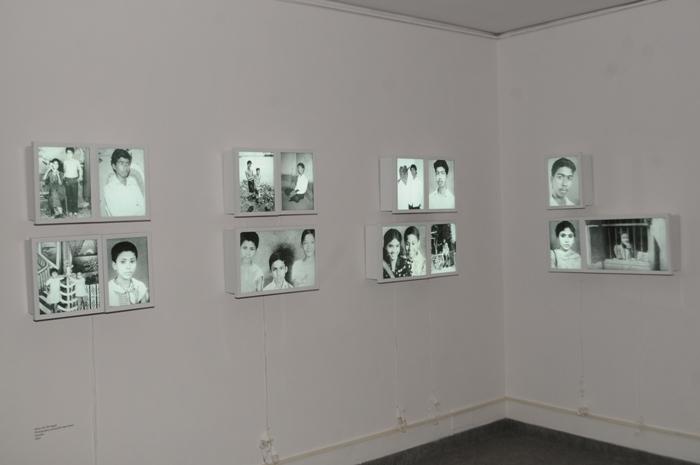 (When the Life Began, by Tayeba Begum Lipi)

The important question that one needs to ask here is how one could elevate a documentary into a rarefied visual art work within a gallery or exhibition space. Could a two channel video projection with one channel playing a documentary and the other playing a performance make it a work of art? Or the blending should happen in the eyes of the viewer? What happens if the viewer is so familiar with this kind of queer discourse and does not give much importance to the performance part? Or what happens if someone is so brash that he/she does not want to even look at the documentary part of it? For me, a person who has read the autobiographies of transgender people like Revathy and also has seen a lot of documentaries and documentary photography on the lives of transgender people (I would like to cite the works of Abul Kalam Azad and Chinar Shah in this context), this documentary on Anonnya’s life looks quite familiar. But when seen it as being played parallel with the grave digging performance of the artist, I think that gravity of both the acts is reduced to dust. I would have taken the grave digging act to Shakespearean levels had it been looped alone. I would have taken Anonnya’s renditions of her life very serious had it been shown in a single channel projection. I have to say that Begum Lipi’s video work and the photographic works somehow fail to impress in this context. 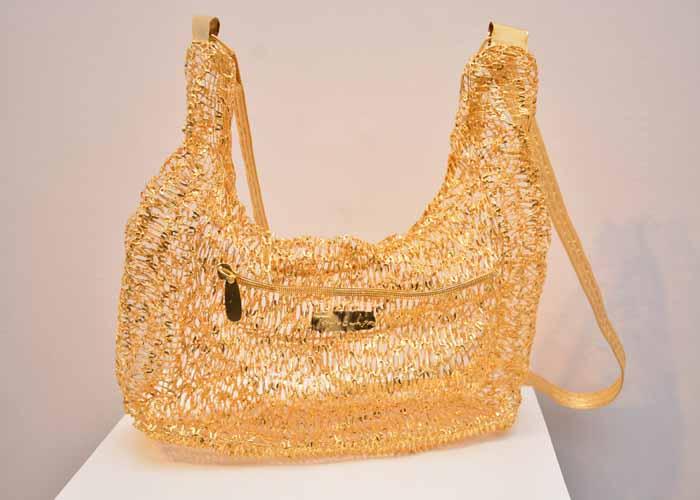 However, when it comes to the smaller works in this show Begum Lipi does not fail impress or surprise. A couple of works made out of gold plated brass safety pins welded together into a handbag and a pair of slip in shoes ( I really do not know what those shoes are called otherwise) are really eye catching , soothing and meaningful. They are two intimate objects that women generally use and the golden sheen is not devoid of the threat that it implies because the safety pins are sharp and are a daily tool of binding for women (that helps women not only to hold themselves together but also it becomes handy in poking back at the probing hands in crowded places). Somehow, looking at these works I am reminded of the works of Jaipur based Surendra Pal Joshi, who has made curtains and helmets out of customised steel safety pins (of which the Helmet was on display in the recently concluded India Art Fair 7th Edition in Delhi). These works of Begum Lipi look more impressive and subtle than the other feminine objects that she had ‘fabricated’ out of customized razor blades. These blades are not industrially produced useable blades, therefore I should say the ‘sharp edge’ is slightly blunt here. The real sharpness of razor edges had been on display in the works of Sunil Gawde (Sakshi Gallery) and Anant Joshi (Chemould Gallery) during the boom years. The razor curtain of Joshi and the razor garland of Gawde were really sharp and capable of bringing goose pimples to one’s skin. Begum Lipi’s razors, as they are not the original ones do not convey the sharpness as they should have been otherwise. 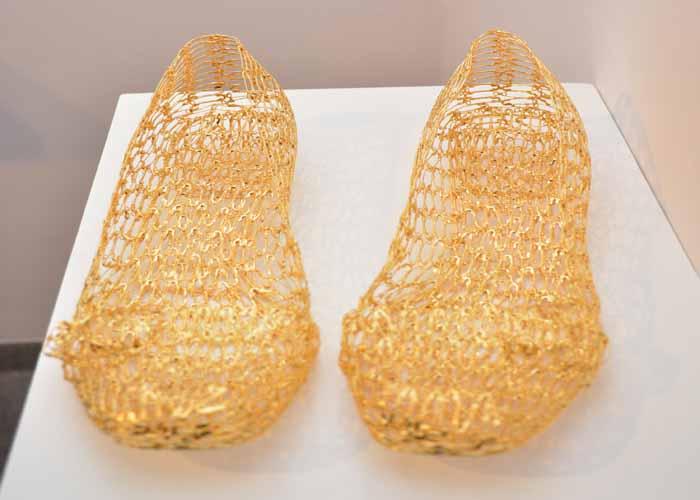 A wig made out of fine copper wires, titled ‘Wig’ is a catch of the show. One is thrown into a sort of confusion whether to see the rest of the blonde inside the wall or outside the wall. Where has the rest of the body gone, one may wonder; has she gone inside the wall or evaporated from the wall? This wig stands as an emblem to all the women both eastern and western who have been vanishing into thin air even when they are alive. Their presence is not noticed or even when it is not noticed it is done for wrong purposes. Internationally blondes are considered to be dumb sex objects and by creating a blonde wig out of copper wires, Begum Lipi not only has underlined the vanishing acts of our women but also she has taken the courage to question the western world’s stereotyping of women into blonde sex objects. In another work, by now familiar with the narratives of Begum Lipi and Anonnya, I could see the plaster/fibre cast of the faces of the artist herself and Anonnya. They are like death mask that we see in the novels of Dan Brown. One would almost look out for some inscriptions on these masks but what one sees is the blank grey of death. In the audio track that accompanies the masks play out some initiation song in Bangla which I am not able to understand. 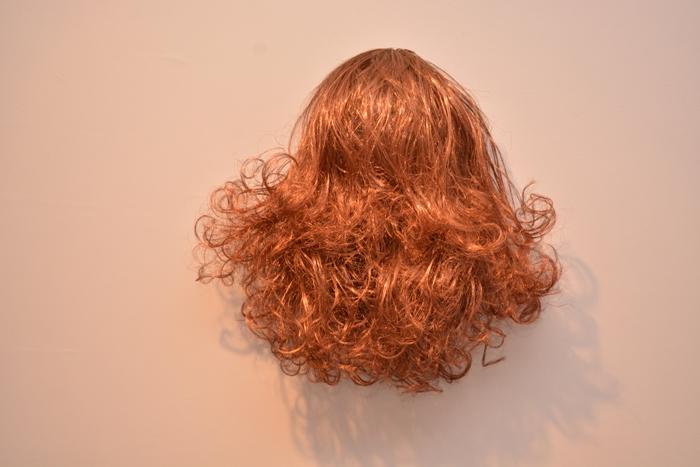 (The Wig, by Tayeba Begum Lipi)

The show as a whole speaks of life of Anonnya and also speaks of her death. Her slow death in the hands of the society is resonated in the life of the artist. She finds a reflection of her own self in Anonnya’s life and also finds her own death in her death. Here the death of both the protagonists is a metaphorical one. But it sharply reminds us of our own deaths. It is almost like looking at two people who have let their lives open to debate them with the sharpest tools available (as in an Abromovician act). It hurts when one sees it alone in the deepening gloom of the gallery space. I wish the Begum Lipi could have reconsidered the projection size and projection strategy of her video considering the small space of the gallery. Sometimes, small screen makes sense. Small lives definitely make sense as in the case of Anonnya but at times it needs Begum Lipi who has made it big out there in the big bad world. Anonnyas in the world seek agency of people like Begum Lipi, till they acquire their own mediums of expressions other than clapping, singing, blessing and cursing. The show is a memento mori; the good things will perish, so are the bad things, but the vignettes will remain, constantly telling us to stand and stare, if not for meaning, at least for knowing our own nothingness. 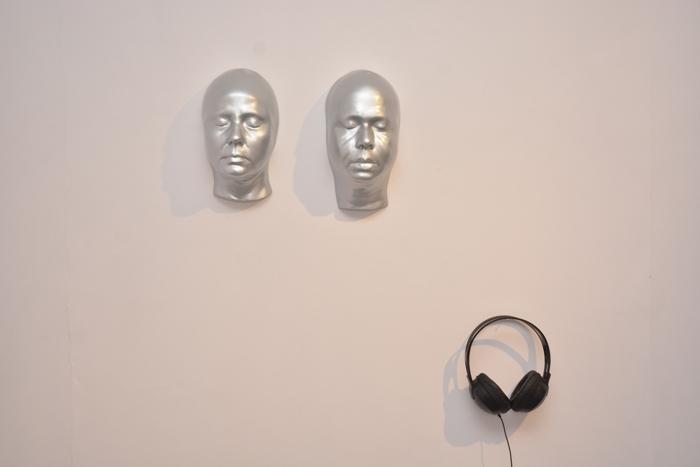 (The Lullaby by Tayeba Begum Lipi)

The article is over. This line is just to balance this image. JohnyML
Posted by JohnyML at 7:08 PM