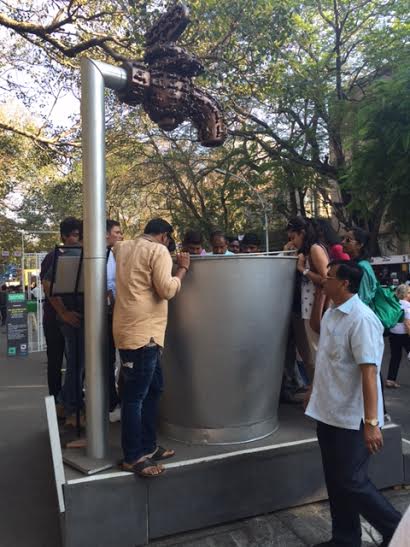 
Citizens of Mumbai have become Japanese or they have come of age. You may ask why. Japanese tourists, with no intention to hurt their sentiments, it is said that they see things and people through their cameras first and enjoy them when they download it into their computers. Physical location does not matter much to them as they are well capped and often travel by customized Volvo buses. Whether they are in India or France, they see things through their viewfinders. The reason may be that their country produces the maximum number of experimental digital cameras. But gone are the days of clicking pictures and downloading them in computers. Today, we all click pictures and whatsApp them or upload them directly into the social networking site pages. In the age of smart phone cameras and hundred different applications a work of art remains scandalously reproducible. 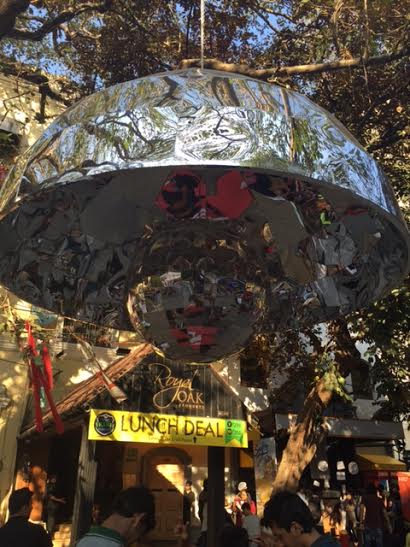 If the visual art section of the Kala Ghoda Festival 2015 could be defined in one sentence, then it would read like this: Twenty odd art installations multiplied by innumerable digitally stored or transmitted pictures of it from various angles. As we walk in to the Rampart Row area, beyond the main parking lot, after crossing earnest looking but ill paid security guards, a staggering number of mobile phones appear and we have to duck in several places as if we are caught in a cross fire between two armies who for the heck of it fight with invisible beams for bullets. I look for art and everywhere I see people standing in front of curiously shaped objects mostly with glittering surfaces, taking pictures relentlessly. Nobody seems to be seeing art on the contrary they are turning works of art into some props so that they could get photographed against it. Is it a problem? Does this act of people affect the effect of works of art displayed there? I do not think so. People seem to be enjoying the spectacle around them quite a bit. When people enjoy the works, either as aesthetic objects or useful backdrop properties, we should say public art projects like the ones that we see in Kala Ghoda Festival serve the purpose. But... 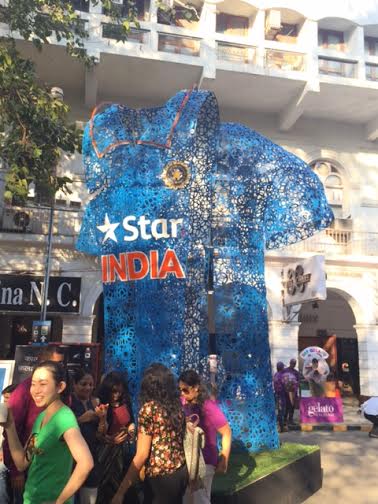 That ‘but’ is the real problem. Kala Ghoda Festival is in the mind map of Mumbai citizens. They deem it as their festival. Though there have been certain disputes about conducting this in the recent times, surmounting all obstacles it has come back once again, bringing joy to many. But....Okay, Kala Ghoda Festival is not a hundred per cent fine arts program. Visual arts or fine arts is a part of it. It is a three sixty degree platform where all finer aspects of life including literature and cooking are showcased. Theatre, dance and music are other integral parts of this festival. However, as an art critic, my focus is on the visual art project. With all due respect to the organizers and the artists who have worked behind this festival, I should say that none of them are up to the mark. As artists and art critics, we all have set some aesthetical parameters so that we could measure up whatever we see around in terms of art. Kala Ghoda’s Visual art section disappoints and it disappoints absolutely. 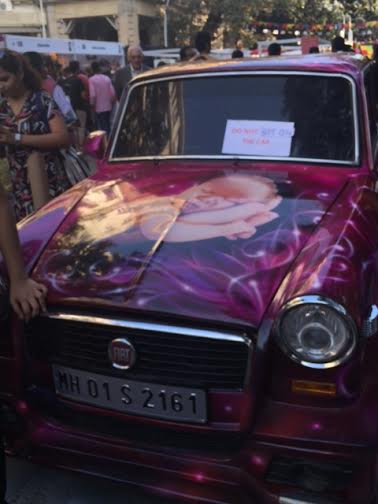 First of all, the visual art section, which is supposed to showcase public art projects, unlike in the previous years are too shrill and they wear slogans in both their sleeves. Each of these works is designed and displayed there for ‘conveying’ a message. Art, for someone behind the scene, seems to be a thing of advertisement. It should speak out a message. It should make people see and ‘read’ the message than thinking about it. The general expressions that runs around the topics like ‘touch’, ‘frame’, ‘cleanliness’ and so on, seriously and playfully act out their roles in various familiar and curious forms. Brinda Miller’s collaborative work with Vikram Bawa and Vikram Arora brings a smile to one’s lips as it is a huge bucket with a tap over it made up of small little taps and a video of dried out taps playing inside the bucket reminds one of the major works by another artist we have seen elsewhere. But the problem is not in similarity or familiarity but the naivity that the artists have approached the problem of water shortage in Mumbai. It does convey the idea but if you look at the work of Atul Bhalla who had clicked the pictures of all free water supply taps, air coolers, manhole covers and so on, we come to know how much sloganeering this work has. The comparison occurs when someone artistically presents an issue without resorting to illustrating the same issue. Then it becomes advertisement. 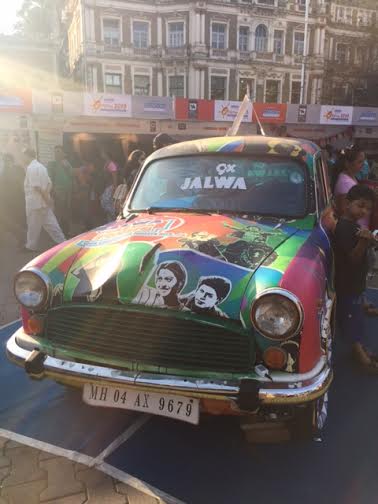 Advertisement is the catchword. Most of the works seem to have an advertising edge to it. It could be a widely circulated newspaper in the city or a popular television channel, it could be a widely recognized and respected nature and world magazine or some educational institutions in Mumbai and elsewhere, in everything you could see an element of advertisement. May be this is how Kala Ghoda Festival gains its funding. But when it comes to art, I do not think such a pitch on advertising is really needed. There are feeble attempts at art. For example, a Fiat car, which has been a staple ingredient in the daily life of Mumbai for a long time, is given a dream makeover. Doesn’t it look like a description of a Bollywood movie song property? Then you have a pushcart with wings. Hmm..that is slightly pushed and pulled aesthetics, but unfortunately it does not work. Then there is a camel made out of gunny bags. That has a mela interest, but no aesthetical appeal. The national anthem installation looks more like a Doordarshan set than a work of art. There at the parking area too in the midst of innumerable stalls that sell trinkets, shawls, kurtis and sarees, there is an ambassador car jarringly painted over by images from Indian popular culture. 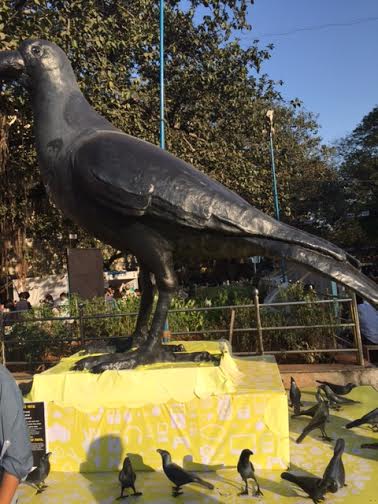 There are two works that I would cast my vote for. One is ‘Ek Hota Kau’ (once there was a crow) by Sumeet Patil. This set of installation with the avian images impresses though it looks a bit like a piece in a natural history museum. This sculptural assemblage could tell you the story of a survivor bird. It survives playing the roles between scavenging and messaging between the hither world and the nether world. While all the other species of birds slowly go hiding or fading as urbanisation grows steadily, this bird shows its survival instinct by being there all the time, just like a Mumbaikar. This bird is like a man in the streets of Mumbai. He could survive by the sheer force of will. This crow is like the legendary Jimmy Cliff’s ‘Harder they Come’. The other work of art that impresses me is a sliced up Ambassador car by Hetal Shukla. I prefer to avoid the convoluted title ‘Amby-Sad-Err’- the title simply does not make sense. However I am impressed by the presentation of it. It is cut into two halves, just as Damien Hirst had cut a pregnant cow into two, and are kept in two vitrines. Though the formaldehyde is missing from the tubs, the halves have their spongy hide intact on them. It could be a quirky take on Hirst using one of the socio-cultural-economic and transport memories of the Indian collective mind. But I wish it could have been exhibited better without the cool spray graffiti over it, which has almost killed the effect of the work. But it is much better than the 9X Jalwa Amby at the other end or the spruced up fiat next to it. 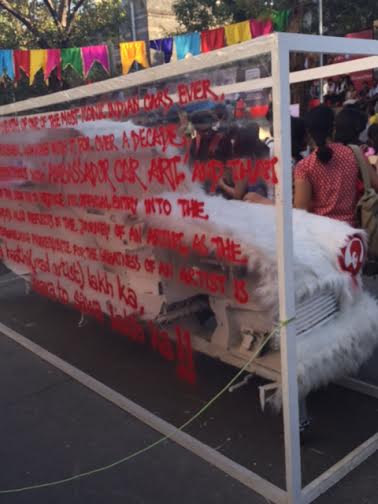 It is high time that the organizers of Kala Ghoda Festival think about the visual art part. The works of art displayed there could be really spectacular but they need not necessarily be advertising types. Works of art, even if they are public installations, have some kind of subtlety. It is not public art. It is a public spectacle with very limited sense of aesthetics. All that glitters is not gold. All what is shown in Kala Ghoda is not art. Next time, I wish the organizers would use much discernment in selecting the projects.
Posted by JohnyML at 8:58 PM