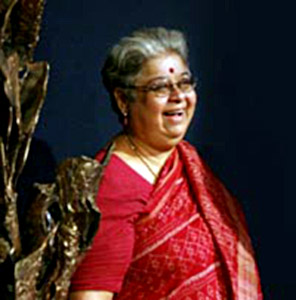 
Art critic, curator and writer, Girish Shahane was on the stage. The occasion was the Parashar Memorial lecture 2014. The new wing auditorium of the National Gallery of Modern Art was not in its full capacity. It looked more like a family get together than a memorial lecture though the topic of it was something very grave like ‘Plural Modernisms’. Girish was not in his elements perhaps because of the disturbances caused by the incoming and outgoing guests and the up and down running of family volunteers in their newly bought stilettos. He struggled a bit to make a connect with the audience but when he found that it was not happening, he went on with his talk which sounded more like a monologue than a spirited presentation. Exactly on the fourth row from the rear right entrance of the auditorium, at the aisle seat of the middle row there, sat Mrinalini Mukherjee focusing her eyes sharply on the speaker. I was at her right, in another aisle seat, taking a glance at her. She was like a huge bird that did not give any damn to the bird watchers. She was famous and respected but she did not carry that air around her. In fact she neglected most of her admirers with due cynicism in her eyes that lit up only for her exclusive crowd of friends that comprised of most of the ex-Baroda-ites. She puffed out her silk clad queenly arrogance from the cigarettes that she chain smoked. Elders gathered around her while the youngsters pretty much avoided her.

I was watching Mrinalini Mukherjee on that day as I could not follow Girish’s talk due to the constant opening and shutting of the door. As you open and close the door the dust settled on the carpeted floor of the auditorium gets disturbed. This had caused a few coughs from the audience. Cough is like a yawn. It is infectious and soon I found many people coughing to clear their throats. It was obviously not an indication of their boredom but when you are at the podium, trying to hammer in some ideas about plural modernism in the minds of the audience, a little cough or squeaking of chair would kill your enthusiasm. Girish was struggling to cope up with the situation. Mrinalini Mukherjee could not contain her coughing. At regular intervals she was coughing and now we were expecting anxiously during the silent intervals for her cough to start. I thought the cough was caused by the dust. Obviously it was. But Mrinalini Mukherjee seemed a bit tired and the chain smoking and over weight of the body seemed to have taken the toll. Taking pity on her, a young girl who was working as a volunteer and obviously a family member, almost resembling a fully decked Christmas tree, brought her a glass of water and politely offered it to Mrinalini Mukherjee. She looked at the girl tilting her head. There was a question in her eyes: Did I ask you to bring water? Though not eloquent, the question was sharp and now the girl was in a fix. Mrinalini Mukherjee was not ready to take any help from her. Finally she gestured to keep down the glass on the floor, which the already crestfallen girl immediately obeyed. Mrinalini Mukherjee did not touch that glass of water. 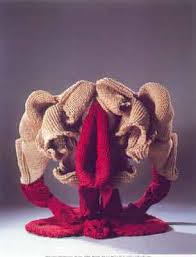 (A hemp sculpture by Mrinalini Mukherjee)

I saw the artistic arrogance in her and for some strange reason I was feeling happy. Mrinalini Mukherjee was an artist who held her head high, worked alone and lived alone. She did not want to receive pity or charity from anybody. Actually, I do not have intimate experiences or memories to write about her. When I came to Delhi in mid 1990s, I knew that there was one artist named Mrinalini Mukherjee living in the city and she was the daughter of the great master, Benode Behari Mukherjee and Leela Mukherjee. In one of those days, when somebody introduced us to her in an exhibition opening, she gave us a compassionate smile. That was all. Later on whenever she met me in the exhibition openings she just nodded in recognition. Over a period of time that nodding too was gone. Perhaps, Mrinalini Mukherjee never wanted art critics or art historians. Even if she had wanted them I did not belong to that tribe of art critics which she chose to work with. So I remained a common spectator than a member of her inner circle. I do not remember when I had seen her first solo exhibition, but I still do remember her works; the hemp works, which was a novelty at that time. She was a sort of detached artist who did her works in unconventional materials with a strange sense of eroticism.

Mrinalini Mukherjee belonged to that generation of women artists who got somehow de-sexualized by the art historians, critics and their contemporaries. In that sense, we could see that Nasreen Mohammedi, Rumanna Husain, Mrinalini Mukherjee, Nilima Sheikh and to an extent Nalini Malani and Navjot Altaf are not ‘gendered’ in their works. They were either ‘mother figures’ or ‘dispassionate commentators of womanhood’. Their bodies or their cultural bodies (as in their works) were not eroticised for critical reasons. It is not necessary to en-gender a woman artist’s body to create a feminist or feminine discourse around her body of works. But when their works of art are also discussed from within the sanitized zones of asexualization, then we should know that there is an agenda behind it. Amrita Sherghil and B.Prabha are not talked about with the same verve. When Shergil is talked about her sexually charged body was one of the markers to debate the aesthetic relevance of her works. B.Prabha, on the other hand is treated almost like she was N.S.Bendre. Similarly when we come to late 1970s and 1980s, these women artists are talked about more like social commentators than commentators who could talk about sexual parities, disparities or related gender issues. Nalini Malani in her early works and in her later video works takes a feminist position sans erotic connotations of the female body. Though sexuality is an undercurrent in all of their works, when it comes to critical articulation, sexuality is almost treated like a taboo. 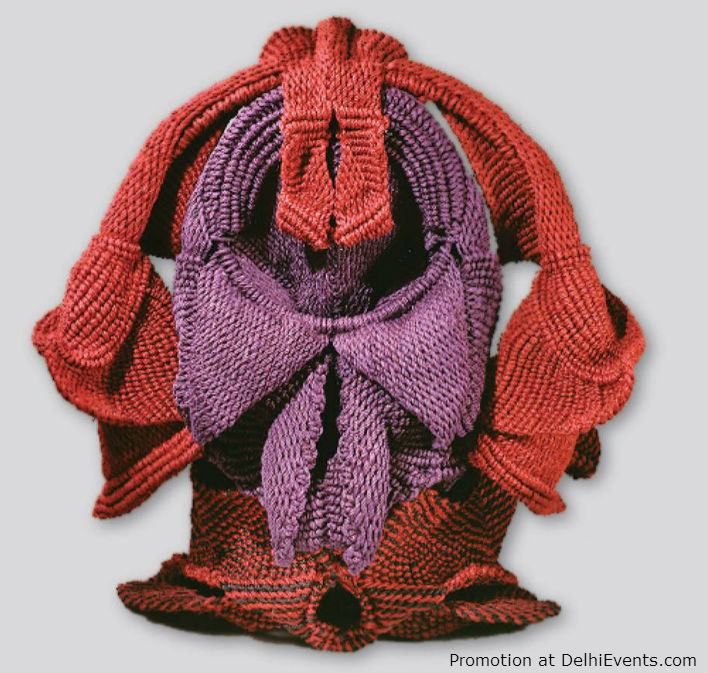 (A Hemp sculpture by Mrinalini Mukherjee)

Feminist critics could contest my arguments. But the truth is that even when we talk about Mrinalini Mukherjee’s works we end up in talking about sexually charged imagery in her hemp works and it all ends there. I do not know whether art critics or historians have written about her old and new body of works in the context of feminist or feminine discourse. Whatever I have gone through about her works generally talk about the tribal goddess, mother goddess and primordial vulva images and so on. I have not seen much why Mrinalini Mukherjee or in that sense Rumanna Hussain has articulated their own sexualities against the sexual stereotyping of women of their times. Rumanna Hussain is unfortunately got fixated as an artist who was primarily a Muslim, therefore a secular artist and she was more affected by her illness and social divides than her feminist or feminine position in the society. When people talk about Navjot Altaf, she is passed off as another male artist or someone who works in the line of Mona Hatoum without the daring aspect. If today Mrinalini Mukherjee’s works are limited to the understanding of hemp material, new bronzes, ceramics and hints at a strange sort of eroticism, the reasons for this should be sought in where these artists were protected from being called as feminist artists by historians. In India, critics seem to take permission from the artist before they call them a feminist or chauvinist. My experience is that most of the women artists I have worked with clearly tell me that they are not feminists.

Somehow, you may find it critically fallacious when I use feminism and femininity as critically interchangeable tropes. Feminism is not a discourse of femininity and vice versa. However at the same time feminist discourse cannot discount the defining feminine dimensions. While a discourse on femininity in exclusion could get away from feminism, feminism in itself cannot get away without addressing femininity. I have a feeling that Mrinalini Mukherjee is less understood or misunderstood because of this critical sanitization happened during the 1980s. I believe that the major critics and historians of that time were mostly looking at the works of the male artists and were making future provenances for them. Anyway, the new age art critics, art historians and critics could take up this angle for further debate. 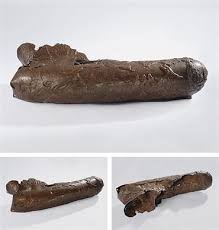 ( a bronze sculpture by Mrinalini Mukherjee)

I did not have any close relationship with Mrinalini Mukherjee. However I thought that I should write about her because I had seen an invitation from the NGMA inviting me along with thousands of others to a retrospective of her works. I was in another city so I could not attend the opening. And yesterday (2nd February 2015), at night around eleven o clock, I saw Sumeshwar Sharma of Clark House Initiative posting a condolence message on the demise of Mrinalini Mukherjee. I thought it was a prank as it came from Sharma who posts things that sounds prankish at times. I googled and found nothing like that in any news channels. But by today morning, it was confirmed. I remembered how she had expressed her wish to go for a long journey with one of my friends; a sort of road trip to do sketch and draw. Now she has gone to a different journey from where, they say there is no return. But who knows. Artists live on in their works and Mrinalini Mukherjee was an artist.