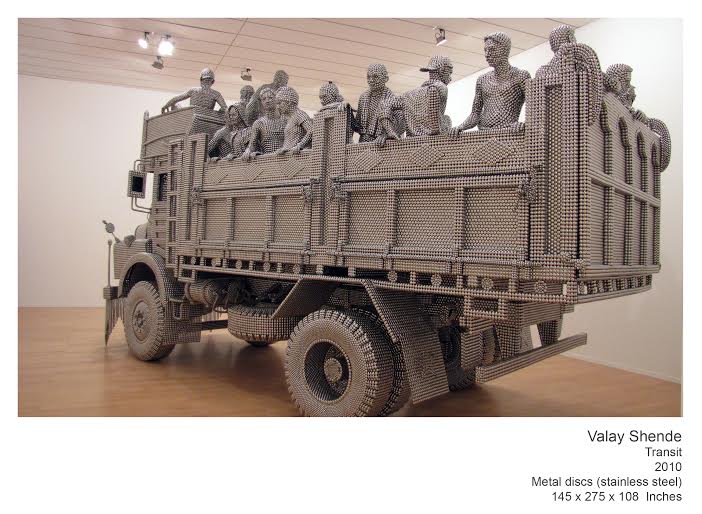 
Standing at the Art Plaza behind the main building of the Bhau Daji Lad Museum, Mumbai that houses the not so impressive collection of artefacts from 19th and 20th centuries (especially for someone who has seen extensive and expansive collections like Raja Dinkar Kelkar Museum in Pune), one cannot miss the life size Tata Truck and people standing in it, all made up of small identical polished metal discs. A closer look reveals that this mighty truck is fragile though it looks solid with closely welded discs together. Titled ‘Transit’, this is a sculptural work done by a Mumbai based young artist, Valay Shende, is a pivotal exhibit in his ongoing solo show with a somewhat lengthy title, ‘Migrating Histories of Molecular Identities’ in the museum. Presented jointly by the BDL Museum and the city’s Sakshi Gallery, this show is curated by Veeranganakumari Solanki. 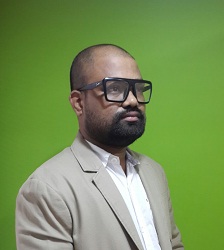 I am impressed by ‘Transit’ not because it is capable of giving a competition to Subodh Gupta’s or Jitish Kallat’s works but because it is overtly humane and subtly sensitive, and has given a new expression to the people who are ferried like slaves from one construction site to another; or to be precise from one concrete farm to another one. Urbanization in a way de-ruralizes a country. It is said that by 2030 CE, more than half of Indian population will be living in urban spaces. Making of cities, as said before, while unmaking villages, extracts the work force from its core and empties them of their energy and ability to survive. The work force thus extracted goes to the cities to embellish it with more concrete, glass and steel edifices and once on completion is shunted out to the fringes. In the interim phases of making of a city, these populations that constitute the works forces are moved from one place to another, one shelter to another or from one temporary tenement to another, leaving them in a permanent root-less-ness which causes poverty, illness and above all illiteracy amongst such floating populations.

Valay Shende captures one of those moments of impermanency. People are transported from one work place to another like cattle. Herded together they even lose the humorous poignancy that once Charlie Chaplin had presented as the opening shot of his illustrious movie, Modern Times. They are hopeless creatures devoured by the monster called urbanization, bringing the ruthless figure of Goya’s painting where the monster of revolution eats its own children. These urban fodders are not united under flags or unions and the air and sky that they inhale and witness while they are on the trucks like this one created by Shende are the only solace that they get while moving from one place to another. Shende raises the tableaux nature of the work to a different level by adding its rear view mirrors fitted on to either side of the driver’s cabin with the visuals of a highway that runs between two locations in a city or locations in different cities in the world. These videos, that simulate movement, add some kind of agility to the otherwise static sculpture. The more one goes near to the truck, the distorted images of one’s self multiplies into thousands of small disc reflections like distorted selfies, which none would like to post in the social networking sites. The works as a whole seem to tell us how ugly we are, the children of urban spaces, the rulers of urban spaces, the aestheticians of the urban spaces or the law makers of the urban spaces; we are all ugly and distorted. But the occupants of the truck look stately, defying our presence with their firm postures. 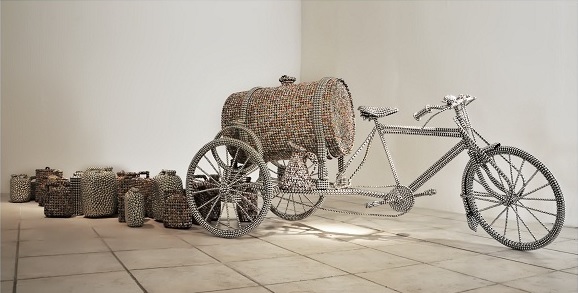 These days even the nearest Paanwala’s profile is available in Wikipedia, irrespective of his contributions to the general jaw training of the city or the large scale graffiti created on the city walls and floors by incessant spitting by the common populace. Only consolation about Wikipedia information is that it never claims to be truth and each point is liable to further editing. When an artist’s major exhibition is held, or an apparently well known person is dead, suddenly someone adds a Wikipedia page. For the former it is a free advertisement and knowledge dissemination, and for the latter it is information sharing for the interested parties. Valay Shende also has a Wikipedia page and the content seems to be created just before the present show ‘Migrating Histories of Molecular Identities.’ There in the page it is said that Shende’s works are often compared to the works of Subodh Gupta. I do not know whether it is a statement of praise or an unadulterated criticism. Whatever it may be, I would like to dispute the fact that Shende’s works are ‘like’ Gupta’s works. First of all, Gupta’s works are done with different home utensils compressed and customised to get the required shape and form. Valay Shende’s works are created out of identical polished metal discs; Gupta’s works are welded together following a random progression (methodical madness), while Shende’s is defined progression where the discs are meticulously welded together in defined lines and curves (clinical precision). You may argue that Gupta’s works too have clinical precision; but I would argue that Gupta’s works are like architectures using engineering and design, while Shende’s works are like sculptures using design and minimum engineering. Even though Gupta has worked on migration (the airport trolley sculptures, sliced Ambassador car top, bronze cast of baggage and so on), Shende’s idea of migration is fundamentally different from Gupta’s. Gupta’s migration is international (people’s movement from nation to nation) and Shende’s migration is intra-national (movement within the nation). Gupta’s works are explosions of materials and ideas, while Shende’s are controlled implosions of materials and ideas. 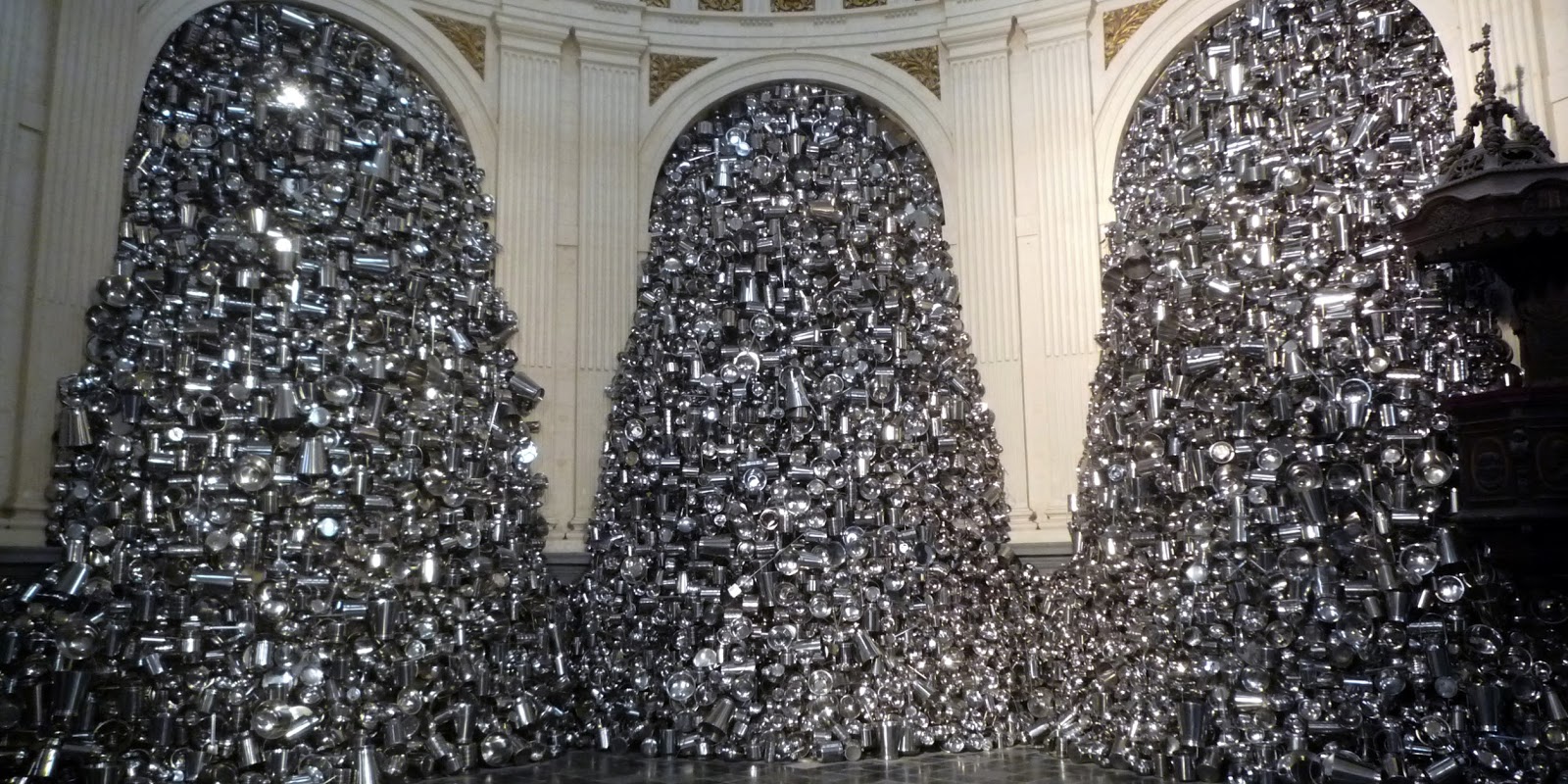 (A sculptural installation by Subodh Gupta)


I am not sure why I go into the comparison between Subodh Gupta and Valay Shende as if I have taken the contract to dispute a passable Wikipedia statement. I do exercise it mainly to state that this work of Valay Shende is closer to the works of Ram Kinkar Baij, ‘Santal Family’ and ‘the Mill Call’. Now, the staunch supporters of Ram Kinkar Baij should not jump into the arena for a lawless fight with me here. What I am trying to say is simple; this work of Shende exudes the feeling that the aforementioned works of Ram Kinkar Baij has been imparting since 1930s. Baij was a modernist, Shende is a contemporary post-liberalization artist. The materials used here are different (Baij used coarse cement and gravel mix and Shende uses metallic discs). But the idea of movement from one sense of economics to another, a transition from agrarian economy to the industrial economy as suggested in the works of Baij is seen in the work of Shende too. That sense is what makes Shende’s works move beyond its spectacular nature and the new media additions. As static sculptures, both Santal Family and Mill Call have brought in this idea of transition, the movement from one place to another as witnessed by the artist, Baij. In Santal Family, we do not know where the family is going; they may be going to a fair, or they may be going back to their home after the work in the fields. But the family unit with its bundles, kids and dog, a total movement (molecular identities) seen in the work make us wonder where exactly are they going? Are they uprooted? If so who has uprooted them? Perhaps, we get the answer in the ‘Mill Call’. In Mill Call we see two women running towards a factory (as suggest by the title) and while running they even try to dry their wet clothes. These women might have been farm workers, but now they are running to the mill. Their movement is no longer controlled by the movement of sun, clouds, winds or rain. They are now controlled by the siren of the mill. 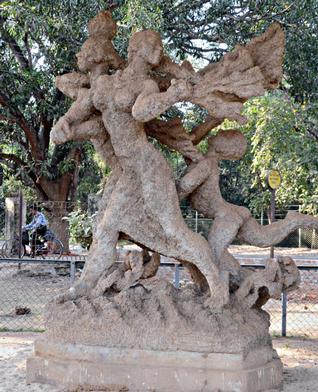 Shende shares the stand with Baij in capturing this aspect of transition. Remaining true to the modern sculpture tradition, Shende understands how Baij had envisioned the transition from the agrarian economy to the industrial economy. In contemporary time, which is called post information technology times, agrarian economies of the rural areas are replaced not only by the industrial one but by buildings from where a transformed model of profit making operates through the sheer power information technology. These poor folks who toil day in and day out to make these glass, steel and mortar structures into one piece in fact do not exactly know what is going to happen to those structures that they have helped in making. They know only this that once a work is done they would be transported to the next site. In Baij’s work, it could be easy to read that the people are not yet displaced; their work places are shifted. Those places are still accessible to them. May be when we come to Santal Family, the family is in a way uprooted. Still there is a hope in their faces as Baij envisions a brave new world for them. They can run to their work place even if they are asked to live elsewhere. But in our times, as represented by Shende, the workers are totally uprooted and they are never re-rooted elsewhere. While Baij’s transition is humane with fledgling possibilities of re-shaping lives in and around the new temples of modernism, the factories, Shende’s protagonists are devoid of such possibilities. Their hopelessness turns them into the icons of desperation; ironically their desperation is never expressed. They are muted actors in a painful drama which is scripted elsewhere and acted in the direst of conditions. 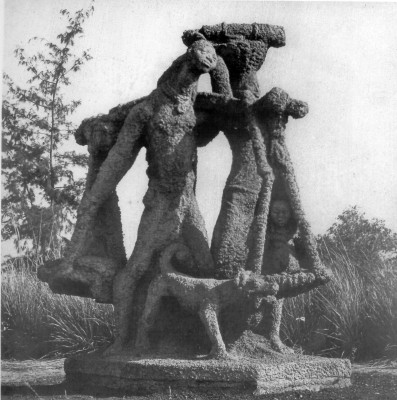 This muteness is loud in the other works of Valay Shende. Whether it is a water barrel carried around to distribute water to the deprived and dispossessed workers who are represented by the silent and expectant cans or it be the trophy heads of a bull, Shende works on the silence of the castrated, homeless, vote-less human beings who are treated one notch lesser than human beings themselves. But they all have a face and they all have an identity that they keep so dear to themselves. For some it may be the yellow helmet or a work coat with fluorescent stripes, it may be a torch, a calendar, a transistor or a cheap mobile phone. But they have their identities in a different form too. They have the passport size photographs taken against the offering of some hope from authorities. Shende transposes these pictures of the dispossessed, or the underclass, on to these metal discs, which turns the general steel feel of the works into something vulnerable. Their portraits together, look like open wounds and the flesh seen under it. I do not remember what the wall text of the show has to say about these but I remember the molecular identities there in the works itching to migrate into a much more liberated world of existence. But unlike the molecules in matter, they are static giving an apparent consolation to our own belief systems and patterns that help us sleep tight at night as if these people who are in transit just do not exist.
Posted by JohnyML at 9:04 PM