Why ‘By All Means Necessary’ 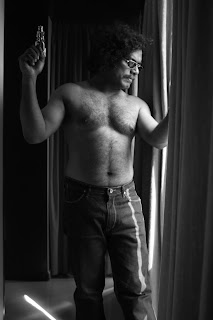 I started this blog on 17th September 2008. Actually, I had registered a blog in the same name almost a year back, which some how I could not keep alive. The provocation to re-start the blog came from my friend and art critic Alexander Keefe. Alex has his own blog and he once in a while posts his observations on Indian contemporary art. Just a few days before our conversation took place at Vadehra Gallery, myself and another friend of mine had discussed the possibilities of starting two blogs mainly for posting ideas, concepts, images and potential works of art. We needed more time to formulate the strategies for running such blogs, hence I decided to start my personal blog to set the ball rolling.

As you have noticed, this blog’s name is ‘By All Means Necessary’. This is a statement formulated by the French philosopher and writer Jean Paul Sartre in 1963 in one his plays titled ‘Dirty Hands’. Later in 1965, the most influential Black American leader Malcolm X used the same phrase in one of his famous speeches. “We declare our right on this earth to be a man, to be a human being, to be respected as a human being, to be given the rights of a human being in this society, on this earth, in this day, which we intend to bring into existence by any means necessary.”

I came across Malcolm X and his philosophy while seriously (and anxiously) going through the history of black revolution in Britain and the US. I was then pursuing a Masters Degree at the Goldsmiths College, University of London and my passion for Black History grew as I spent endless hours researching on the subject in the Goldsmith’s fabulous library. I liked Malcolm X’s fiery first phase and the more integrationist second phase than the pacifist line of Dr.Martin Luther King. One should use all the possible means to achieve freedom and dignity; that was the line of Malcolm X.

In a renewed context of Indian contemporary art, I see the attitude of Malcolm X quite relevant. One should use all the possible ways to pursue truth and critically uphold the value of art and aesthetics. One should use all the possible means to chronicle the history of our times, which otherwise slips through the carnivalesque spectacle of contemporary art scene. I have been doing it through my writings for the last fourteen years. This blog is an attempt to capture the truth value of this spectacular sight called Indian contemporary art. To do this, at times one has to join the party and at times sit on side benches and watch. One has to assume a new personality and walk amongst the crowd and one has to wear the mantle of a detective. One has to take many shapes and articulate what he/she sees. One has to perform many roles to go beyond the material flourish and see the facts. For me this blog is a performative space, where I perform with words and at times with my own works.

The photograph that you see above is ‘performance’ (you may call it a re-enactment) that I did in Mumbai, in a hotel room, in front of a photographer friend. I was emulating an incident from the life of Malcolm X. In a documented photograph in Life Magazine, Malcolm X is seen holding an automatic gun ready in his right hand and looking down through the window curtain, preparing for a counter attack. I enact the same posture, rather without the muscle tension seen in Malcolm X’s body, in a mock retaliatory act against my ‘prospective attackers’. My act becomes a metaphor for the alertness one critic/artist has to maintain in the contemporary context. The image is open to further interpretations, as you like.

In the month of September I posted 13 articles in this blog and circulated amongst a few close friends and well wishers mainly to gather their opinion. To my surprise, many of them became ‘regular’ visitors of this blog. Though many of them post their comments directly in the blog, through emails and phone calls they shared their views on my writings. One of my friends told me that a blog is supposed to be ‘casual’ and longer articles might not sustain the readers’ interest. While agreeing with his observation, I maintain this position that for me this blog is not a ‘casual’ space. There are so many aspects of contemporary art, which could not be expressed through magazine articles. It is a space for articulating those ‘aspects’ that we often miss out in our busy lives.

I welcome you all to this blog. Please do write to me or do post your comments, both appreciative and critical. You may rip me into shreds using your enlightened arguments and I would be really happy to grow with you and share with you.
Posted by JohnyML at 10:30 AM

Be peaceful, be courteous, obey the law, respect everyone; but if someone puts his hand on you, send him to the cemetery.

How to write to you ? no e-mail of yours is published.