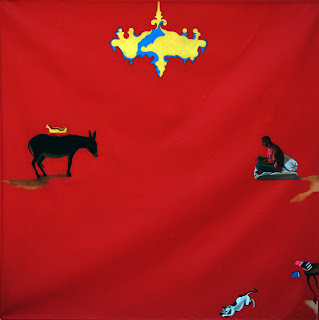 These days I see a lot of cartoons as I have a three year old son who religiously watches certain cartoons everyday. Winnie the Pooh is one his favorite animation series. While watching it with him, I came across this particular donkey whose name is Eeyore. Eeyore, unlike other animals in the series, has a problem; he is existential and this existential issue comes from the constant falling off of his tail. It simply does not stick to his bottom. It falls off and his friends help him to find and fix it back. Besides, his house always collapses, however he tries to make it again and again. Eeyore, with his downcast eyes and tormented looks, is quite loveable. At the same time he makes me think about the representation of donkeys in Indian contemporary art.

In fables, myths and folk tales donkeys come quite often. Always the donkey is treated as a beast of burden, a butt of ridicule and the embodiment of foolishness. However, when it comes to Indian contemporary art, donkeys get a new status; they are treated with some kind of dignity. Recently a young friend of mine, Jyoti Patil who is pursuing a Masters Degree in Amsterdam, sent me a very personal write about her own life. In this ‘story’ she recounts one of her childhood experiences of seeing a group of donkeys in the middle of a road, blocking the flow of traffic. It was a Diwali time and those truant boys around even tied some crackers in their tails to scare them away, but they did not budge. After sometime, Jyoti found a baby donkey lying dead in the middle of the road. Those donkeys were mourning its death!

Perhaps, this touching scene was witnessed by Jyoti’s sister and artist Koumudi Patil also. A few months back, while discussing a gallery project, she came up with this idea of herding a group of donkeys within a gallery space. I thought of it as a good idea though I expressed my reservations regarding ‘executing’ it effectively in the Indian situation. “Had your work been devised for the Saatchi Gallery, London, you could have done it without much problem,” I told her, remembering how the Saatchi Gallery was opened at the County Hall, London, with hundreds of nude ‘performers’ roaming inside the gallery brushing shoulders with well-clothed ‘guests’. “In India, they may appreciate a donkey sculpture or a donkey painting. But I don’t think, we are grown enough to accommodate live donkeys inside the gallery. You may look for a dead donkey inside a glass vitrine full of formaldehyde,” I joked.

But donkeys are still a part of our art tradition. Especially during our contemporary times, the image of donkeys has become something very important and meaningful. It was Bhupen Khakar who first used donkey as a very strong image in his paintings. (I know that those artists who have painted Christian themes have profusely used the image of donkeys. But I am talking about the contemporary times. For me Late Bhupen Khakar is a contemporary artist). In his ‘You Can’t Please All’, Bhupen uses the well known folk tale of a father and son who try to negotiate the presence of a donkey in their journey. While a nude (self representation) figure stands and watches all these happenings there out in the world, from the lower right side corner of the painting, we find the life of donkey gets an important place in Indian art history.

K.M.Madhusudhanan is one of the contemporary artists, who has done a lot of donkey images, especially during his student days in Baroda, where one would come across a lot of donkeys in the streets. He had done a lot of etchings and drawings using donkey as a predominant imagery. Many artists of that time (late 80s), including the Radical Group of artists have used donkey as a predominant image in their paintings (the presence of boat and fish should also be remembered). Donkey for them, unlike in the folk tales became an embodiment of existential pangs and the thankless and fearful life of the human beings. I would say, if horse was the image that asserted the virility and power of the hopeful male human being during the modernist period of Indian art, donkey now represents the counterpoint of it. Donkeys have become a post-modern image of human suffering, migration, dislocation and dispossession.

Look at the works of Manjunath Kamath, he has done so many donkeys in his paintings. Though his minimal but effective narratives, he brings back the image of donkeys from the streets and folktales. These donkeys who we see in Manjunath Kamath’s works, are intellectual beings; in their silence they counter the magnanimous stature of the fake intellectuals. They are not donkeys that grew lesser than horses. They are not horses stunned by times. They are donkeys with their full donkey-ness but declaring their subaltern status as neglected intellectuals. Manjunath places them ironically and introduces them in his narratives structures that impart a lot of surprises.

In Jagannath Panda’s works, donkeys are the emblems of dispossession and dislocation. He emphasizes his migrant status through the symbols of goats and donkeys. Though, unlike Manjunath, he cuts down narratives in his works, Jagannath adds a kind of silence and desolation around these donkey figures. The presence of a donkey in the construction sites (where future townships are built) clearly shows the status of dispossessed migrants in these works. While Jagannath resorts to a kind of seriousness, Manjunath laughs at other happenings around through the mutant presence of donkey. In Manjunath’s works, donkeys laugh and they laugh like human beings in an ironical situation.

G.R.Iranna is another artist, who has used the image of donkeys effectively. Both in his sculptural and painterly works, he introduces donkey as a dominant imagery. Here, in Iranna’s works, donkey represents the victimized human beings, the man in exodus, the one who carries the wounds of an ongoing war and terrorism. In Iranna’s work, the donkey is a carrier of the wounded past, present and future of the civilization itself. In his pivotal work titled ‘Wounded Tools’ he shows a donkey, a life size fibre glass cast, with a saddle full of bleeding weapons in it.

Interestingly, donkeys appear in the works of Delhi artists. In the works of Mumbai artists one hardly sees any donkeys. May be in Delhi, one could see donkeys on a day to day basis. But to see donkeys the artists need to have ‘good’ eyes. Even in Delhi, there are many artists who when it is time to deal with the issues of migration and dispossession or the growing pangs of city life, directly come to the image of cows and bulls that laze around in the middle of the road and choke the traffic flow. The connotations are perhaps pleasant and approvable. But donkeys, the case is different. It tickles your conscience with their ‘unwanted presence’.

Donkeys with no affiliation to any political parties or any religious groups, still move around in our vicinities with their fore and back legs tried together. At times they run as if they were thrown into fit of madness. At times they bray and express their feelings. Most often they stand silently, looking down with sad eyes. If you morph the picture of the existential man on the roads with that of a donkey, you may find them merging well. Look, we are not horses, but we are donkeys, as seen in Indian contemporary art.
Posted by JohnyML at 10:19 AM