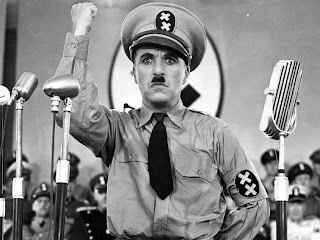 I must remember late sculptor Ashokan Poduval, who had this special ability to adopt any language, speak and interpret the ways he wanted. One day, to compete with Ashokan’s ability to speak in Gujarati, another friend spoke something like this:

“Tamaro kahavat sab kuch avanu che’ (there is no meaning)

“How beautifully you twist facts.”

Charlie Chaplin comes to my mind. In the movie, The Great Dictator, Chaplin plays the role of the German dictator Adenoid Hynkel (a sly reference to Adolf Hitler). In his office he is seen dictating a letter to his beautiful secretary at her typewriter. Chaplin/Hynkel speaks some jumbled up language that sounds like German for a long time and stops. The secretary finishes it with in two strokes on the key board. Then Chaplin says two words and the secretary keeps tying for a long time.

Interpretations could be as hilarious as this.

There is a reason for remembering these two friends (Yes, Ashokan and Chaplin). I happened to be there at the Department of Arts and Aesthetics Auditorium, Jawaharlal Nehru University (JNU), New Delhi yesterday to attend a lecture on Contemporary Chinese Art by Melissa Chiu, Director Asia Society Museum.

After the presentation, it is mandatory to ask some questions even if the lecture is crystal clear. It is always interesting to see and listen the questions raised by students, who think themselves to be great intellectuals and have a strong grip on the subject that they are speaking on.

One of the students raised her hand and the mike was passed on to her. From her confident and accented ‘talk’ what I gathered was this much: she had seen some Chinese art exhibition somewhere (it implied that she had traveled the world) and had found the art works quite ‘radical’. Her question was whether the Chinese ‘state’ supports such radicalism or not.

The student’s confidence was so high that she was making the statement and raising the question in a very casual manner as if she really did not intend to ask the question but to hold the prestige of the institution where she studies high, she was forced to ask. Then came one of the teachers, who was running up and down the auditorium, handing over the mike to the aspiring debaters. Now it was her duty to explain the question in simple English to the honorable director of the Asia Society Museum.

After this charade, one more student raised her hand. This time it was very difficult to comprehend what she was asking. Almost after three minutes of talk what I gathered from her was one word, ‘commodification.’ Melissa Chiu contemplated for a while and answered the question sensibly saying that commodification of art is an unavoidable evil.

If winter comes far spring be far behind? To keep the gender balance intact, one of the MPhil students who was sitting next to me raised his hand. The mike was handed over to him and his question was simple: “As it is already commodified, what is the point in calling a section of contemporary Chinese art ‘cynical realism’?”

He was direct and simple. The answer was there in the question itself. You need not necessarily call cynical realism cynical because its cynicism has already been subsumed. But for classificatory reasons, there is nothing wrong in calling it cynical realism. The same way Radicalism is Radicalism within the state run museums.

Pablo Helguera defines Land Art as something started by Robert Smithson and Walter de Maria to prove that art exists outside the sacred spaces of museums. And he goes on to say that now one can see the examples of land art in your nearest museum.

I like these compulsive questioners. They just can’t sit in peace once some finishes his/her presentation. They provide me with good comic relief.

There is one professor, who gets up after someone’s presentation and takes the mike in hand. Then he starts from somewhere and reaches somewhere else. Most of the time it oscillates between a dramatic/critical monologue and a question. Even if the speaker has not talked anything about a particular issue, our doubting Thomas would drag the whole issue into his own area of interest. Once the thread is lost both by the speaker and the doubting Thomas, it is the moderator’s job to ‘frame’ a question out of what the doubting profession has said.

I always remember that boy who learnt five sentences on cow by heart and went to the examination hall. But the question was to write five sentences about ‘Head Mistress’. He did not have any clue. So he replaced the word cow with head mistress. So the answer went like: Head Mistress is a domestic animal. She gives milk and dung. Milk is a nutritious drink and dung is used as manure.

There is another compulsive questioner whom I meet quite often in seminars. Like our professor, he too jumps up and grabs the mike. Then he asks whatever he wants quoting from Kant to Derrida. One day he went on and on and the session was adjourned for lunch.

During the luncheon at lawn the inquisitive speaker came up to our friend and asked,

“Tell me, I am curious, what was your point?”

“Point….oh …yes…actually I forgot what I was asking. Just leave it. Let’s us have some kulfi,” answered he.

Going by Francis Bacon’s style I could say something like this:

Some questions are genuine. Some are forced and affected. Some are to be kept away like pestilence. So are the questioners.

I wonder when some senior and learned people raise their hands and once the mike is given, shoot questions that sound too pedestrian. I don’t know whether they feel like neglected if they keep silence. One of my JNU friends says that it shows the ‘power craze of the urban elite intellectual.’ They want to be seen, heard and discussed.

I would like to mention one different set of people who laugh loudly, when the speaker causally says a very subtle joke. It is nice, modest and courteous to laugh when someone says a joke for audience engagement and participation. But what about those people who laughs even when the speaker says something dead serious? In seminars I find these ‘laughers’, who look perfect jokers.

My young friend tells me that he likes to ask questions in seminar because he wants to overcome his inhibitions. I tell him it is a good strategy to develop confidence. But what about those people who sound more confident than confidence itself? They don’t stand and watch a work of art. Instead they squat, an extreme way of showing casual-ness.

Let me conclude the story by remembering Chaplin again. Once Chaplin went to participate in a Chaplin Look-Alike competition. He did not win as there were better Chaplins than Chaplin himself.

In seminar circuit, I don’t think Derrida and Foucault would even win an argument, if they really come and attend one in India.
Posted by JohnyML at 6:17 PM

Bursted out in to laughter....
I enjoyed this blog post, as much as I enjoyed RK Narayanan's "The Painter of Signboards".
You made my day.