Glimpses from the God’s Own Country 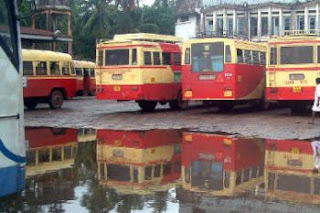 At the Eranakulam bus station, to catch a bus to Kottayam, I wait. It is early morning. I have this urge to say that I stand there ‘alone’ in an island of silence. But it is not true. There are people around me, both natives and visitors.

I wistfully look at these Malayali women with their curly hairs still wet in early morning bath. It is a beautiful sight, quite refreshing. They are all geared up to face the breaking day. I look for the Malayali men wearing dhotis. No, dhoti has become a rare sight here. Trousers have replaced the stereotypical white dhoti. I remember the men in South Korea and Singapore. There ordinary workers and laborers also wear three piece suits, complete with a neck tie. It is an interesting sight to see the men in three piece suits squatting in streets, smoking cheap cigarettes.

In Eranakulam, I don’t see trouser clad men squatting and smoking. A blanket ban on smoking is in place and people seem to obey the government order unlike in Delhi, where I live.

I hear someone speaking in Hindi. There are so many tourists and North Indian dwellers in this city. I remember all those newly married couple whom I saw in the flight while coming to the city. Eranakulam and Kochi are honeymoon destinations too.

There is one good thing about traveling in a flight, which is filled with honeymoon couples. They will not disturb you. They don’t even need two seats. They make two seats into one and create a private world of their own by opening both the tray tables. A clanging of bangles here, a rustling of silk here, a muffled laughter there and few stolen kisses here. And you are either left to enjoy all these secretly or to indulge in your own activities; day dreaming, dozing, reading- in that order or the other way round.

If you are extra observant, you may study the mehndi patterns on these girls’ hands and legs. I study them carefully because there are a lot around me in the flight. And I imagine all of them as exotic reptiles in heat. I am sure this skin is going to be shed in a few weeks’ time.

Why all these walking murals look so fragile and helpless, I ask myself. Till a day before their marriage, they were running around like bold tigresses, negotiating the curves and squaring the circles of an urban jungle. But during honeymoon days they look so threatened and insecure. They are happy only when they speak to someone back home (could be parents, relatives, siblings or friends) over mobile phones.

“Honeymoon couples choose this city these days because there is a belief that honeymooning in Kochi would bring them sons,” my friend sounds serious and I laugh off.

“Seriously man, people come here to have sons,” he insists. Now I have to believe it. I am learning a contemporary myth of the God’s own country. I imagine a host of couples landing in this land looking forward to have sons- India’s perennial preference for male children to continue the family legacy.

Eranakulam has a lot of temples and churches. Kerala is God’s own country not because it is blessed with a heavenly nature but it has given abode to all the thirty three crore population of Hindu gods and all those saints invented and enrolled by Christianity. Mosques too are abundant but then there is only one god there. There is no wonder if people believe that they will be blessed with sons if they honeymoon here.

Suddenly I remember how myself and my wife decided to have a child almost ten years back and look, we were staying in a hotel in Eranakulam! We did not know about this myth then. We did our best but nothing happened. We got our son in Delhi, after many years and we had forgotten the meaning of honeymoon by then. Under the sweltering August weather in Delhi, honeymoon is the last thing you remember.

I locate my bus. Buses have different faces. Some of them smile, some of them grin, some others show their empty gums, some look deeply drawn in thoughts and some look injured and insulted. My bus looks pensive with downcast eyes. It is an Ashok Leyland make.

Most of the Road Transport Corporation buses are red in color. If there is a single yellow stripe like girdle around its body, it is an ordinary bus. If it has a wave like yellow patch around it, it is a fast passenger. If it is predominantly yellow and less red, it is a super fast and if it is green, it is an express. There were light blue buses- they were deluxe coaches, but not seen too many. For information sake, if the board is written in black it is an ordinary bus and if it is in red, it is a fast passenger.

My bus is a fast passenger. Nobody is seen inside the bus. I walk up to the enquiry counter and wait for someone to take my query. There are several drivers and conductors sitting inside the room, chatting- must be politics. Someone comes to the counter and does not show any inclination to answer my question. Anger seethes in me.

I had fought with several transport bus workers in Kerala. They have a strong union and most of the time they just don’t care. Once a conductor refused to give me a balance of three rupees. I insisted that I should get it back. I had a severe verbal exchange with him. I went to the complaint cell, showed my ticket and placed my demand for three rupees. The authority there looked at the ticket and then looked at my angry face.

“Ah…you can get your money back. But this bus does not belong to this depot. Please go and submit it to the depot where it belongs,” he told me.

The bus belonged to a depot, which is two districts away from where I stood. I should travel four hours in the same bus to claim my three rupees! That’s what trade union does to people. They become so strong and they start thinking that the buses are run for keeping the employees fed. They just don’t care. I threw the ticket at his face and walked off. I felt impotent till I caught up with a mainstream flick, in which Mohanlal (a leading actor in Malayalam film industry) thrashed up all the villains including some bureaucrats. Yes, that’s how, we Indians regain our virility. Our dignity is three inches in flaccid stage and while watching a movie it is seven inches. The government overworks to keep us in three inches format.

“That bus leaves at 8.00 am,” finally he tells me with no warmth or human connection. There is enough time.

People read so much in Kerala. It is an argumentative society. All these journals today analyze Mumbai terror incident giving their ‘exclusive’ stories. It is an alert society- perhaps too alert that has rendered it numb and reactionary.

I decide not to buy any magazine because I think I could spend my quality time looking at the passing landscape and scenes, from a moving bus window. It is more informative and exciting than reading that intellectual pulp.

I should take a leak because the Transport Department does not care even if your bladder bursts while in the bus.

I look around for a washroom. I see a typical temple architecture on my right. I think, look, here another temple. But to my shock I find it is a public toilet. Imagine- a public toilet made in the form of a temple!

While in the bus I see so many temple structures- all houses of the neo-rich. Yes, simulated temple architecture in mortar and brick as wood is rare and costlier. Kerala is filled with this sickening sight of temple architecture incorporated into house building. Right from Nedumbasseri Airport to the local toddy shops. They all have the same architectural archetype for reference.

Something is terribly wrong with this society. A society lives on debates unmindfully splurges on what it actively negates in polemics. They don’t understand that they piss and shit in sanctum sanctorum, the ones they severely want to protect.

God has finally left this country, it seems. Architects of vulgarity have taken over.
Posted by JohnyML at 8:37 AM