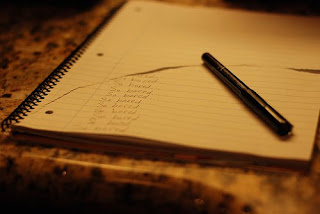 It was my decision to lock myself in a flat in Kochi for ten days and see how much I could write. This flat belongs to a friend of mine. On the first night of my arrival, my friend dropped me at the flat and warned me of two things. One, don’t open the door if someone knocks at it. Two, don’t pay any attention to the white figures if they come to the window and make some sounds.

His intention was to frighten me. And nobody likes to be told things like that especially when he is going to stay alone in a new place. I threatened him of dire consequences and sent him out. He had already prepared the flat for me, which was lying unoccupied for some time. I looked around and found a computer with internet connection, a television set with cable connection and a non-functional kitchen. I had some packed food and two bottles of beer with me. I opened the beer bottle, switched on the television and settled down.

Then suddenly the speed of the fan reduced automatically. I looked at the bulbs, which showed no sign of voltage fluctuation. But then how did this fan slow down? I got up, went to the regulator and turned it to full speed; the fan regained its speed. But then nothing happened. After food I went to bed, keeping all the lights on.

Next morning I got up, opened the window and found a beautiful garden down there. Some puppies were playing in the garden. They were playing with a grown up dog. I looked at them keenly and found that the dog was not their mother. It must be their father or brother from the previous delivery. Then I started counting the puppies. There were nine in number. Nine puppies, a good sight. I remembered the movie, hundred and one Dalmatians.

Luckily, I found an electric kettle in the kitchen. My friend had made minimum arrangements to make some tea for myself. I made a cup of tea and drank it. Then I went outside, bought some bananas. I had also decided not to eat more than one meal a day.

Now I am settled here. I have been writing for the last five days or so. Good experience. Minimum human contact and maximum output.

But then I face the problem of writers’ block in between. How do I get over this problem? I don’t want to speak to my friends or chat with them. I can see many of them online. But my location in Kochi does not make much difference to them because most often we see each other online only. When you meet in the virtual world, location does not matter.

Is it so? Location matters. If my friend pops up in the chat box and tells me that he is Spain, suddenly I find him distant and foreign. But if the same person tells me that he is comfortably sitting at his Delhi office, I feel a lot happy. Those friends who chat with me or telephone me usually, also feel the same about my locational shift. “When are you coming back to Delhi?” they ask. “Why?” I counter question them. “I feel a lot happier when I think you are sitting at your Delhi office space and chatting with me.”

So location matters a lot even when you are connected virtually. I know I am digressing a lot. My idea is to point out how I overcome the writers’ block here.

1) I walk along the wall, as close as possible and grate my body against the wall. I walk up and down keeping my body touching the wall and slowly I start thinking how people might be feeling in confinement. I think about the people in Auschwitz, Andaman, and Guantanamo Bay. Then I like to scribble my thoughts on the wall like graffiti. I imagine I don’t have a pen or pencil with me. So I use my finger nails to write down my pangs. In fact, I don’t do that. I imagine doing so. When I am able to imagine there is no writers’ block. It vanishes.

2) When I don’t feel like walking along the wall, I walk round and round, first slowly, then fast, till my head starts reeling. I count the mosaic tiles on the floor while I go round and round. I find shapes and forms evolving from the mosaic tiles. And I think about how artists arrive at certain forms and expressions. Once I get into that track my writers’ block starts melting down. I could then even visualize the book cover of Foucault’s ‘Madness and Civilization’.

3) Sometimes, I don’t feel like walking round and round. Then I open a shelf on the right corner of the wall and put my head inside and stand like an ostrich for long time till I feel suffocated. I try to close my eyes and feel the self imposed claustrophobia. Then I think about the men inside the hood, the ones in the torture camps, the ones in the gallows and the ones on the horse back. But the horse back ones have some difference. They can see the world outside through the holes cut into the hood. They are Klu Klux Klan people. They attack the black people. I think of black movies, black revolution and the paintings of Manjunath Kamath’s works, where he paints a lot of people putting their heads into buckets, shelves etc. Look my writers’ block is gone.

4) When I don’t want to torture myself like that, I go near the window and look down at the garden and find there are only two puppies left. They play with crows and the crows play with them. When the teasing of the crows increases and the puppies feel uncomfortable the mother rushes at the crows from nowhere. Then I smile and my mind gets filled by some inexplicable feelings. I think about my son, my mother, my wife, my girl friends and all those kids in the world. Mother rushes to save the child. I remember Maxim Gorky’s Mother. I remember Brecht’s Mother Courage. Above all I remember one line from my mother’s diary, which I accidently opened a few days back. It was written in 1997. ‘Johny is working hard and he is shooting up in life.’ I was not shooting up then. People were shouting at me. But I could make my mother proud even then. My writers’ block is gone.

5) When I don’t want to look down through the window, I just walk up to the television set and stand before it, imagining that I am a character in one of the television shows. I give interviews to imaginary people, I become Mickey Mouse, Goofy, I walk like Denzel Washington, fight like Wesley Snipes, then participate in the Star Singer program, act like Mr.Bean, go to bed with Julia Roberts (but they would sensor this scene. They did not even allow this scene with Denzel in Pelican Brief), walk on the red carpet, receive a Grammy Award, give a thanks giving speech at the Man Booker Prize ceremony. I act out all these for an imaginary audience. Then my writers’ block is gone because I have so many things to tell my imaginary audience.

6) I smoke a few cigarettes. But it never helps. May be rarely cigarettes burn out the writers’ block. Smoking tires you. But you smoke again and think about why you are tired. It may help, because a tired mind can bring forth weird ideas.

7) On can go into toilet and sit there for a while. Just concentrate on the bowel movements and think about existential problems of human beings. In flats, especially flats like this, the walls are paper thin, like the hotel room walls. You can hear the bowel movements of your never seen neighbor. Then you imagine the narrative traditions of India, in a tier system. You imagine the cross section of a flat, the anatomy of the flat. So many people in the closets, doing funny things. Yes, toilet is a place, which can dispel many blocks including the writers’ ones. I heard Shah Rukh Khan spends three hours in his washroom. He must be removing his actors’ block.

8) When I don’t feel like sitting like Thinker in a toilet I go before the mirror, strip my clothes one by one and stand in stark nudity. I examine my body inch by inch. I count the hairs inside my nose, make sure that my hairs are graying symmetrically. I look at my tummy, hold my breath and try to see any packs of muscle visible. I think about Arnold Schwarznegger’s documentary ‘Pumping Iron’, Sylvester Stallon’s Rambo and Rocky series, think about American politics and its imperial incursions, and my writer’s block is gone.

9) I wait for someone to call me and when they call me I refuse to take the call. When the ringing stops, I think about the person who rang me up, his/her location, engagements, attitudes, intentions, desires and the reason for calling me. I send sms to some friend and wait for him/her to respond. When the reply comes, I look at the icon of sms, without opening it and imagine what could be the content. Then my writers’ block is gone.