Looking for a Hero 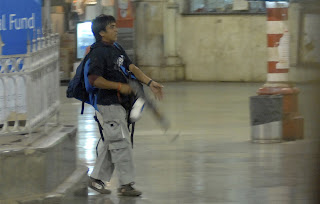 “I always wanted to become a soldier. But then I got into another comfortable living here in JNU (Jawaharlal Nehru University). Now I seriously think that I should join the army.’- a student tells the Hindustan Times.

“We should appreciate the Jawans (soldiers). They have given away their lives for protecting us.”- an artist friend to me over Google chat.

The elite commando force, NSG, the National Security Guards, became the darling of the Indian people, once they gunned down the terrorists in Mumbai and captured one of them alive. People gave them flowers and got their autographs. Newspapers flashed their pictures- them rejoicing after the ‘war’, them in family situations, them in the act of rescuing a wounded child at Taj Hotel, Mumbai.

I remember the picture of this unknown NSG Commando smiling at us with a red rose in his hand. Suddenly I remember something uncanny: the picture of an unidentified university student waving his hands before the armored vehicles rolling in front of Tiananmen Square, China.

I remember the pictures of angry mobs and angry family members of those army personals who laid down their lives at the Kargil Hills. Then we screamed, ‘we are wasting precious lives on an unwanted war.’

Today, friends send me pictures of protesting crowds all over India, holding placards that congratulate the brave deeds of the NSG Commandos.

I cannot get over this Mumbai Terror episode. I write about it again and again.

I am happy at least finally our NSG Commandos have been brought into some use. Otherwise, they have been accompanying the useless politicians of India, guarding their lives from the ‘people’ of India. I have seen so many of them sitting wearily in the open Maruti Gypsies, in full combat attire. I always wonder why any one of them never raises his weapon against these politicians.

They will not do it because they are trained to work for a cause- that is protecting whatever they are assigned to protect. They are not machines, but trained human beings.

I congratulate them. Like any other Indian who watched television channels, I too got goose pimples when I saw them being air dropped at the top of Taj and Nariman House. I wanted to become one of them. My empathetic relationship with war heroes.

I don’t feel any surprise when I listen to an intelligent woman artist praising commando action nor do I get shocks when I hear someone in JNU expressing his wish to join the army. It is all about empathy.

It is all about a country, which is looking for the Heroes. Our heroes have been dead and gone. The young generation has expressed its revulsion for the stereotypical Indian politician. Now what India needs is a hero. This country has been desperately looking for a hero for sometime. Mumbai Terror episode has given us a new set of heroes- the NSG Commandos. Could they be our real heroes for long?

Don’t call me a traitor or a deviant. Let me tell you, in the Mumbai episode, the NSG Commandos are not the real heroes. They are the ‘heroes’ who finally go back to home and hearth, or they are the heroes who go back to their loved ones. Then as the narratives say, ‘they live happily ever after’ because we don’t come to know what happened to their lives. We need a happy ending.

But the other narrative goes on- the narrative of the real heroes, whom people want to emulate. In the Mumbai episode, the real hero is the captured terrorist. Newspapers tell his name and he is referred as Kasav. (I can go to google and look for his real name. But I don’t want to do that)

Why do I call him a real hero? The reason is that people, after the adrenaline rush, recognize one thing- this guy stood for what he believed right. He is not an underworld don. Nor is he a professional pirate. He is a trained soldier of Allah, or he is made to believe that he is one. Like the NSG Commandos, he is also on a mission and he obeys only one command- the command of his terrorist sect, which trained him and made him believe that after attacking a place like Mumbai he would go back to his country, if not he would reach the heavenly abode. Any person with commonsense can understand that there is not even a remote chance of him going back. But he believed that he would go back to the heavenly abode of Allah. He told this to his interrogators without feeling any remorse or regret of his act.

Here is Kasav, a fourth standard drop out, who now speaks ‘excellent English, has a good knowledge of computer and software, trained in handling sophisticated arms and ammunitions, well versed in Geo-Mapping systems and satellite communication systems’, who has become the face of the terror. His face was flashed all over the world. Newspapers made logos out of his face- a logo of terror.

India, a country with millions of school drop outs, has all the potential to produce millions of Kasavs. I don’t mean that they all would go and attack Pakistan. But they would become local heroes by joining local terror camps- to terrorize their own people. Or they would become heroes by helping the people around them. To become local heroes, they should believe in something. They need an anchor. Extreme ideologies are always comfortable anchors for directionless people. The majority of Indian youth with no direction from political system would look at extreme ideologies, whether it be Maoists, Hindu, Muslim, Left or Right, that offer a heavenly abode.

If the Indian youth, irrespective of their intellectual abilities or educational backgrounds or cultural positioning, want to emulate the NSG Commandos, that shows they need a disciplined anchor. The NSG director has already said that it is an elite force, so it cannot open shops in all the parts of the country. Then would you like to join army? No, it is not as glamorous as the NSG. What about Police? Oh, it is a corrupt force. So NSG, NSG, NSG. If not, anything that would give us a direction, an anchor and a disciplined practice to transcend our selves (Read it as reaching the heavenly abode).

With a failed political system, Indian youth is ready to launch themselves into a new course- the course of extreme ideologies. Either they would consume more or when they fail to do that they would become local Kasavs.

Am I sounding too negative?

Let me take an example from Bollywood. In the film ‘Fanaa’, Amir Khan is shown as a terrorist, first working as a ‘drop out’ guide in Delhi, then as a top class business man elsewhere, then as a top ranking official in Indian army. He gets himself conscripted in the Indian Army, works hard to climb in ranks- all for reaching his aim, sabotage the country. Finally he is shot dead by his own wife.

The film was a huge hit when it was released. Why, because we identified with the man with a mission and anchor in life. He could do anything to achieve his goal. He was a Kasav.

And we will forget NSG Commandos also.

This admiration is just an adrenaline rush. We will pardon our politicians. May be we will elect more egalitarian politicians in future.

But we will forget the heroes who go back to their families.

We will remember those who subverted our thinking with daring, missionary zeal and anchor.

I stop my car and bike before the stop line at the read lights. I am not in a rush to reach anywhere because the journey itself is my destination.

(Illustration- Kasav in action at Mumbai CST)
Posted by JohnyML at 1:18 PM

completeley agree with ur thoughts...on a dfrnt note...that is not an illustration...it is a photograph taken by sebastian d'souza...i doubt u asked him before u nicked it...atleast have the decency to give him credit...am sure u do know under what circumstances he took the photo...its unfair to call it an illustration...and rather sad to not even credit the man for his work