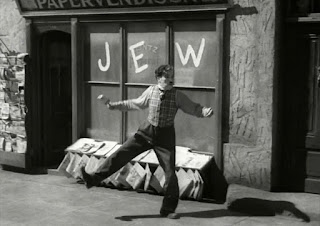 (marking a space, from the Great Dictator)


There is no support better than the support of the people. They support you with all their might if you stand for them and stand with them. That also does not mean that the support could often be translated into electoral success. People may understand your worth, embrace your ability to work with them and for them, but at the same time they may even send you messages saying that you are someone who should be staying out of the power that corrupts. They may fail you in the electoral arena but they will love you and follow you. One day, when they decide that it is time for you to take up the reigns of the governance they will let you do it. People judge and when they judge they judge absolutely. That does not mean that their judgment should be right always. When their judgment goes wrong, they themselves pay for it with their lives, if not for ever but at least for five years.

When you read this, you may think that I am anticipating an electoral defeat of the AAP, a political platform that I have chosen to the serve the people or to articulate the issues of the people. I know that I am not that kind of person who has the ability to handle complicated political issues. But I understand political issues so long as those are about people and their problems, not about the legal tangles, technical complications and mazes of corruption. When you are not corrupt and you have the ability to work with the people and work for the people, things become much easier. Today morning I went out with my senior front who I consider as my leader in my village, and started writing ‘AAP’ large on the walls. There was not a particular intention to choose this auspicious day to perform this public act of graffiti writing on the walls. Today is a very special day for the Keralites as they celebrate Onam today by cleaning homes and lighting the lamps. 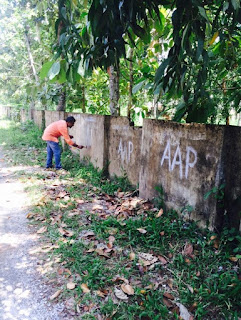 (marking the walls in my village)

I am not so keen about lighting the lamps anymore. I like lit lamps but which I believe that should be lit everyday with the same verve that people show during the Onam days. Lighting the lamp means dispelling darkness. It is a symbolic act in the days of electric lights and illuminations. An ancient way of dispelling darkness has now taken a different meaning; symbolic and pious. When you light a lamp you light a lamp in the minds and hearts of the people. It is supposed to remove ignorance. But people in Kerala generally are immersed in ignorance. The more they light the lamp the more they go into the deep darkness of ignorance. Onam has become a shopping spree. People shop every day and they do shop on the Onam days also. People used to shop during Onam days once upon a time because those were the days when people gathered enough money to spend and celebrate. In a limited economy it was the only way to spend or buy new things. Today, people have a lot of money and they spend as if there is no future.

I have so many reasons to feel aversion towards Onam. First of all, I have not been celebrating it for the last twenty two years. And after my school days most of the Onams had bitter memories. During the school days we had anticipated the Onam days. We could play, feast and celebrate. For ten days, we did not open our text books. In college, I started understanding the economics of Onam. It needed a lot of money to celebrate Onam. Anything and everything had to be tallied with the money that one had to spend. Slowly I started moving away from it. The places of celebrations where one could enjoy Onam without spending money were taken over by concrete buildings. The public places were turned into the carnival of hooliganism. Today, the complexion of hooliganism has changed considerably. On its place a new Hindu verve has come in. I hate that. Onam did not have anything to do with Hindus particularly. All and sundry used to celebrate it here. Now, it has become a celebration of Hindus. 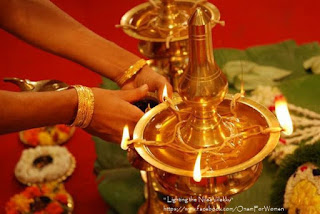 Decision to go out to paint the walls was largely depended on the special nature of this day. At home, they said today they were all going to eat vegetarian food. But I could sense that they were going to make fish. People have fixed a day for meat also. That is on the third day of Onam. That is a sort of permissible adjustment. But what about drinking liquor. I was out to book the walls with my friend. I saw a few very ‘respected’ people in my village sitting in their cars and drinking liquor in the morning itself. I asked my friend why they could not drink at their homes. He told me that they were respecting the day. Ah…that’s it. They can drink inside the cars but they cannot drink at home. People drink as if there is not tomorrow. We went out to paint the walls because we thought it was the right day for doing it. WE DID NOT have anything to do today. Some people thought that we wanted to show our rebellion. But in fact there was no point in showing our rebellion to anybody. While they all want to go by the norms of the society, we just want to tell them politely, our path is different. We are in the same direction but the path is slightly, for them ‘off the right’ and for us, ‘right there on the track’.

I was cycling down to the party office in the evening. At the market junction I met a friend of mine. He has been working in some gulf countries and has come back just now to celebrate Onam. He told me that he was rushing back home to light the lamp. I said that was okay and we would meet soon. He asked me where I was going. I told him about my routine visit to the party office in the evening. He asked me to join for a drinking session once I am ‘over’ with my party work. I politely declined his invitation. He decided to dangle some carrots before me saying that he has brought some good ‘Scotch’. I smiled at him and peddled away. ‘Scotch’ is a catch. Many people would fall for it. I am not a new convert to the religion of non-drinkers who would preach from the roof top against the vices of drinking. My reason for declining that offer was simple and complex at the same time. Whatever scotch it is I am not tempted by anything in this world. If I want to drink I will definitely drink. If I don’t want nobody can force me, that simple it is. It is also complex because I do not understand why people show so much of Hindu fervor in rituals and once done they rush to hold the bottle? I do not like this hypocrisy and in multiple levels of perspectives that include religious, ethical, moral and political, I oppose such breaching of customs. 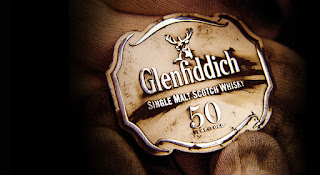 (a scotch I learned to enjoy)

I really wanted to eat beef today because I wanted to tell my mother and sister that there is a lot of hypocrisy in saying that Onam days are vegetarian days and then eating fish covertly, finding flimsy reasons for making a non-vegetarian dish. I spoke to them of getting some beef or chicken today. But then they were like Hindu fanatics. They put their foot down and said that they will not allow ‘non-veg’ at home today. I could not understand the double standard of my own family members. If they are like this, how the other people would be. It is a difficult world of funny ethical standards. Hence, I decided to go and eat beef today at least to tell myself that I was not a hypocrite. But surprisingly all those shops that sell beef fry and parota were closed for lighting the lamp. What a pity! But people are very interesting. Whether they show double standards or not, if they show flimsy ethics or not, they are very poor and insecure. Hence they rush to judge people. But after judging, when they are left alone they face their conscience and they feel ashamed of themselves. So when they see you alone on the road, walk up to you and say, ‘Brother, we are with you.’ Thank you.
Posted by JohnyML at 9:37 PM